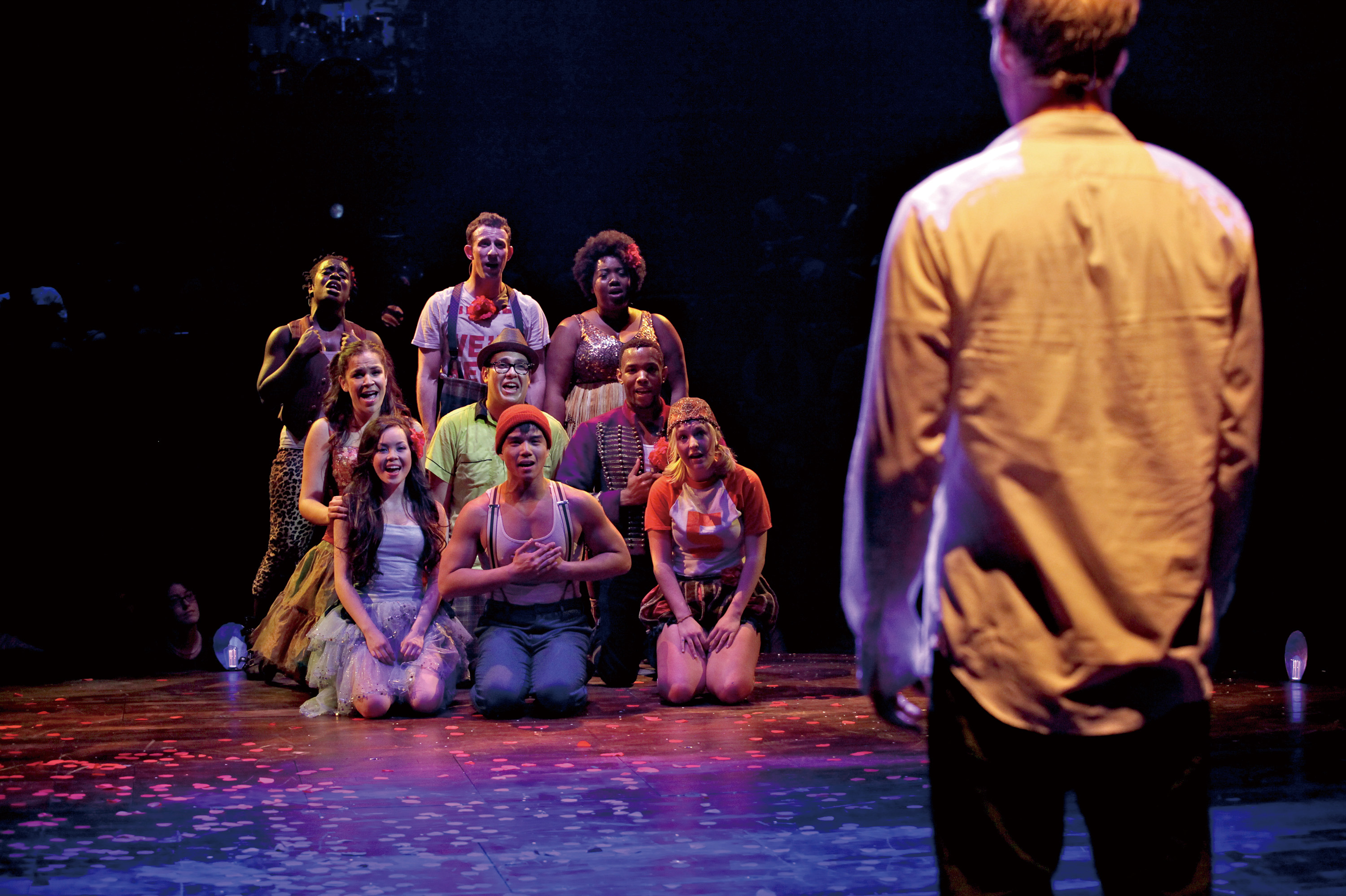 One was waiting tables at a Times Square seafood restaurant. Another was in Disney films and on tour with the Jonas Brothers. A third had performed at Carnegie Hall, but wondered when she’d land theater’s biggest prize.
All three — George Salazar, Anna Maria Perez de Tagle and Celisse Henderson — are overjoyed to be making their Broadway debuts this month in a revival of Stephen Schwartz’s “Godspell.”
“For me, it’s a dream come true,” says Perez de Tagle while the others nod.
The trio is part of a 10-person cast that stars Hunter Parish, whose credits include Showtime’s “Weeds” and Broadway’s “Spring Awakening,” as Jesus but also has plenty of young performers making their first foray onto a Broadway stage.
The hip musical retelling of the New Testament’s Gospel of Matthew opens Monday at the Circle in the Square Theatre.
The Tony-nominated score features the songs “Day by Day,” ‘’Turn Back, O Man,” ‘’Prepare Ye the Way” and “Light of the World” and the story — updated with modern jokes, including references to Kanye West and Occupy Wall Street — hits an infectious, hopeful tone.
“Godspell,” which was an off-Broadway and Broadway smash in the 1970s and was made into a film in 1973, has been a mainstay of church groups, high schools and colleges ever since. Performers such as Jeremy Irons, Zach Braff, Gilda Radner, Madonna, Queen Latifah, Alice Ripley and Jon Hamm were in productions as young people.
In an interview deep below the theater, Salazar, Perez de Tagle and Henderson laugh and joke as they describe how they each took very different paths to end up singing and dancing together.
“One of the most beautiful things about being in this group is that everyone involved is so unbelievable grateful to be here, for one reason or another,” says Salazar, 25.
The three are also soaking up media attention: They’ve been on “Late Show With David Letterman,” photographed for Vanity Fair and were transformed into cartoons for a recent Broadway-themed episode of “South Park.”
Salazar, who hails from Kissimmee, Fla., was serving drinks and dinner at the Bubba Gump Shrimp Co. in Times Square when he got a call this summer about the “Godspell” auditions. No problem, he thought: He had been in the second national tour of “Spring Awakening” and had stored up a few go-to songs.
But there was a catch. His manager said producers of the musical were also asking performers to prepare their own improvised take on a Bible parable. And Salazar had little time to prepare — his audition was the next day.
“Here I am with shrimp on trays and drinks in my hands, and I’m going, ‘When am I going to do this?’” he recalls.
Three months and five auditions later — including a nerve-racking one in front of Schwartz, who also composed the music and wrote the lyrics for “Wicked” — Salazar learned he had landed a role when his phone rang.
“I lost it. I was a sweaty, crying mess in the hallway on the ground. It was a moment I will never forget,” he says. In honor of that moment, Salazar says he’ll be wearing special Nikes on opening night featuring the number “08-26” — Aug. 26 — the day he was cast.
Perez de Tagle, the baby of the group at just 20, was flying into New York for a promotional event from her home in Los Angeles when her manager suggested she go to the “Godspell” audition.
She had begun her career on stage in regional productions of “Cinderella,” ‘’The Wiz” and “The King and I” and lately had appeared on the Disney Channel’s series “Hannah Montana,” and in such films as “Fame” and “Camp Rock 2: The Final Jam.” Last year, she toured with the Jonas Brothers and Demi Lovato.
But her heart was on stage, even if she wasn’t familiar then with “Godspell.”. Multiple callbacks — included flights back and forth from Los Angeles — made that dream possible and now she has happily moved to New York and started a new life.
“This whole journey, with these amazing people, is honestly the best thing that ever happened,” she says, her voice cracking with emotion. “I’m different now. And it’s all because of them.”
Henderson’s route has been the longest and most tortured. She was one of three actors in an earlier production of “Godspell” performed at New Jersey’s Paper Mill Playhouse in 2006. It was to make the jump to Broadway two years later, but the economic crash made that impossible.
A native of Oakland, Calif., 27-year-old Henderson has amassed varied credits: She was seen off-Broadway in “In Transit”; had a recurring role on “The Electric Company”; was in a national touring company of “Wicked”; and released her debut album “Show and Tell” last year. But Broadway was elusive. Until now.
“It’s sort of come in a beautiful time in my life. I’ve been working in the business since I was 17,” she says. “Now it’s become the best thing that’s ever happened to me.”
The three stress how fun and close the cast has become, a feeling perfectly in tune with a musical that is about 10 people who are reclaiming their joy. “It’s not like work for us. It’s playing,” says Perez de Tagle. “It’s just so much fun.”
“There are no egos, there are no personality clashes. Everyone works so well together and we have so much fun,” adds Salazar. “We hope that there’s a real long healthy run because, I don’t want to stop working here.”