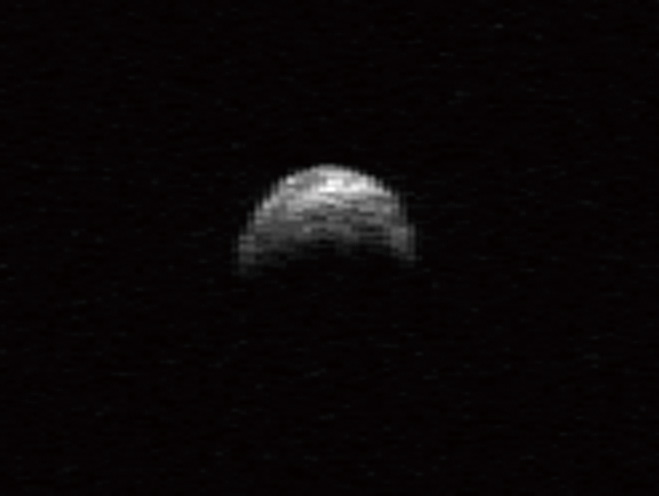 An asteroid bigger than an aircraft carrier will dart between the Earth and moon on Tuesday — the closest encounter by such a huge rock in 35 years.
But scientists say not to worry. It won’t hit.
“We’re extremely confident, 100 percent confident, that this is not a threat,” said the manager of NASA’s Near Earth Object Program, Don Yeomans. “But it is an opportunity.”
The asteroid named 2005 YU55 is being watched by ground antennas as it approaches from the direction of the sun. The last time it came within so-called shouting distance was 200 years ago.
Closest approach will occur at 6:28 p.m. EST Tuesday when the asteroid passes within 202,000 miles of Earth. That’s closer than the roughly 240,000 miles between the Earth and the moon.
The moon will be just under 150,000 miles from the asteroid at the time of closest approach.
Both the Earth and moon are safe — “this time,” said Jay Melosh, professor of Earth and atmospheric sciences at Purdue University.
If 2005 YU55 were to plow into the home planet, it would blast out a crater four miles across and 1,700 feet deep, according to Melosh’s calculations. Think a magnitude-7 earthquake and 70-foot-high tsunami waves.
Scientists have been tracking the slowly spinning, spherical, dark-colored object since its discovery in 2005, and are positive it won’t do any damage.
“We know the orbit of this object very well,” Yeomans said.
The asteroid stretches a quarter-mile across. Smaller objects come close all the time, Yeomans noted, but nothing this big will have ventured so close since 1976.
And nothing this large will again until 2028.
Radar observations from California and Puerto Rico will help scientists ascertain whether the asteroid is pockmarked with craters and holds any water-bearing minerals or even frozen water.
Amateur astronomers would need a 6-inch-or-bigger telescope and know exactly where to look to spot it.
Astronomers consider 2005 YU55 a C-type asteroid — one containing carbon-based materials. “It’s not just a whirling rock like most of them,” Yeomans said.
Such objects are believed to have brought carbon-based materials and water to the early Earth, planting the seeds for life.
The discovery of water-bearing minerals or ice would support that theory, Yeomans said.
This is the type of asteroid that NASA would want to aim for, with astronauts, Yeomans said, especially if frozen water is found. Such asteroids could serve as watering holes and fueling stations for future explorers, he said.
An asteroid is actually on NASA’s short list for destinations.
President Barack Obama wants astronauts headed to an asteroid and then Mars in the coming decades.
That’s why the 30-year space shuttle program ceased this summer — so NASA could have enough money to get cracking on these new destinations.
As for an actual strike by an asteroid this size, that’s estimated to occur once every 100,000 years or so.
An asteroid named Apophis — estimated to be 885 feet across — will venture extremely close on April 13, 2029 — but will not strike. It has a remote chance of hitting Earth when it comes around again on April 13, 2036.
Scientists said information gleaned from 2005 YU55, as well as other asteroids, will prove useful if and when it becomes necessary to deflect an incoming Armageddon-style rock.