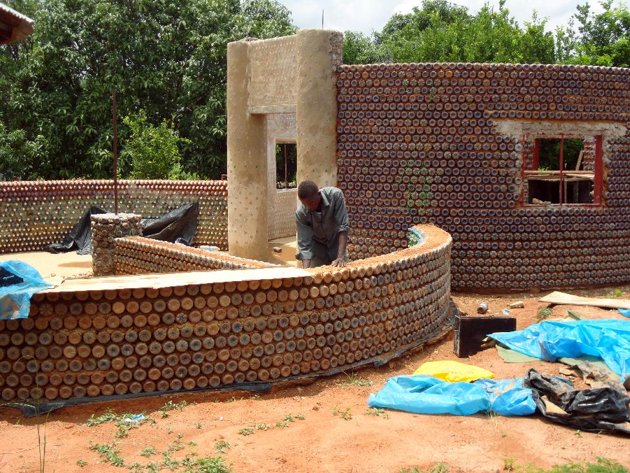 (AFP) Pick up plastic water bottles that litter Nigeria’s roads, canals and gutters and build a house where people can live.

What a group of activists did was come up with a plan to build a house using those bottles, providing what they say is an environmentally smart strategy of chipping away at a housing shortage in Africa’s most populous nation.

With the prototype near the northern Nigerian city of Kaduna now well underway, the group wants to extend its efforts and build more, aiming to unleash what they say is some long bottled-up potential.

The project was initiated by the Kaduna-based NGO Development Association for Renewable Energies (DARE), with help from foreign experts from Africa Community Trust, a London-based NGO.

Sitting on 58-square meters (624-square feet), the two-bedroom bungalow looks like an ordinary home, but it differs in many ways. When completed, the house whose construction started in June will be used to train masons in building such structures.

It is made from capped, sand-filled plastic bottles, each weighing three kilograms, or nearly two pounds.

The bottles are stacked into layers and bonded together by mud and cement, with an intricate network of strings holding each bottle by its neck, providing extra support to the structure.

Bottle caps of various colors protrude from the cement-plastered walls, giving them a unique look. Those behind the project claim the sand-filled bottles are stronger than ordinary cinder blocks.

“The structure has the added advantage of being fire proof, bullet proof and earthquake resistant, with the interior maintaining a constant temperature of 18 degrees C (64 degrees F) which is good for tropical climate,” Yahaya Ahmad, the project coordinator said.

With the right adjustments to the supporting pillars the building can be as high as three stories, but can go no higher due to the weight of the sand-filled bottles, Ahmad said.

The house is also designed to produce zero carbon emissions as it will be wholly powered by solar panels and methane gas from recycled human and animal waste.

“Nigeria has a serious waste and energy problem, and this project is one small step towards making positive changes,” said Katrin Macmillan, a British environmental activist involved in the project.

Construction is estimated to require 14,000 bottles. Environmental experts say Nigeria, a country of some 160 million, throws out about three million plastic bottles daily.

Plastic houses are cheap to construct as it costs a quarter of the money required to build a conventional house. Nigeria has been grappling with a deficit of 16 million housing units.