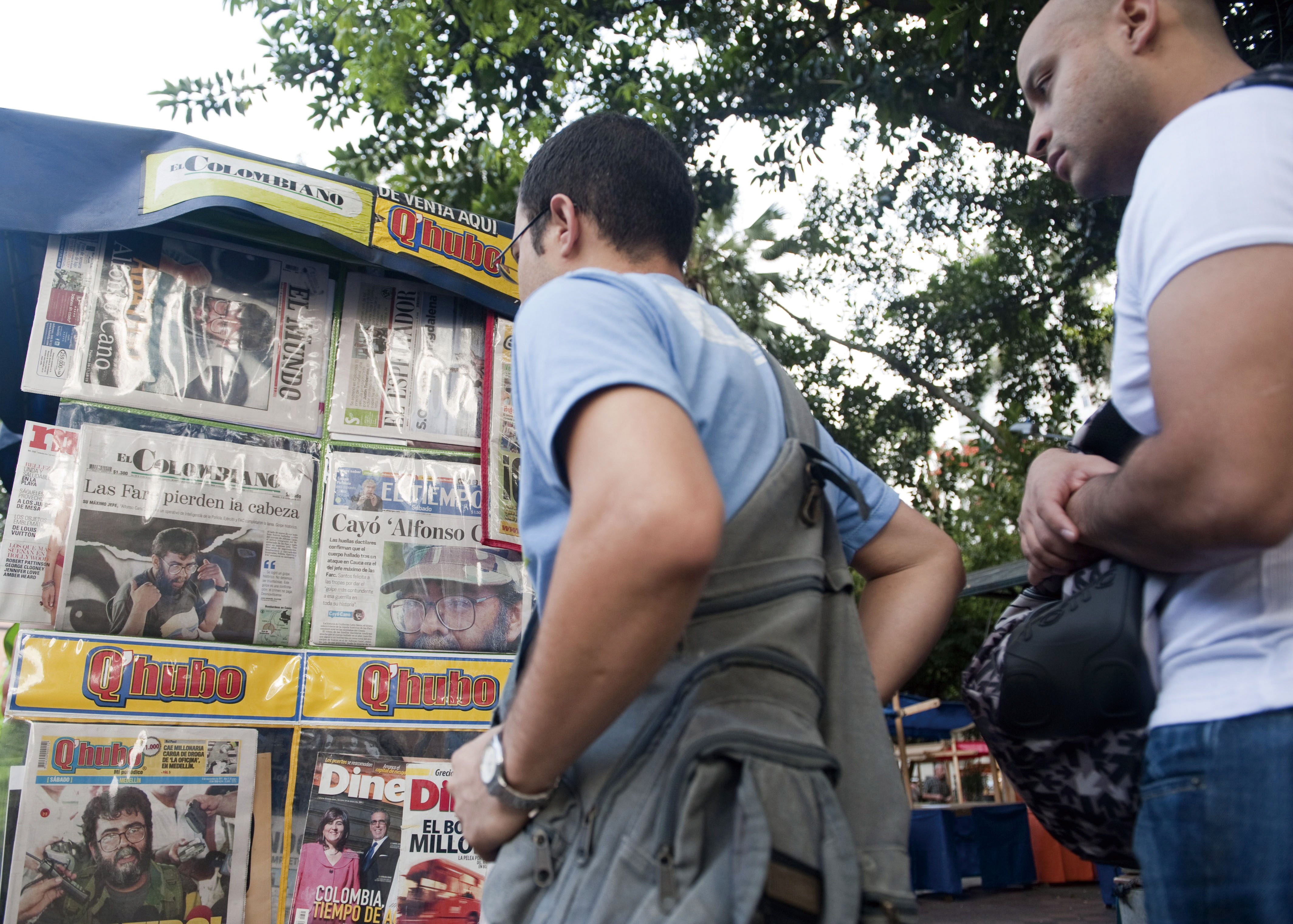 The killing of the top commander of Colombia’s largest guerrilla group dealt what might be the most severe blow yet to the four-decade-old insurgency, but security experts said Saturday that the rebels still had the ability to regroup and carry on the fight.
Elite Colombian forces had been hunting the commander, Alfonso Cano, 63, since he took over the Revolutionary Armed Forces of Colombia, or FARC, three years ago, before they killed him near a rebel camp in the remote southwest on Friday.
President Juan Manuel Santos hailed the raid as “the most devastating blow that this group has suffered in its history.”
“I want to send a message to each and every member of that organization: demobilize,” Santos said in a televised address. “Because if you don’t, as we’ve said so many times and as we’ve shown, you will end up in jail or in a tomb.”
Indeed, the rebels have suffered numerous setbacks in recent years. The guerrillas’ legendary leader, Manuel Marulanda, died of a heart attack in 2008. Earlier that year, Colombian forces killed FARC’s second in command, Raul Reyes. Last year, they killed the field marshal known as Mono Jojoy.
See related story on page 7
Hundreds of rebels have deserted in recent years, thinning the group’s ranks from an estimated peak of 17,000.
Still, FARC, a Marxist-inspired group that has financed itself from the proceeds of its cocaine trade and abductions, has been able to carry out deadly attacks on Colombia’s security forces. In the space of a few days last month, one attack attributed to the group killed 10 soldiers in the province of Narino and another killed 10 soldiers near the border with Venezuela.
“The military forces can take a deep breath,” said Ariel Avila, a conflict analyst with the Bogota research group Arco Iris. “But this isn’t the end of the guerrillas. They still have some time left.”
Avila said that Cano’s killing dealt a political blow to FARC, since he symbolized the group’s small amount of support in urban areas, as well as a military blow, since Cano had overseen a more aggressive strategy of holding ground against advances by Colombia’s army.
Cano was a bespectacled, bearded former anthropologist who joined FARC after dabbling in university politics in Bogota, the capital. Born Guillermo Leon Saenz, he grew up in Bogota’s middle class, and his bookish appearance separated him from others with rougher origins in FARC’s high command.
The attack on Cano’s bastion in a remote, forested area of the Cauca region in southwestern Colombia began with a bombing raid around dawn on Friday. Cano then fled the rebel camp, but hours later special forces soldiers caught up with him and surrounded him and his men, the newspaper El Tiempo said, citing military sources.
The Colombian forces, with assistance from police intelligence operatives, fired on Cano’s group, then retreated for about two hours, El Tiempo said. They attacked again with even heavier fire, after which Cano was found dead. The Associated Press reported that he was hit by three shots.
Officials said the attack killed three guerrillas – two men and a woman. Initial reports said four rebels had been killed. In any case, the rebel unit accompanying Cano seemed to be surprisingly small.
Defense Minister Juan Carlos Pinzon said Cano was clean shaven when he was killed. “His wallet, glasses and weapons were recovered,” Pinzon told journalists in Bogota.

Cano’s body was taken to Popayan, and photographs were distributed to the Colombian news media. Pinzon declined to comment on whether the United States, the top provider of military aid to Colombia, had assisted in the operation.

Despite the killings of prominent rebels, Colombia’s war against FARC and other armed groups has entered a complicated new phase. Advances against FARC and the National Liberation Army, or ELN, a smaller guerrilla group, have squeezed the insurgents into border areas with Venezuela and Ecuador.

Santos has improved relations with both countries, and Venezuela and Ecuador seem to be cooperating more with the capture of midlevel rebels. But once the rebels cross Colombia’s borders, they still face much less pressure than they do from the well-trained Colombian forces.

Two FARC commanders who have operated along Colombia’s border with Venezuela, Ivan Marquez and Jose Benito Cabrera, who uses the alias Timochenko, are thought to be contenders to take Cano’s place but are likely to face challenges in maintaining unity among the group’s various factions.

FARC’s weakening has also raised the possibility that a new top commander may engage in talks with the government to seek an end to the war. Gustavo Petro, the newly elected mayor of Bogota and himself a former guerrilla with the M-19 group, said, “Dialogue is the only way.”

Some officials speculated that while Cano’s killing was by no means the end of the war, it might have finally marginalized FARC as a security threat.