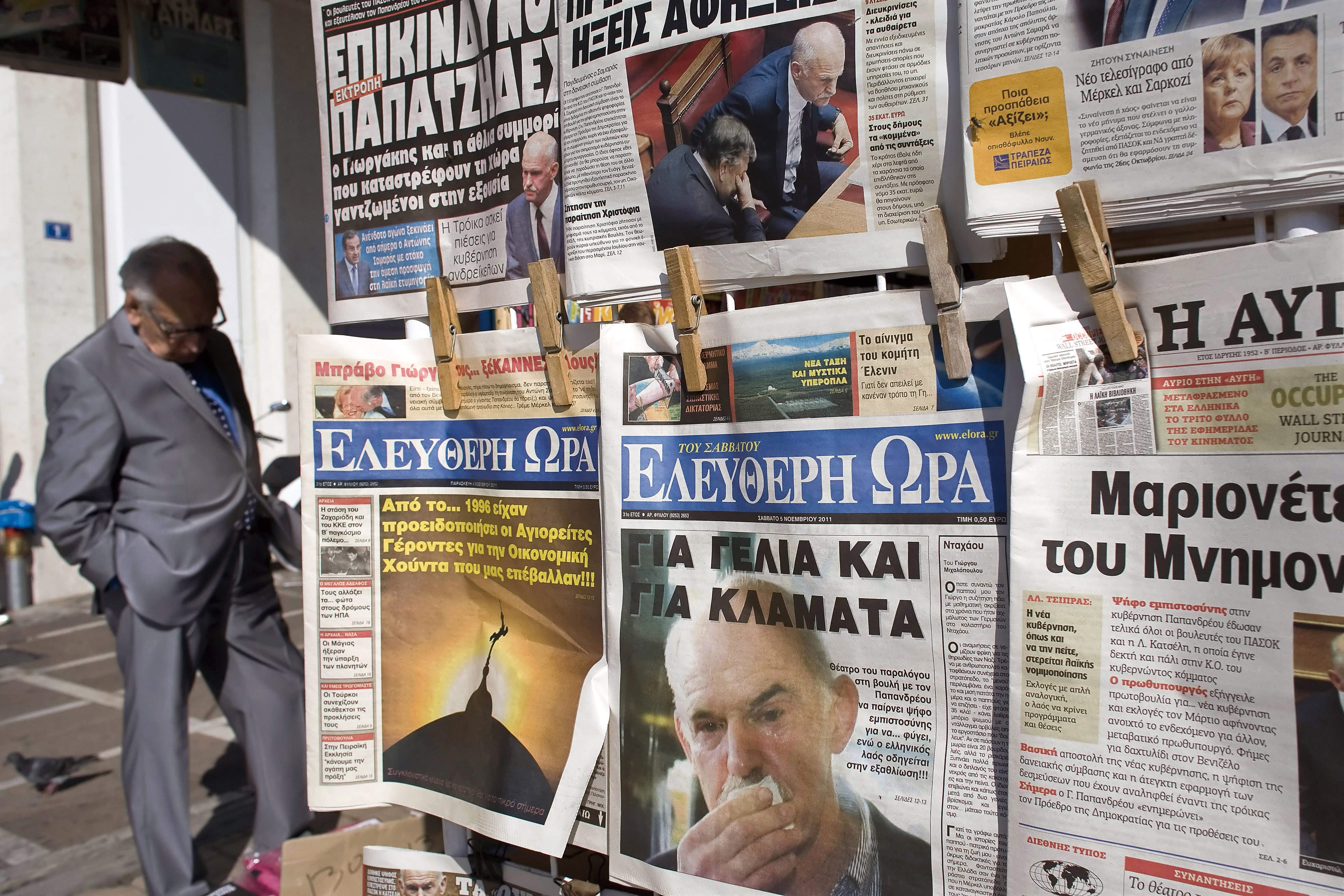 Hours after winning a crucial confidence vote that made it more likely Greece would receive the foreign aid it needs to prevent a default on its debts, the country’s leaders appeared to be enmeshed once again in the type of domestic political wrangling that threw Europe and its markets into turmoil last week.
Prime Minister George Papandreou took the first steps Saturday to try to form a unity government with the opposition, a move he said was necessary to steer the country out of danger. But by Saturday evening, the two sides seemed stuck in position, with the prime minister making no promises to leave power – a key demand of the opposition – and the top opposition leader reiterating his call for early elections and branding Papandreou “dangerous for the country.”
While such stands may be nothing more than clever negotiating strategies to win concessions, any sign that Greece may be headed for a poisonous stalemate is sure to rattle other European leaders – and creditors – craving stability.
The continued political upheaval comes at a time when Europe can least afford it.
The EU wants the Greek Parliament to approve a new debt deal as quickly as possible to guarantee continued foreign support and avoid the risk of default on its debts. To the extent that the financial crisis is partly a matter of perception, any delay would be problematic. But with Italy already at risk, analysts say, further delay could be disastrous, allowing the contagion to spread there.
“It’s not just about Greece, it’s about the whole situation of overhung debt in Europe, of Italy and others which are more capable of bringing down the system,” said Ian Lesser, the executive director of the German Marshall Fund’s Brussels office.
Some of the damage has already been done.
Fears over Greece have already helped to compromise Italy’s position, pushing its borrowing costs to 6.5 percent, a record high since the country adopted the euro and a burden the country might not be able to bear for long. High borrowing costs helped tip Greece, Portugal and Ireland into deep enough trouble that they needed bailouts.
Those costs could ease on Monday. But analysts say coming up with a workable plan in Greece – or even just papering over its problems – will be necessary to buy time for Italy, which is mired in its own deep political troubles and which would be much more difficult to bail out because its economy is larger.
Charles Grant, the director of the Center for European Reform, a London-based research institute, said that if Greece defaulted or prepared to leave the eurozone before the bloc could build a big enough bailout mechanism “and before there’s a credible Italian government,” it could “bring down the whole euro system.”
“That is why Merkel and Sarkozy will do anything they can to persuade whoever is running Greece to take things slowly, to follow the medicine, to carry on pretending they can pay the debt when everyone knows they can’t,” Grant said, referring to Chancellor Angela Merkel of Germany and President Nicolas Sarkozy of France.
The proposal for talks to form a unity government followed a roller-coaster week of intense brinkmanship. Papandreou proposed a referendum on Greece’s new debt deal with the EU – roiling world markets and spooking Europe – before coercing the opposition to back the deal and just as quickly calling off the referendum plan.
But as the dust settled Saturday, it was still unclear whether Papandreou’s referendum gamble was a brilliant strategy to hasten passage of the debt deal, which is Europe’s best hope to create a firewall around Greece, or whether it achieved a short-term political gain while dooming the government’s ability to work with opponents to approve the agreement.
The deal dictates the approval of a series of austerity measures the government has already agreed to and imposes a permanent foreign monitoring presence. Amid growing social unrest, the Socialist government might not have the ability to pass the necessary legislation on its own, hence Papandreou’s appeal for broader consensus.
What was clear on Saturday was that Papandreou was still attempting to steer the country to its next phase, even as his political capital appeared to have just about run out. Although he reiterated that he was willing to step down if necessary to achieve a coalition government, he stopped short of doing so.
Papandreou said the new unity government’s chief goal would be to approve the legislation required by the new debt deal, hammered out in Brussels on Oct. 26. Approval will release the next installment of $11 million in foreign aid Greece needs to pay expenses and prevent a default.

“The approval of the legislation is a prerequisite for us to remain in the eurozone,” Papandreou said. “The situation is that critical.”

The prime minister also reiterated his opposition to early elections that might cause political chaos and jeopardize Greece’s foreign aid. He said failure to achieve broader political consensus “could raise concerns among our foreign partners about our intentions, about our will to remain in the hard core of the European Union and the eurozone.”

The attempts to form such a consensus on Saturday afternoon appeared to be held hostage by a bitter rivalry between Papandreou and Antonis Samaras, the leader of the New Democracy party and the prime minister’s college roommate.

In calling for early elections, Samaras said in a televised news conference, “We didn’t ask for a position in this new government; all we asked for is the resignation of the prime minister.”

He was expected to meet with the Greek president Sunday afternoon. If the two sides fail to find the common ground for a joint government, the country is likely to go to early elections.

“The egotism of two people is essentially to blame for the current stalemate,” Giorgos Kassimatis, a professor of constitutional law at Athens University, told Skai television. “Why is Papandreou delaying his resignation?”

Samaras said Saturday that he still backed the European debt deal, including the tough fiscal deficit targets set by Greece’s creditors. But he then added a note of confusion, saying that he thought some government policies to meet those targets would need to change. He did not elaborate, but in the past he has spoken against high taxation.

Papandreou met on Saturday with Finance Minister Evangelos Venizelos, who is widely seen as a likely candidate to guide a possible coalition government, but there were no immediate reports from the meeting.

Venizelos is scheduled to attend a meeting of EU finance ministers in Brussels on Monday.

News reports on Saturday said that Venizelos – who in recent months is seen to have upstaged Papandreou as Greece’s main interlocutor with its creditors – was contacting the leaders of other smaller political parties in an effort to form a government that he would lead.