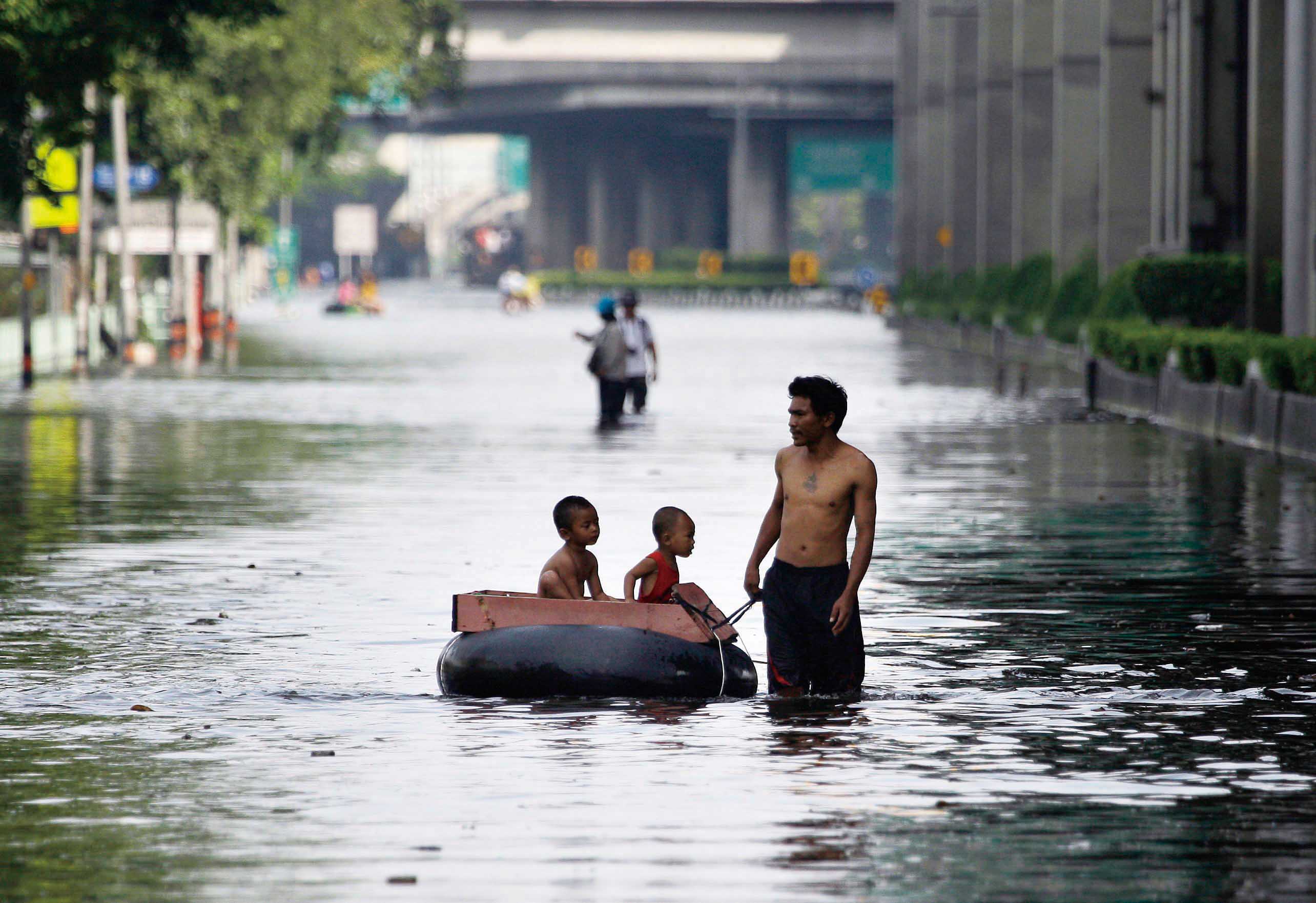 The nationwide death toll from flooding in Thailand climbed past 500 on Sunday, as the polluted black water continued its march through northern Bangkok, pouring across major intersections and a road underneath the capital’s elevated train line.
Floodwaters were also approaching a main road near the city’s Mo Chit bus terminal, a major gateway to northern Thailand. But the bus station remained open, traffic police chief Uthaiwan Kaewsa-ard said.
Three months of intense rainfall have fueled Thailand’s worst flooding in half a century, swamping much of the country since July and leaving 506 people dead, according to the government. Floodwaters have begun receding in some provinces north of Bangkok, but they have built up around the city, which stands in the way of the water’s natural flow south toward the Gulf of Thailand.
So far, authorities have ordered evacuations in eight of Bangkok’s 50 districts, while seven others are either heavily or partially flooded.
On Saturday, floodwaters began lapping at Bangkok’s largest outdoor shopping zone, the famed Chatuchak Weekend Market, a major tourist attraction north of the city’s central business district. Water was flowing past the market’s eastern side.
In the last few days, it has also begun moving southward in adjacent Lad Phrao, a district studded with office towers, condominiums and a popular shopping mall.
Since late Saturday, water had also inundated a two-lane road underneath the Mo Chit Skytrain station, an elevated train platform that is part of one of the city’s mass transit systems. The road was still passable. Subway service has not yet been affected.
Hoping to divert some of the mass of water still piled up in northern Bangkok, workers Friday night completed a 3.7-mile (6-kilometer) flood wall made from massive, hastily assembled sandbags. But Bangkok will have to rely on its existing drainage system to fight water that was already beyond the wall and just a few miles (kilometers) from the central business district, city spokesman Jate Sopitpongstorn said.
Over the past two decades, the city’s much enlarged and improved drainage system has been able to effectively siphon off water during monsoon seasons with average rainfall. But it will be put to a severe test given the volume of water not seen in Bangkok since perhaps a great flood in 1942.
Sound predictions are difficult because various government officials, including Bangkok’s governor and Thailand’s prime minister, have given often widely different versions of what city residents can expect.

On Saturday, Prime Minister Yingluck Shinawatra told a radio audience that a plan to be put before the Cabinet on Tuesday would allocate 100 billion baht ($3.3 billion) for post-flood reconstruction.

“I admit that this task has really exhausted me, but I will never give up. I just need the public to understand,” Yingluck said.

While some roads out of the capital are still passable in every direction, the two major safe corridors from the city run to the south and the east, where Bangkok’s international airport is located. Officials maintain they are confident that Suvarnabhumi Airport — the city’s only aerial gateway to the outside world — will remain open. Bangkok’s second airport, used for domestic flights, is already underwater and remains closed.