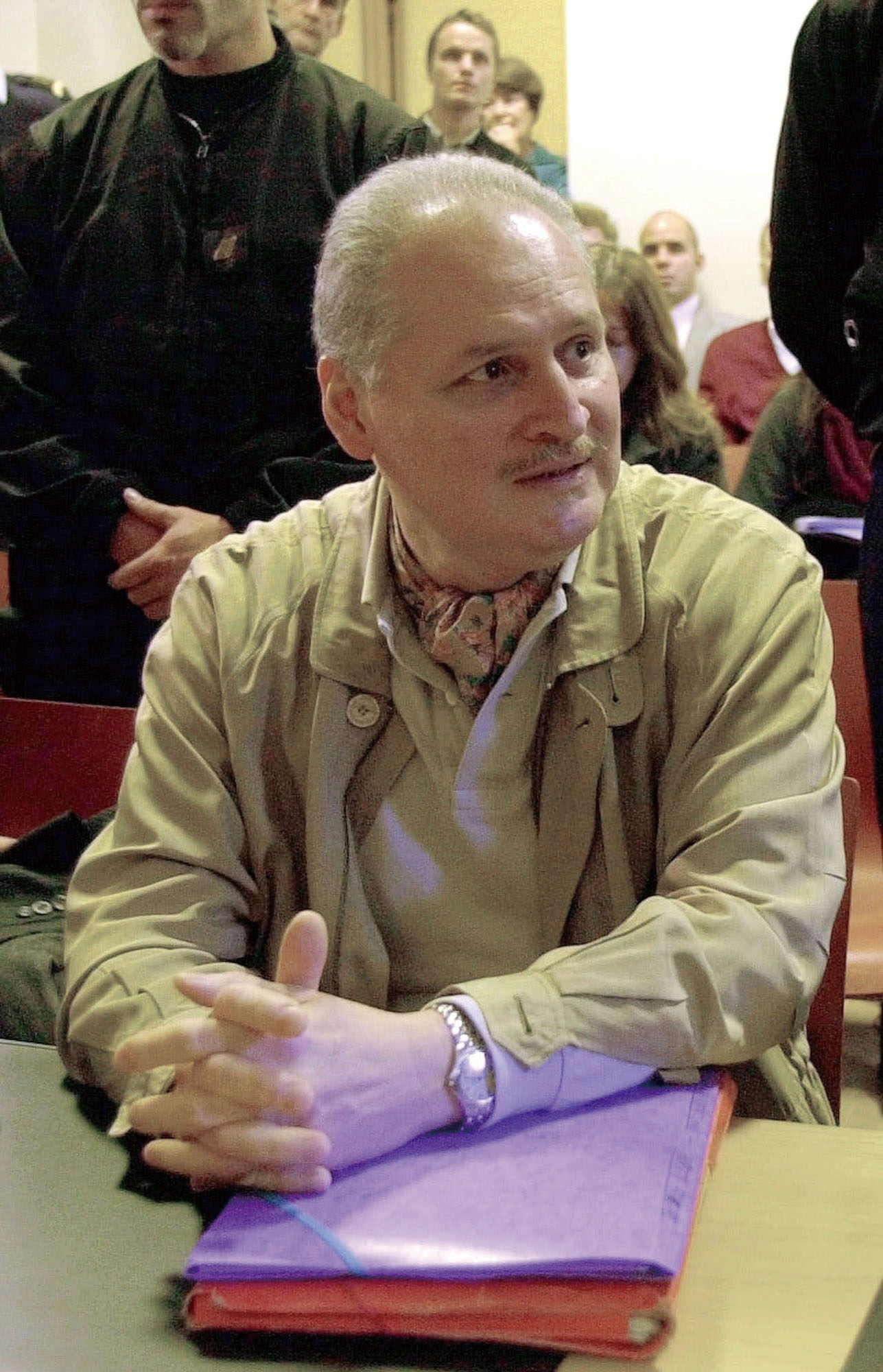 Once among the world’s most feared masterminds of terror, the man known as Carlos the Jackal is now a graying convict who has been behind bars for 17 years. On Monday, he goes on trial for four deadly attacks that occurred nearly three decades ago, and the verdict could determine his chances of ever being freed.
Defiant ahead of the proceedings before a special anti-terrorism court — expected to last six weeks — the 62-year-old whose real name is Ilich Ramirez Sanchez told a French radio in a clandestine interview that he has “a character adapted to this kind of combat.”
“I’m still in a combative state of mind.”
Still, Ramirez, suffering from Type 2 diabetes and apparently mellowing, misses the family life he said he sacrificed in his years globe-hopping as a freelance terrorist through Middle East and European capitals, then on the run and finally imprisoned in France in 1994.
He keeps dreaming that one day he can leave his French captors for his home country, Venezuela, whose president, Hugo Chavez, once praised him as a “revolutionary fighter” — and whose embassy in Paris reportedly supplied him until recently with Havana cigars.
“The first thing I’ll do if I get out by the grace of God ... I’ll start with my honeymoon. It’s more than a decade late,” he said in a telephone interview last month with Europe 1 radio.
His 2001 prison marriage in an Islamic ceremony with one of his lawyers, Isabelle Coutant-Peyre — his third wife — is classic Carlos, just like the unauthorized interview ahead of his trial that landed him in solitary confinement — ended only by a 10-day hunger strike.
Life’s little basics are wanting, he said.
“I can’t shave, I can’t cut my nails,” he complained.
Most of the world remembers another Carlos the Jackal, commanding and boastful, slipping from country to country at will and defying Western secret services. For the revolutionary movements that thrived in the 1970s, he became a living legend.
Ramirez is the chief suspect in the 1975 seizure of OPEC oil ministers, and received a heroic welcome when he landed with his hostages in Algeria, and in the 1976 Palestinian hijacking of a French jetliner to Entebbe, Uganda, which ended with an Israeli commando raid.
Doubt has been cast on his alleged role in the massacre of Israeli athletes at the 1972 Munich Olympics. But his links to hijackings, bombings and killings reflect the multiple causes Ramirez took on in mercenary style, from joining the Popular Front for the Liberation of Palestine to helping extreme-left European terror groups, protected all the while by the shadowy alliances that thrived during the Cold War.
Safe havens grew scarce and allies turned dubious once the world was upended by the fall of Communism in 1989. French secret agents snatched him from his refuge in Khartoum, Sudan, on Aug. 14, 1994, and spirited him to Paris in a sack.
Even in custody, he cultivated the image of an intrepid warrior, filing a legal complaint against then-Interior Minister Charles Pasqua for kidnapping.

“I’m a professional revolutionary. The world is my domain,” he said at his 1997 trial during which he faced a Paris criminal court — unbowed and raising his left fist after being sentenced to life in prison. Under French law, he must serve 30 years.

The Carlos of then was convicted of killing at close range two unarmed French investigators and an alleged Lebanese informant, a friend he feared was a turncoat.

Now, a new moment of truth awaits Ramirez, this time in a special court devoted to terrorism cases overseen by a panel of anonymous magistrates. He is charged in connection with four deadly bombings in France, in 1982 and 1983, that killed 11 people and injured 140.

To make its case, the prosecution dug deep into secret service archives of former Communist countries where Carlos found safe haven during the Cold War, notably East Germany and Hungary.

His lawyers have rejected the archival evidence as “photocopies of photocopies.”

While Carlos once claimed responsibility for killing 83 people, he denies any role in the four attacks.

Prosecutors say he allegedly had a deeply personal motive in the two 1982 attacks, trying to force the French to free his jailed girlfriend, Magdalena Kopp — with whom he later married and had a daughter — and comrade-in-arms, Bruno Breguet.

Six people died in those attacks, on a Toulouse-Paris train and in front of the Paris offices of an Arab-language newspaper.

A group calling itself the Organization for the Arab Armed Struggle claimed responsibility for two New Year’s Eve attacks in 1983, one on a Marseille train station that killed two people and another on a fast train in eastern France that killed three.

Crack police teams will be on the watch Monday as a convoy delivers Ramirez from the high-walled La Sante prison in southern Paris to the Justice Palace in the city center.

In court, one can expect to see a dapper if aging man, possibly wearing one of the silk ascots of which he’s fond. If true to form, Ramirez, who vaunts his intellectual prowess, will seek opportunities to interject lengthy tirades with revolutionary fervor in his Spanish-accented French.

The question is whether the old panache will fail him after his hunger strike on Oct. 18-27, or whether materials his lawyers say he was denied at one point to prepare for his trial, including two DVDS containing 100,000 pages, will be used in the courtroom to disrupt or seek delays.

Defense lawyer Francis Vuillemin said in a letter to French Justice Minister Michel Mercier that the goal of placing his client in isolation was “to break (his) psyche before his trial, to disorient and weaken him.”

Carlos’ life as a die-hard revolutionary perhaps began with his name.

He got his nom de guerre after British tabloids learned that a copy of Frederick Forsyth’s 1971 thriller, “Day of the Jackal,” was found in one of his early London safehouses. The novel tells the story of a professional killer hired to assassinate French President Charles de Gaulle.

Supporters in a dwindling fan club include Venezuela’s Communist Party and his younger brother Vladimir Ramirez, who led about a dozen protesters last week in Caracas, bearing signs reading “Freedom for Carlos.”

He called the trial “one more stage in the French government’s extreme cruelty against Ilich and the illegalities that government has committed.”

“There’s been a perverse campaign on the part of the French government to try and convict Ilich even before the trial,” Vladimir Ramirez told The Associated Press.

Venezuelan Foreign Minister Nicola Maduro said on state TV in September that his government is providing support to Ramirez because of the “very difficult circumstances in France.” He did not detail the assistance. The latest issue of the newsweekly Le Nouvel Observateur quotes Ramirez as saying that contacts with the embassy in Paris had dropped off. He was no longer receiving money, or Havana cigars.

But Ramirez acknowledged to Europe 1 that, once hunted the world over, “It’s a miracle I’m still alive.”