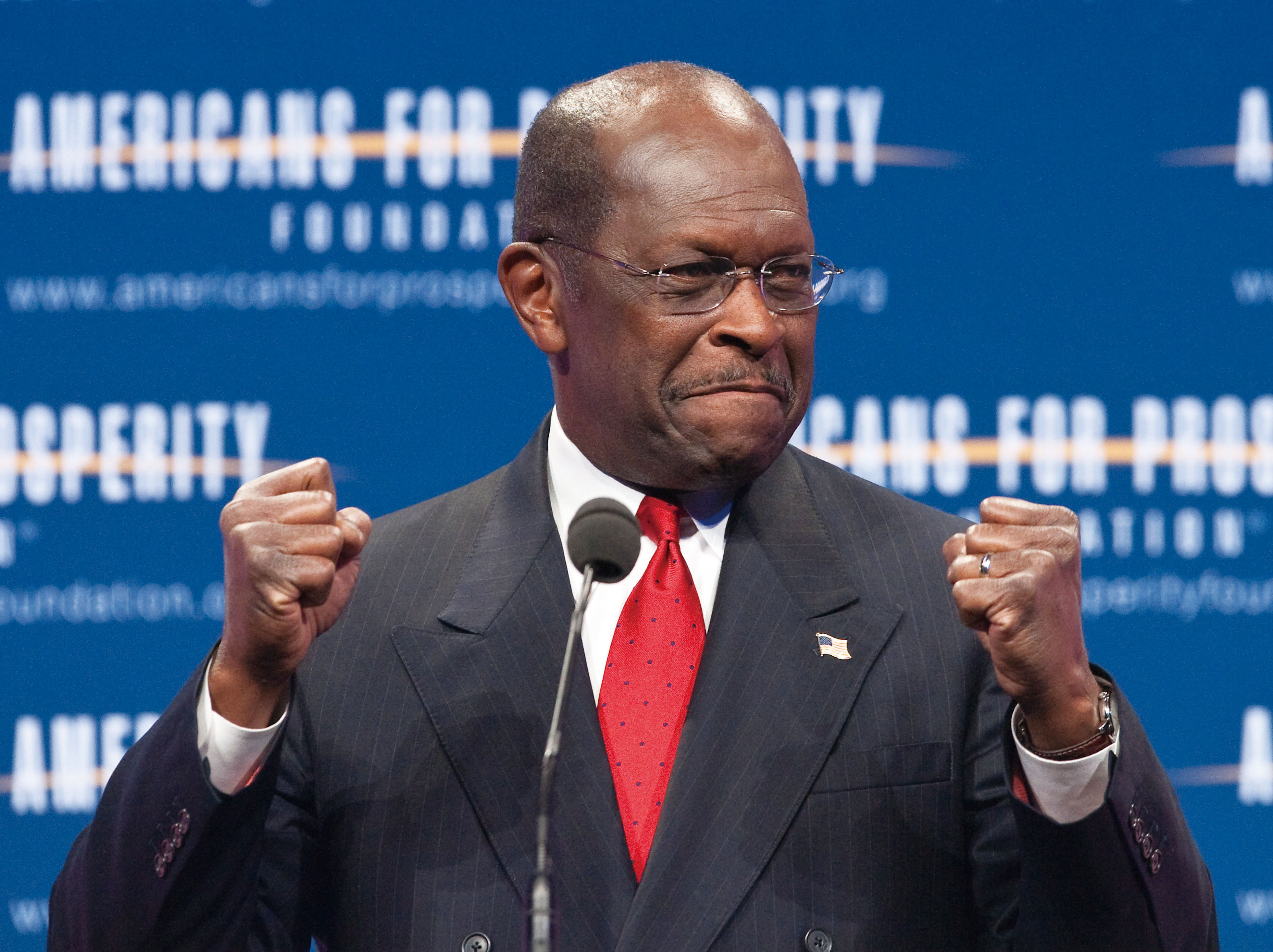 A lawyer for a woman who accused Republican presidential candidate Herman Cain of sexual harassment said today that she complained about a “series of inappropriate behaviors” and “unwanted advances.”
Joel Bennett, in a statement to reporters, said his client stands by the “good-faith” complaint she made against Cain when he was head of the National Restaurant Association in the late 1990s.
Cain, 65, has called the allegations “baseless” and has tried to move forward with his campaign after spending the last week defending himself from the allegations.
“We look forward to focusing our attention on the real issues impacting this country -- like fixing this broken economy,” said Cain spokesman J.D. Gordon, in a statement.
Two women who had worked at the restaurant association accused Cain, who was CEO of the organization at the time, of sexual harassment and were paid settlements for their claims.
Both women signed confidentiality agreements prohibiting them from discussing the details of the incidents. In a statement released late today, the restaurant association said Cain had disputed the allegations at the time they were made.

Former employees say the organization paid one female staffer a year’s salary -- $35,000 -- in severance after she complained about Cain’s behavior. The second woman, now a spokeswoman for a federal agency in Washington, received $45,000, according to a report yesterday by Politico.

Bennett told reporters that the woman he represents doesn’t want to divulge the amount of her settlement, her identity or the specifics of her complaint, including the settlement she received from the trade organization.

“She and her husband see no value in revisiting this matter now, nor in discussing the matter any further publicly or privately,” he told reporters. “In fact it would be extremely painful to do so.”

Cain’s personal life came under scrutiny as he became one of the leading candidates among Republicans seeking the 2012 presidential nomination, less than two months before the Iowa caucuses start the nomination process on Jan. 3.

He holds a virtual tie with former Massachusetts Governor Mitt Romney in a national survey of Republicans conducted this week. Romney found support among 24 percent of Republicans in the Washington Post-ABC News poll, compared with 23 percent for Cain. The poll, with a margin of error of 3.5 percentage points, was taken Oct. 31 through Nov. 3, after Politico reported allegations of two women who worked at the restaurant associaton when Cain was chief executive.

Today, Cain and Romney each addressed a Washington conference of Americans for Prosperity, a political advocacy group co-founded and financed by billionaire brothers David and Charles Koch, who control Koch Industries and have financed ads to help elect Republicans.

The New York Times reported today that Cain campaign manager Mark Block led the group’s chapter in Wisconsin and Cain was hired in 2005 to lead its “Prosperity Expansion Project.” Cain told his audience the Times made it sound as if he and the Koch brothers go fishing together.

Cain has continued to blame Texas Governor Rick Perry’s campaign for reviving the sexual harassment allegations, even after one of the businessman’s top aides said he accepted a Perry strategist’s denial.

“Let’s just say, there aren’t enough breadcrumbs that we can lay down that leads us anywhere else at this point,” Cain said yesterday when asked on Sean Hannity’s radio show if he thought Perry’s campaign peddled the allegations to reporters.

Perry, in an interview on CNN yesterday, said his campaign had nothing to do with the leak. If that wasn’t the case, he said, any employee involved would be “out the door.”

“It makes me sad with the finger-pointing,” she said. “That’s not the point of this race.”

The allegations about Cain’s behavior have grown since the story first broke in Politico on Oct. 30. A third woman told the Associated Press on Nov. 3 that she considered filing a complaint against Cain for what she considered aggressive behavior, including inviting her to his corporate apartment.

A Republican pollster who worked for the restaurant association said earlier this week that Cain had sexually harassed a low-level staffer, whom he described as about two years out of college, at a restaurant in Arlington, Virginia.

“Everybody was aware of it,” Chris Wilson, a principal of an Oklahoma-based political consulting firm that is working for a group supporting the Perry campaign, said in an interview with KTOK radio in Oklahoma City. “So many people were aware of her situation, the fact she left. Everybody knew with the campaign that this would eventually come up.”

Wilson declined to offer further details to Bloomberg News about the incident, though he did say he didn’t leak the story to the media.

Cain, in his Hannity interview, denied Wilson’s harassment claim. “For him to say stuff like that, there again, where’s the documentation?” Cain said. “Where’s the proof? They don’t have any.”

Cain has offered conflicting answers to questions about the allegations. In a speech at the National Press Club on Oct. 31, he said he was unaware of any financial settlement of sexual harassment claims against him. On Nov. 1, Cain told CNN that the association paid a woman “somewhere in the vicinity of three to six months’ pay” after she complained about him.

“I don’t pay women compliments, unless I know them well enough that they’re not going to take it the wrong way,” Cain said on the Hannity program. “I didn’t say that she looked hot or whatever this sort of thing.”