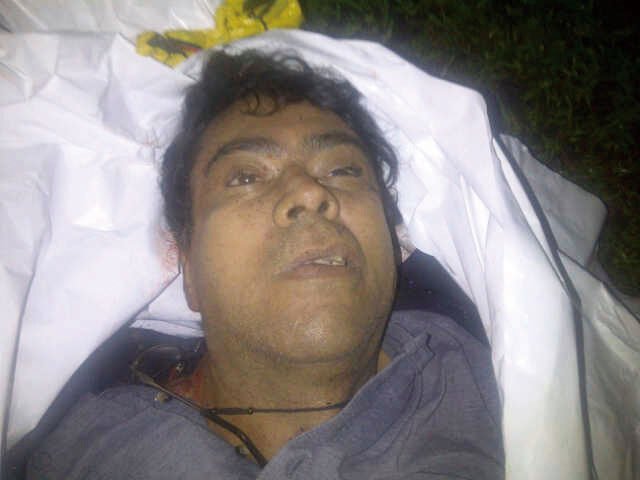 Colombia’s defense minister says FARC rebel leader Alfonso Cano was killed in combat with soldiers and police hours after his camp was bombed.
Defense Minister Juan Carlos Pinzon says the 63-year-old guerrilla commander known for his trademark beard was clean-shaven when he died in Friday’s firefight.
He says four other rebels were killed and five captured in the skirmish an hour before dusk.
Pinzon says Cano died not far away from the camp that was bombed. He says troops found seven computers and 39 thumb drives at Cano’s camp as well as a stash of cash in currencies including U.S. dollars, euros and Colombian pesos.
Colombian authorities released a photograph of the deceased rebel’s face. It does not appear disfigured.
The death was a major victory for President Juan Manuel Santos, coming just over a year after the military killed the rebels’ field marshal. It was anything but a fatal blow, however, to the nearly half-century-old peasant-based insurgency.
Cano was killed in “a standard military operation” in Cauca state in a bombing raid followed by an attack by ground troops, said one senior security official who confirmed the death.
The official, who said Cano was positively identified by his fingerprints, spoke on condition he not be further identified.
Former President Andres Pastrana, who knew Cano from failed 1998-2002 peace negotiations he held with the rebels, told The Associated Press that the death “has to make the FARC think it’s losing the war.”
Cano, the head of the Revolutionary Armed Forces of Colombia, or FARC, had been the top target of Colombian authorities since September 2010, when they killed the insurgency’s military chief, Jorge Briceno, in a bombing raid.

The FARC, which is mostly financed by drug trafficking, is comprised largely of peasants from backwater areas who have few other opportunities in a country where land ownership is highly concentrated in the hands of a few.

Pastrana’s peace commissioner during the failed peace talks, Victor Ricardo, said Cano’s death by no means signals the end of the rebels, who are believed to number about 9,000.

“This is a blow to the FARC’s morale,” Ricardo told the AP. “But by no means can people imagine that this can bring an end to the FARC.” The FARC has a disciplined military hierarchy and someone is always in line to advance, he said. Ricardo said the next leader could be the rebels known as Ivan Marquez or Timochenko. Both are members of the FARC secretariat.

Still, Cano’s death was the latest in a series of withering blows to the rebel leadership that began in March 2008, when the FARC’s foreign minister, Raul Reyes, was killed in a bombing raid on a rebel camp across the border in Ecuador.

That same month, the FARC’s revered co-founder, Manuel Marulanda, died in a mountain hideout of a heart attack. He was believed to be 78.

That all happened when Santos, now president, was defense minister under Alvaro Uribe. The two built military success on billions of dollars of U.S. aid, including training and close intelligence-sharing.

Santos took office in August 2010 and was bouyed by the death of Briceno, who was better known by his nickname Mono Jojoy.

However, the FARC has in recent months been regrouping and rural violence has been on an uptick.

Among officials confirming the death was the governor of Cauca state, Alberto Gonzalez. His state has in recent months been a locus of stepped up FARC violence.

A second security official said Cano’s body was being taken to Popayan, the Cauca state capital. The official, also speaking on condition of anonymity, said Cano, whose real name was Guillermo Leon Saenz, was practically alone when he died in the attack in a rural area of the town of Suarez.

Santos had no immediate comment. A news conference was called for later at the Defense Ministry.

Ironically, Cano had in a New Year’s message praised the president for an initiative that later became enacted as law to redress and return stolen land to some 4 million victims of Colombia’s long-running conflict.

Most of those had been victims of far-right militias known as paramilitaries that have fought against the FARC, which was formed in 1964.

Cano, who wore thick glasses and a beard, released a number of video messages after Santos took office in which he urged the president to engage in dialogue with the rebels.

But Santos insisted that Cano needed make a peace gesture, such as halting all kidnappings. The FARC has not done that, and its fighters were blamed for two attacks last month that killed more than 20 soldiers.