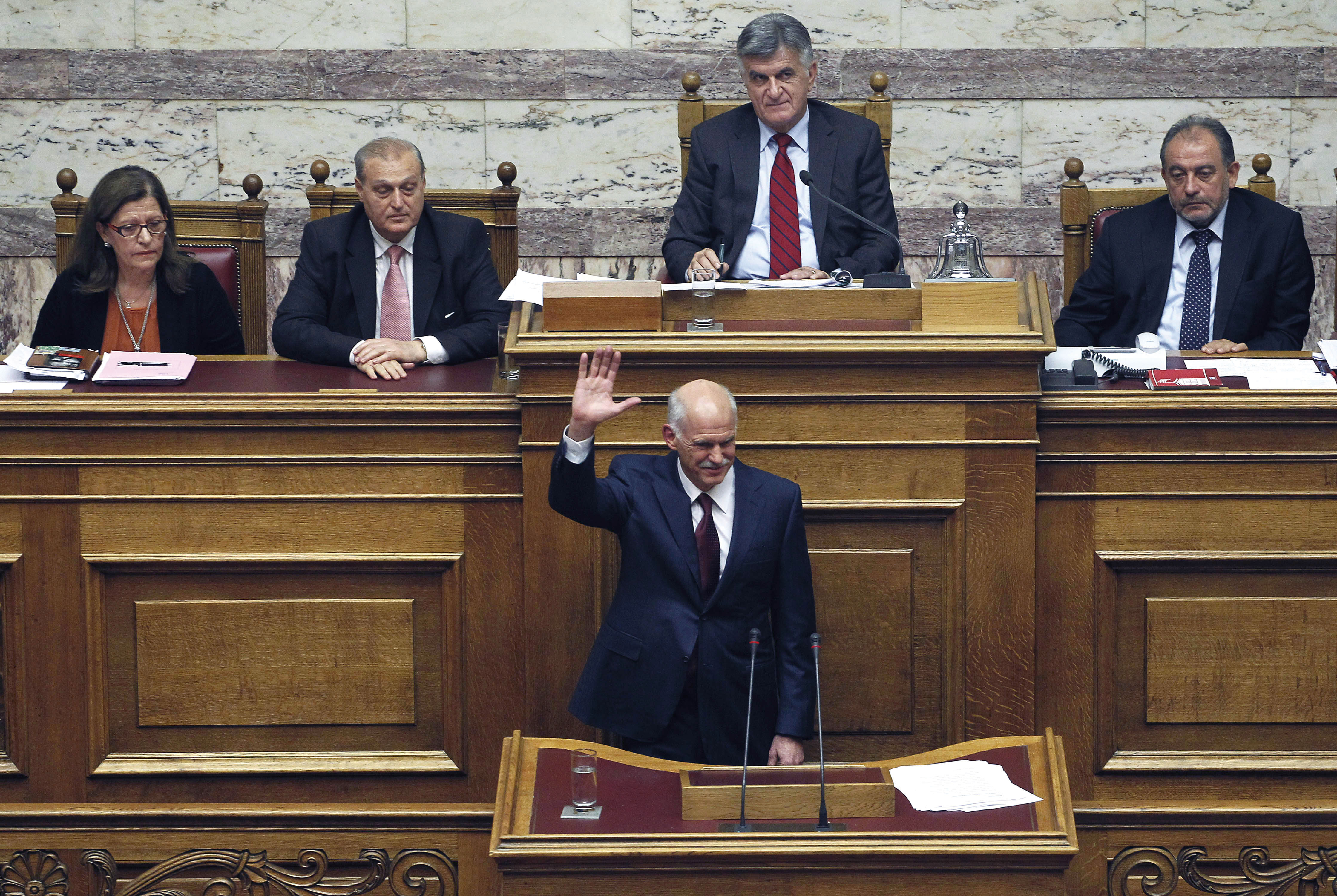 Greek Prime Minister George Papandreou survived a confidence vote early Saturday, calming a vicious revolt in his Socialist party with an emotional pledge to step aside if necessary and seek a cross-party government lasting four months to safeguard a new European debt agreement.
Papandreou won the critical parliamentary confidence motion 153-145 after a week of drama in Athens that horrified Greece’s European partners, spooked global markets and overshadowed the Group of 20 summit in the French resort of Cannes.
The threat of a Greek default or exit from the common euro currency has worsened the continent’s debt crisis, which is already struggling under bailouts for Greece, Ireland and Portugal.
Finance Minister Evangelos Venizelos, who warned that the debt-ridden country still faced “mortal danger,” said the new government would last until the end of February.
But conservative opposition leader Antonis Samaras demanded immediate elections. He did not say whether he would join coalition talks, due to be formally launched later Saturday when Papandreou meets the country’s president.
“The masks have fallen,” Samaras said. “Mr. Papandreou has rejected our proposals in their entirety. The responsibility he bears is huge. The only solution is elections.”
Midway through its four-year term, Papandreou’s government came under threat after his disastrous bid this week to hold a referendum on a major new European debt agreement. The idea was swiftly scrapped Thursday after an angry response from markets and European leaders who said any popular vote in Greece would determine whether the country would keep its cherished euro membership.
They also vowed to withhold a critical euro8 billion installment of loans from an existing bailout deal that Greece needs urgently to stave off an imminent and catastrophic default.
Papandreou’s shock referendum gamble, and the hostile international response, horrified many of his own party stalwarts. It prompted an open rebellion with senior socialists saying they would only back the confidence vote if he pledged to seek a cross-party coalition with a mandate to secure the new debt deal and the disbursement next bailout loan installment.
Struggling to face down the revolt, Papandreou insisted his only priority was to save the country. He insisted he was not concerned with retaining the premiership, but warned that elections now would have been “catastrophic,” jeopardizing Greece’s continued bailout funding, the new debt deal and the country’s euro membership.
He sought the vote of confidence “to safeguard a steady course for the country — with no power vacuum, without being dragged to election,” he said.
“We must proceed in an organized way. And regardless of developments, the country must be governed tomorrow without turbulence.”
Several thousands supporters of Greece’s Communist Party protested outside parliament just ahead of Friday’s vote to demand elections, in a rally that ended peacefully.
Government officials said they were not deterred by an initial hostile response by opposition parties to the coalition offer.
“We will keep inviting (Samaras), and re-inviting him, again and again until we have a result,” Agriculture Minister Costas Skandalidis said.
After seeing nearly two years of harsh austerity measures that spurred crippling strikes, violent demonstrations and street attacks against his lawmakers, Papandreou insisted the burden of painful reform could not be carried without help from opposition parties.
“We, the Socialist party deputies, carried the cross of reform ... But one group in Parliament is not enough,” he said. “This great task requires sincere and broad support.”

Greece has been surviving since May 2010 on a first euro110 billion bailout. But its financial crisis was so severe that a second rescue was needed as the country remained locked out of international bond markets by sky-high interest rates and facing an unsustainable national debt increase.

The new European deal, agreed on Oct. 27 after marathon negotiations, would give Greece an additional euro130 billion ($179 billion) in rescue loans and bank support. It would also see banks write off 50 percent of Greek debt, worth some euro100 billion ($138 billion). The goal is to reduce Greece’s debts to the point where the country is able to handle its finances without relying on constant bailouts.

In return for bailout money, Greece was forced to embark on a punishing program of tax hikes and cuts in pensions and salaries that sent Papandreou’s popularity plummeting and his majority in parliament whittled down from a comfortable 10 seats to just two.