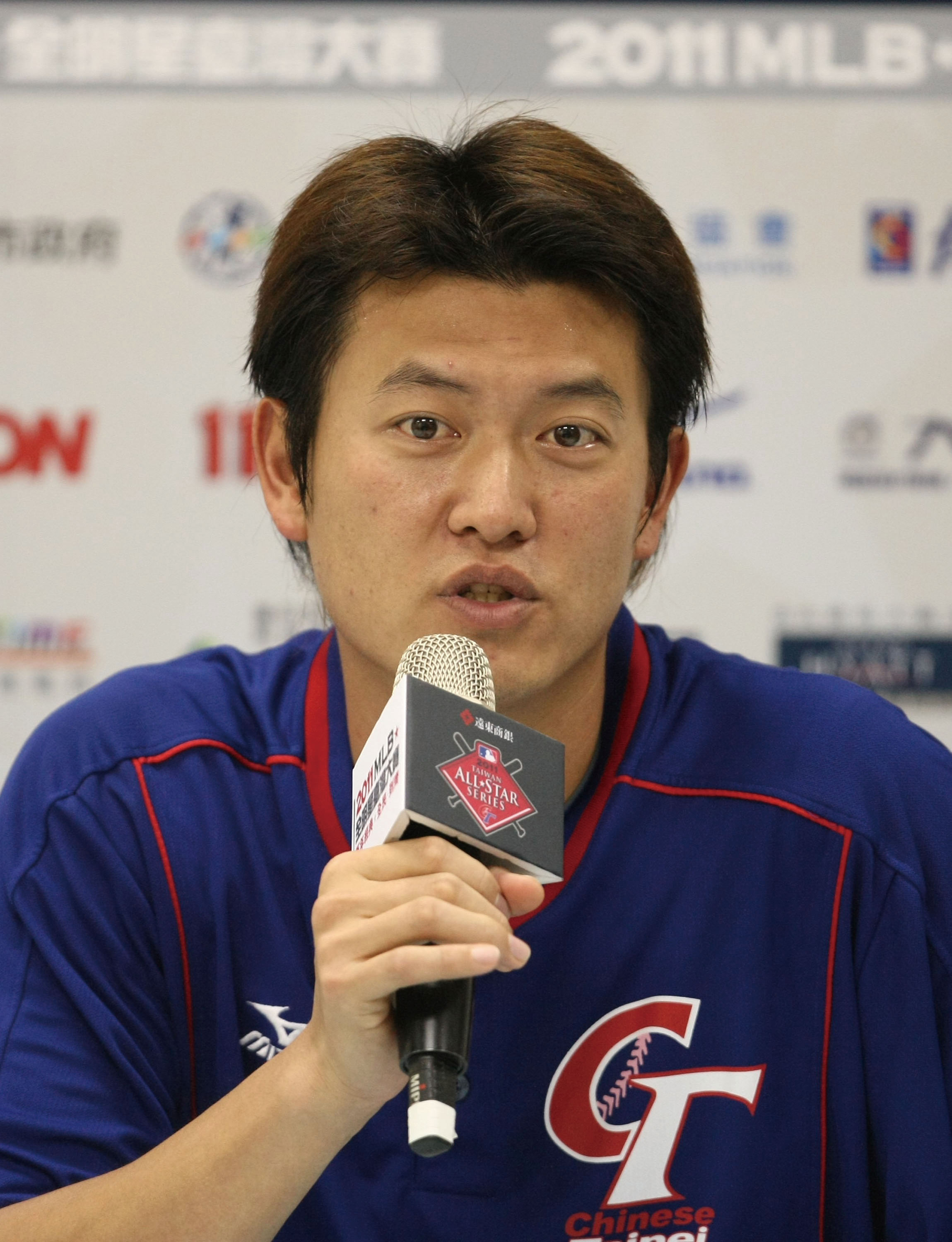 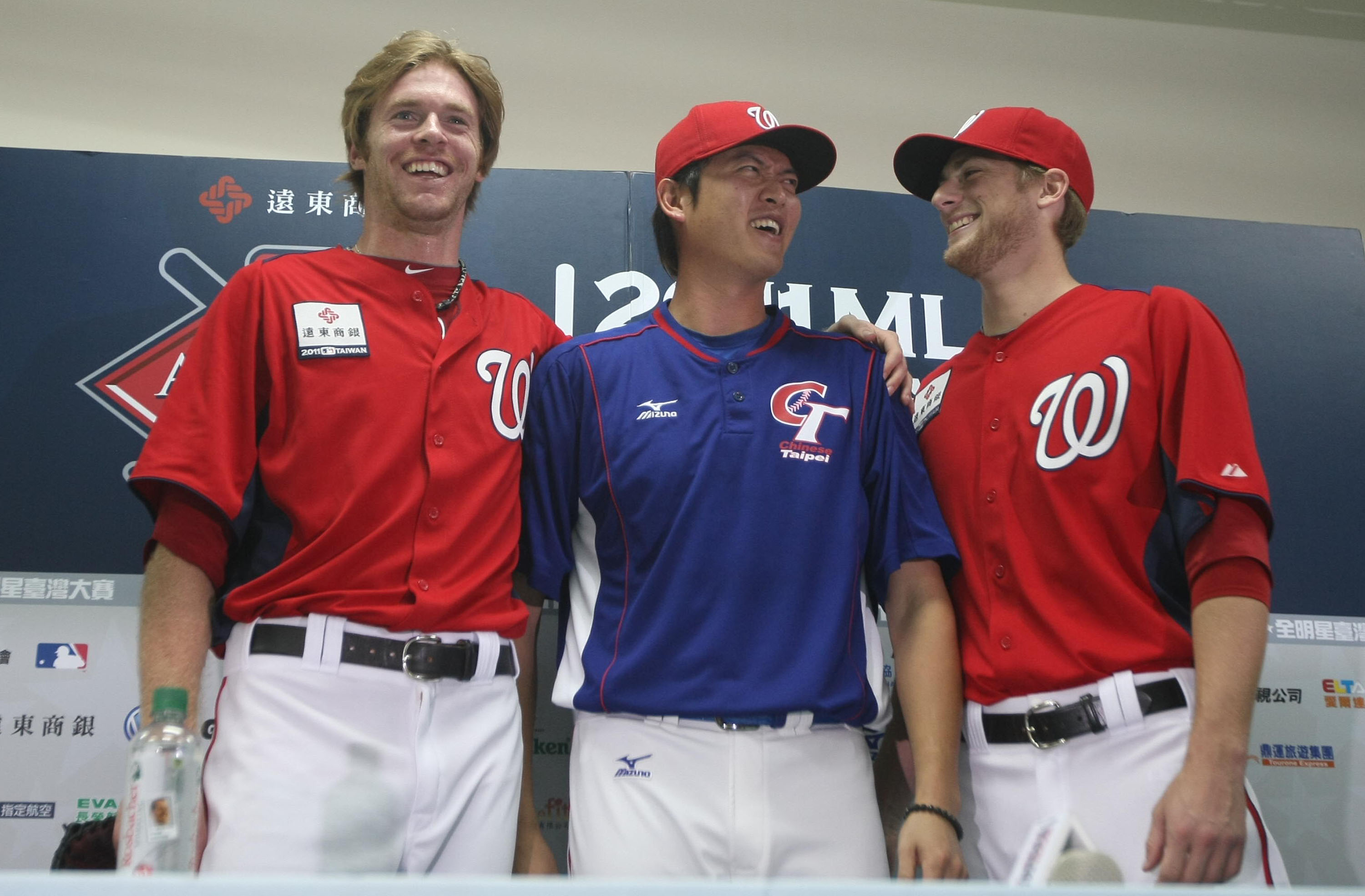 Taiwanese pitcher Chien-Ming Wang said Saturday he was very happy and satisfied with his new one-year contract with the Washington Nationals.
“I feel very happy and very grateful that the Nats helped me with rehab for two years,” Wang said at a press conference in Kaohsiung. He is currently in Taiwan to play for the Taiwan national team in a five-game exhibition series against a Major League Baseball (MLB) team of stars.
“I am very satisfied (with the contract). It is not easy to go back to the baseball field...I would like to make some contribution to the team,” the 31-year-old said.
The deal, pending a physical, is worth US$4 million plus performance bonuses, according to media reports. But Wang declined to give details of the contract.
For Wang, the new contract represents another milestone in his recovery from a serious shoulder injury and major surgery that derailed his career with the New York Yankees in 2009.
The Nationals signed Wang to one-year contracts in 2010 and 2011, supporting him during his rehabilitation. The team paid him US$2 million in 2010, when he did not throw a pitch.
Wang did not return to the majors until late July this season, which has been a productive one for him. He recorded 4-3 with a 4.04 ERA in 11 starts. He went 4-1 with a 3.71 ERA in his final nine starts last season.
The right-hander made US$1 million in base salary and earned roughly another US$2.5 million in incentives in the 2011 season, according to the Washington Post.
“I will do my utmost, competing in the field in good conditions and enjoying every pitch,” Wang said at the Taiwan press conference.
At the end of the press conference, Wang’s teammates Collin Balester and Ross Detwiler showed up to welcome him.
“It’s gonna be good and an honor, and I think it’s gonna help our team win,” Balester said.
“He’s gonna be one of the best pitchers year in year out,” left-handed Detwiler said. “It’s just an honor to be working with him and to learn from him.”
Wang is expected to start the fifth and final game of the all-star series on Sunday.
Wang turns down team option in new Nationals deal
Chien-ming Wang refused to add a team option to the new one-year, US$4 million contract he signed with the Washington Nationals on Friday.
Nationals General Manager Mike Rizzo said he hoped to add a team option to Wang’s contract but during negotiations Wang and his agent Alan Nero declined and settled for a deal that would make Wang a free agent in 2012, according to a Washington Post report.
A team option would give the Nationals the right to invoke a one year option. “That was a big part of the negotiation,” the report cited Rizzo saying.
The Nationals wanted a team option in the contract because if Wang performs well in the club, he could still return to the market as a free agent, but Wang and Nero turned down the option for that exact reason, the report said, citing Rizzo.
“At this price point that we signed Chien-Ming, a one-year deal is what Chien-Ming wanted,” said Rizzo. “He wants to prove that he is a healthy pitcher, get back on the market and become a free agent as a healthy starter with a full healthy season under his belt.”
A mutual option proposed by the Nationals was also turned down, as both sides thought it did not make sense, the report said.
Rizzo expects that after the 2012 season, the team would still have the “first right of refusal and have the best chance of signing him,” according to the report.
Wang made a successful comeback in late July 2011, after a shoulder injury put the pitcher out of the majors in July 2009.
The pitcher went 4-3 with a 4.04 ERA in 11 starts, and next season will likely become the Nationals third starting pitcher in rotation, behind Stephen Strasburg and Jordan Zimmermann, according to a Nationals press release.
Starting in 2012, Wang will no longer be restricted to the number of pitches or innings as he was in 2011 during minor league rehab and the majors, the team said.
Rizzo predicted in the press release that Wang should be 100 percent in full form by spring training and ready to go.
Wang thanked the Nationals for sticking by his side throughout the long recovery process.
“I am appreciative of the opportunity and all the support the Nationals gave me to make the comeback,” Wang said in a statement. “I am excited about next season, playing together with my teammates, and look forward to doing my best to help the Nationals to the playoffs.”