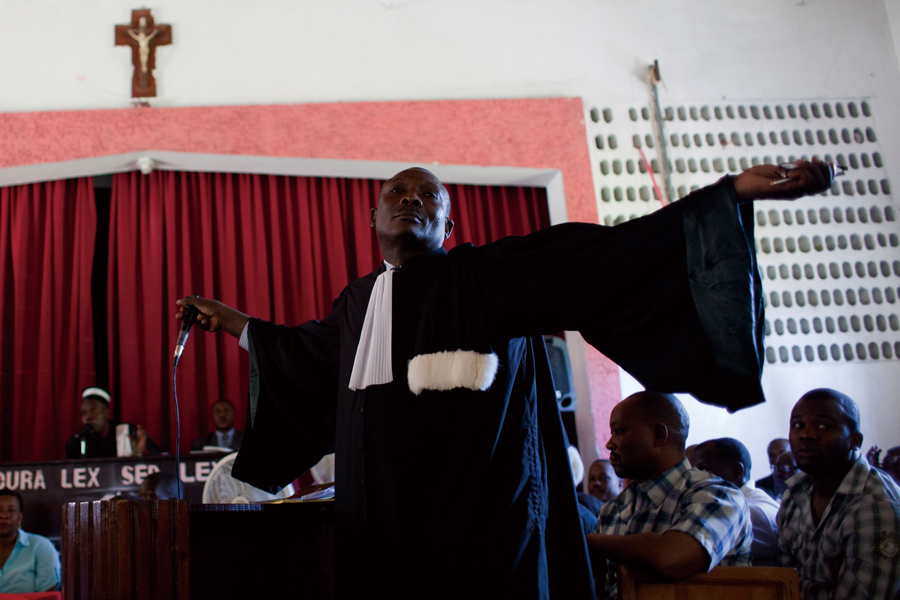 It is a legal spectacle unlike anything Haiti has seen: the government trying 13 of its own police officers – including high-ranking prison officials and riot squad members – on charges of murder, attempted murder or other crimes stemming from a prison massacre here last year.
Now in its third week, this intense drama is unfolding in a public theater at the center of town where hundreds of local residents wedge themselves into every corner and crevice as they watch in suffocating heat what the new government trumpets as the blossoming of Haiti’s rule of law.
By American legal standards, the trial in this provincial seaside city is more than a little bizarre: Small bottles of Roi des Coqs rum are sold inside the doorway; defense lawyers shout insults at the judge, claiming the trial is fixed; observers cheer as if they were at a soccer game, while some witnesses testify in semidarkness because the building has no lights.
Yet for all its quirks, the trial of these police officers – 21 more have been charged but are not yet in custody – is remarkable given Haiti’s history of ruthless dictators, corrupt courts and unpunished crimes. Three inmates testified Thursday against the same police force that was guarding them in the prison in Les Cayes, accusing the defendants of indiscriminate executions and beatings.
One prosecution witness, Patrick Olcine, told the judge last week that he had been shot in the back but had never gone to the hospital.
Asked why, Olcine replied: “They were taking dead people and living people, and they were picking them up together. I didn’t want them to pick me up and go bury me.”
More than 20 detainees died and at least 15 were wounded, said Jean-Marie J. Salomon, the lead prosecutor in the case.
Josue Pierre-Louis, Haiti’s new justice minister, showed his support by visiting the trial late last week. “Haiti has a reputation for impunity,” he said. “This trial is a valuable opportunity to show justice is working, to show that no one is above the law,”
The massacre took place amid the chaos after Haiti’s devastating earthquake on Jan. 12, 2010, and the government largely accepted the explanation of prison officials that a single detainee had fatally shot the inmates during a disturbance at the prison.
But an investigation by The New York Times in May 2010 contradicted that account. It found that the officers had shot unarmed prisoners, then sought to cover it up, in part by burying bodies in unmarked graves.
As a result, an independent commission, financed by the Haitian government and the United Nations, investigated and concluded that Haitian officers had opened fire “deliberately and without justification.” The report included accusations of hidden bodies, rearranged cadavers and wounded prisoners left dying in their cells.
The exact number of dead detainees is not known.
The accused include the warden of the prison, Sylvestre Larack, and the leader of the riot police, Olritch Beaubrun. Larack, who was later promoted to run the national penitentiary in Port-au-Prince, is among those on trial in Les Cayes, several hours by car from the capital. Beaubrun is believed to have fled to Canada.
Human rights observers worry that reaching a fair verdict could be difficult because of limited funds for the prosecution and an ever-present atmosphere of intimidation and threats.
Given the problem of seating a jury in Haiti, the case will be decided by the judge. But keeping control of the proceedings has not been easy.

Salomon, the prosecutor, said he and many of his witnesses had been threatened. “I’m a strong boy,” he said last week. “I’m going to do my job.”
Later that same day, while the accused were climbing into a police van, one of them threatened a Times reporter. “The people of Les Cayes will deal with you,” the officer said in Creole.
Earlier, defense lawyers clashed loudly with the judge, shouting objections as he futilely rang a small bell, which functions as a gavel. After a particularly heated exchange, the defense lawyers tore off their robes and left the court.
The judge suspended the proceedings, then told the accused that if their lawyers did not reappear the following morning, he would not resume the trial for six months and they would have to remain behind bars.
The next morning, the defense lawyers returned to the court on schedule.
The shootings, according to witnesses interviewed by The Times last year, can be traced to the aftermath of the earthquake, when worried detainees, most of them not convicted of crimes but awaiting trial, clamored to be released from the squalid prison.
The most vocal were beaten and stuffed into a cell that was already overcrowded, witnesses said. Bathroom privileges were taken away. A week later, when a guard opened a cell door so waste buckets could be removed, the occupants overwhelmed him, taking his keys and freeing the rest of the prisoners.
What happened next – the prosecutor compared it to a “horror film” – is what the trial is all about. Detainees say they were hit with tear gas and told to lie facedown on the ground. When they complied, the prisoners said, they were shot, either on the ground or in their cells.
The prosecution’s entire case is based on the testimony of prisoners, a point repeatedly underscored by the defense. One lawyer, Jean Eugene Pierre-Louis, told the judge that the government had “no ballistic reports, no death certificates, no autopsy, nothing like this.”
The prosecutor responded, “If we don’t have evidence for the bodies, that’s because it was made to disappear.”
Olcine, the prosecution witness, said that after police officers fired tear gas, they entered the yard shooting. “As soon as they would pass an open cell, they would shoot inside the open cell,” he said. He said he could not identify the officers who were shooting.
Olcine said he believed that as many as 36 prisoners had been killed or wounded, and he added: “I was counting the number of bodies that were taken out. I don’t know who was dead and who was alive, but I was counting the number they left with.”
The prosecution said in court papers that the police officers under the command of Beaubrun had ordered inmates to lie facedown, and then they opened fire.
The defense contends that detainees are lying to the court to get even with the police for putting them in prison. “We are looking to obtain the truth,” Fritz Petit, a defense lawyer, said in an interview. ``No one in my opinion can claim to know exactly what happened unless they have seen X killing Y.

Florence Elie, Haiti’s ombudsman, said she was concerned for the safety of prosecution witnesses. For that reason, Elie said that on Thursday morning she visited all the witnesses at the prison in Les Cayes. “I just spoke to all 20 of them,” she said. “All said that there have been threats.”
Elie said she also stayed in touch with the accused, who at one time had been kept in the national penitentiary, where other inmates had “almost killed them.” The defendants are now being held in a jail in Les Cayes apart from the witnesses.
Eleven years ago, dozens of former military and paramilitary officials were tried in Haiti for a massacre in Raboteau. That trial was considered a watershed moment for Haitian justice. But the convictions were subsequently overturned, and the legal system has remained weak.
The trial here, in which the government is prosecuting current officials, presents another potential turning point. William G. O’Neill, a human rights lawyer and an expert on Haiti, said: ‘`This case is like a testing of the waters to see if the rule of law is ready to grow. As the Creole saying goes, `Twig by twig the bird builds its nest.’