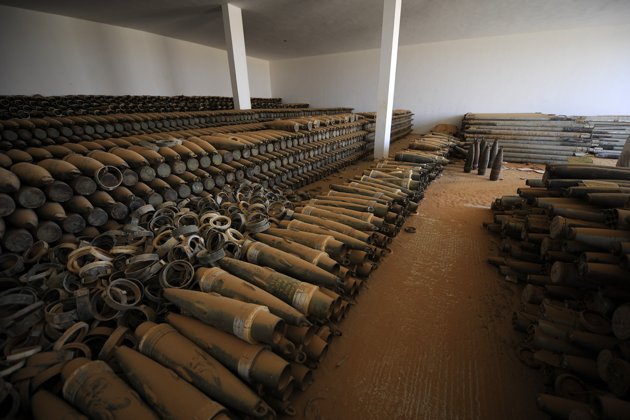 (AFP) Crumbling jet fighters and rusted tanks, commanded by yes-men rather than competent officers: this is the picture of a grandiose but decrepit war machine emerging after Libyan strongman Moamer Kadhafi's downfall.

Kadhafi dreamt of becoming the leader of a united Africa and spent billions of dollars building up the continent's biggest arsenal.

His huge spending spree, totally out of proportion with the needs of a nation with Libya's population, highlighted the "excesses and delusions of grandeur suffered by the Guide of the Revolution," Karim Bitar, of the French Institute of International and Strategic Studies (IFRIS), told AFP.

The army that Kadhafi inherited from King Idriss, when he overthrew the monarchy in a bloodless coup in 1969, was not insignificant -- Libya had been involved in a border conflict with Sudan and Chad from 1963.

But Libya's huge oil revenues allowed Kadhafi to shell out on supersonic warplanes, tanks by the thousands, missiles and astronomical quantities of munitions.

The materiel is stored in a still uncounted number of bases around the country, most of them dating from the early years.

One of those bases is in Hun, in the Jufra oasis, about 500 kilometres (300 miles) southeast of Tripoli. Soviet MiG 25s and Tupolev TU-22s, built in the 1960s, are rotting alongside French two-engine Transalls.

None of them take off any more. Their fuselages are crumbling, jet engines and propellers rusted, cockpit windows almost opaque from the effects of ultraviolet light.

"NATO didn't even bomb them; none of them have flown for years," laughs a fighter from the new regime guarding the base.

Nearby is a stockpile of Russian armoured vehicles, around 500 of them, which was attacked by NATO warplanes. Again, the ageing T55 tanks and BMP-1 troop carriers are mostly rusted, apparently not having moved in years.

After the euphoria of the 1970s, money began to grow tight. Then Libya was hit with a first set of international sanctions in 1982 over its interference in neighbouring countries.

A second set of of sanctions was imposed after Libya was blamed for the 1988 downing of a Pan Am jumbo jet over the Scottish town of Lockerbie, killing 259 people on the plane, mainly Americans, and 11 on the ground.

In late 2003, Kadhafi renounced all attempts to develop a non-conventional arsenal, paving the way for a lifting of sanctions. Despite that, the regime bought little new materiel -- some Russian T-90 tanks, and some Russian and French missiles.

Kadhafi had hundreds of thousands of tonnes of munitions, some of it obsolete but still dangerous, which should have been more than sufficient to fend off the initially amateurish and under-equipped rebels.

NATO's air strikes "levelled the playing field," he said, but that was not all.

Bitar pointed to the "mediocrity of the military hierarchy, with Kadhafi's paranoia leading him to push aside the most competent members of the officer corps and relying on cronies or even mercenaries ... without structure or ideology."

In Misrata, on the coast east of Tripoli, former army officer Bashir Elnari recounted what he called the "corruption and incompetence" of the military.

Elnari worked in a communications centre hidden in a massive nuclear bunker that was attacked by NATO.

"Years ago I alerted the general staff that the builder had cut corners on the cement" used in the bunker's construction. "No reaction.

"Every time it rained, water leaked in. Imagine that, rain in a nuclear bunker."