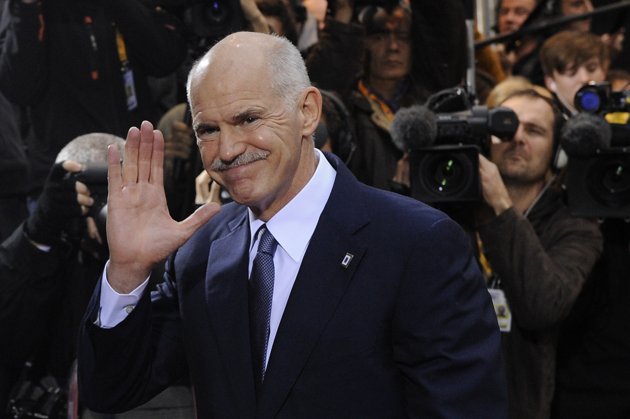 (AFP) Greece is to begin talks on Saturday on forming an emergency government to drag itself out of political stalemate caused by two years of austerity, after Prime Minister George Papandreou won a nail-biting confidence vote.

As the shadow of bankruptcy loomed over the crisis-hit nation, Papandreou won the parliamentary vote after pledging to initiate the talks to overcome a budding revolt from the party founded by his father nearly four decades ago.

He carried the vote, watched nervously by financial markets and fellow European leaders, by 153 deputies to 145 from the combined opposition.

Shortly before lawmakers began voting, Papandreou had announced he would see Greek President Carolos Papoulias later on Saturday to hand in his mandate and start talks on the formation of such a government.

The meeting would be held at 1000 GMT, the PM's office said.

"Papandreou gets vote of confidence and hands over the baton," leftist Eleftherotypia daily said in its online edition.

The ruling socialists went into the showdown with 152 deputies but added another before the night was over.

Former labour minister Louka Katseli, who had been ejected earlier this month for opposing a collective wage amendment included in a reform bill, was readmitted into the ruling parliamentary group after supporting the government.

Papandreou's lawmakers gave him a standing ovation as he entered the chamber and again at the end of his speech.

"Honest and broad backing is called for," he told deputies ahead of the vote. "It is time to cooperate with a sense of national responsibility," he said.

"I am not interested in a chair, the last thing I am interested in is whether I am re-elected," said the 59-year-old politician, who took over the party in 2004 and endured two national election defeats and a leadership challenge from current Finance Minister Evangelos Venizelos before coming to power in 2009.

"If by my deeds I can give a message that we are not enemies (with the opposition) ... then I will have made the greatest contribution to the country in my 30-year career," the PM said.

"The tradition of my family would not permit me to do anything different," said Papandreou, whose father and grandfather were also leaders of Greece.

The debate, held with several thousand communists staging a noisy protest in front of the flood-lit parliament, capped a tumultuous week for Greece.

It began with a disastrous call by Papandreou to hold a referendum on a 100-billion-euro ($137-billion) bailout package agreed with the EU last week, a move that sparked revolt in his own party and roiled financial markets.

EU leaders had warned that Greece would not get the next planned eight-billion euro ($11 billion) aid installment from the IMF and EU unless the deal went through, and threatened to boot Athens out of the Union if it defaults.

Without the EU-IMF funds, Greece would run out of money within weeks.

And for the first time, German Chancellor Angela Merkel and others had raised the spectre of Greece leaving the euro, hiking the pressure on the politicians in Athens to strike a deal if they wanted to remain in the bloc.

Early elections will be held once negotiations on the EU bailout package are complete, Finance Minister Venizelos told parliament.

He said the new government would be in power "until the end of February" when details on the EU bailout package are expected to be completed "so they can be submitted to the electoral inspection of the Greek people."

Stock markets had earlier closed lower as uncertainty grew over the outcome of the chaos in Athens, with Greece's stock market down 1.17 percent.