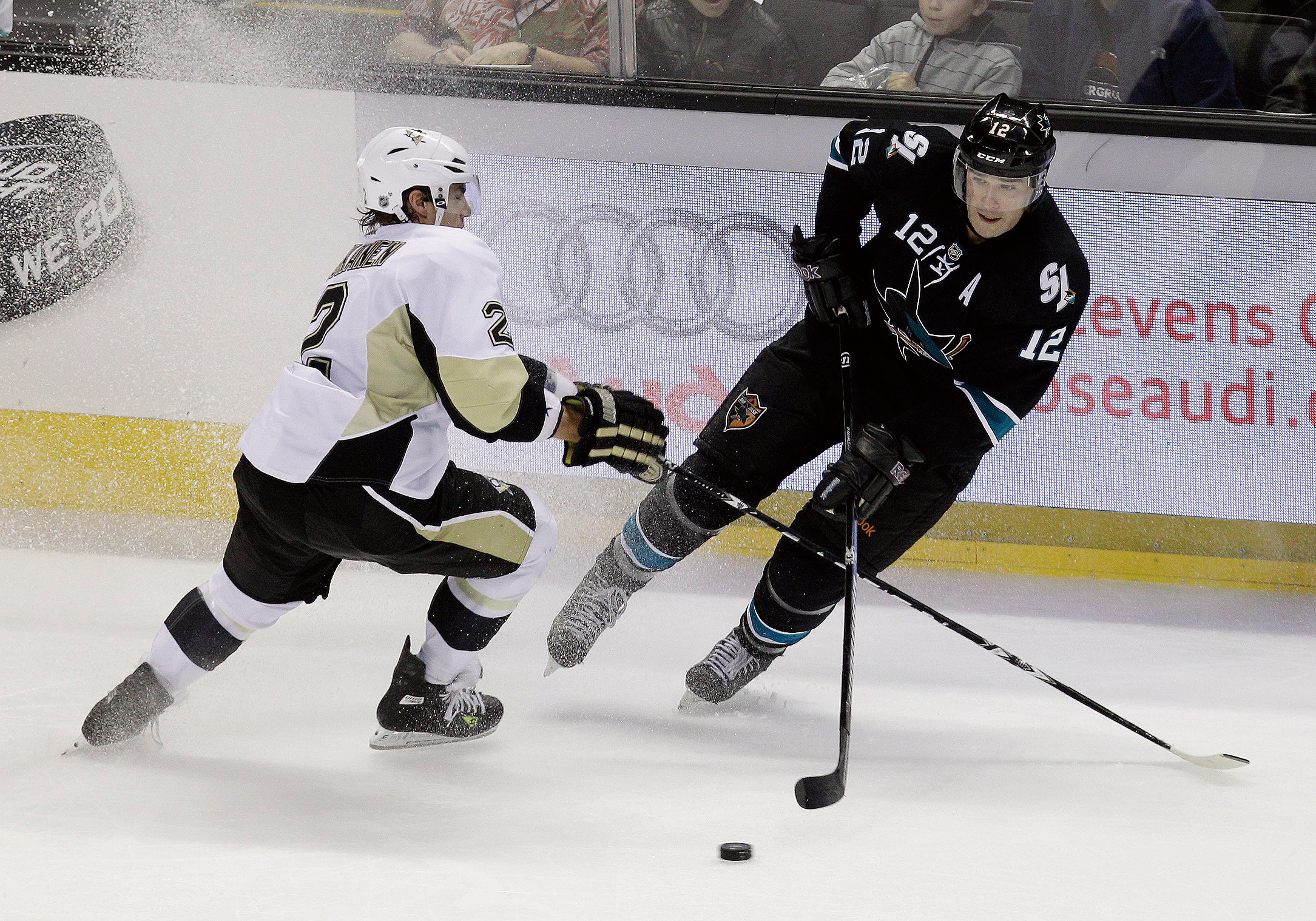 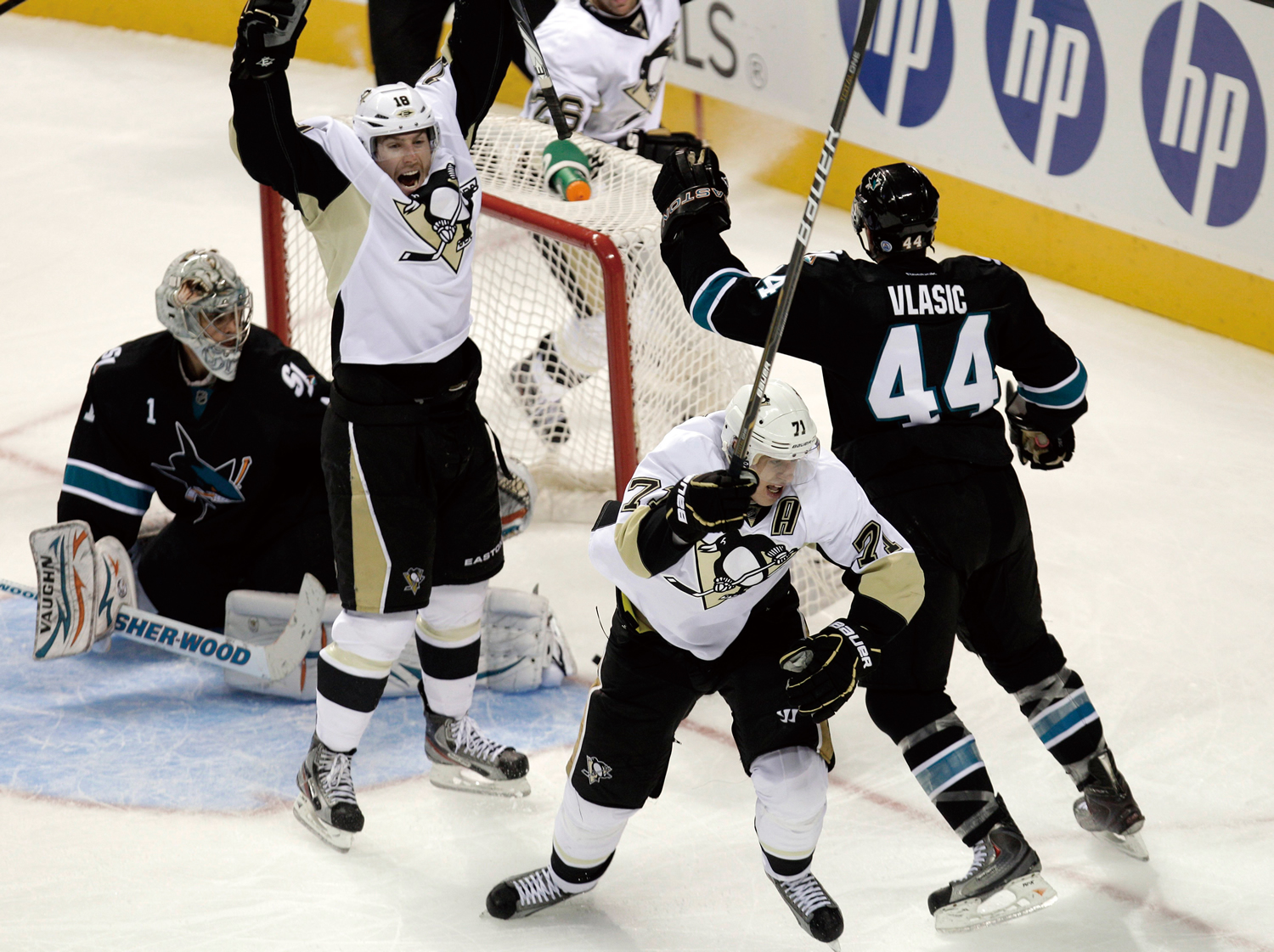 Even a two-goal comeback and shootout win couldn’t hide San Jose coach Todd McLellan’s frustration over a listless start that nearly cost his team the game.
Ryane Clowe scored the lone goal in a shootout and Thomas Greiss stopped all three Pittsburgh attempts as the Sharks overcame a two-goal deficit in the third period to beat the Penguins 4-3 on Thursday night.
“We had no business winning that game after the first period. But we found a way to get back into it,” McLellan said. “It’s two points, but we’ll be discussing our starts. There’s no doubt about that.”
It was San Jose’s eighth straight home win over Pittsburgh. The Penguins earned their first point in San Jose since a 1999 tie but still haven’t won at the Shark Tank since a 5-2 victory Oct. 22, 1997.
Only three players from that game are still active in the NHL, including Sharks forward Patrick Marleau, who scored San Jose’s first goal in this game.
After both teams failed to score in the first two rounds of the shootout, Clowe beat Marc-Andre Fleury with a forehand shot instead of going to his favorite backhand move.
“I watched the first two guys shoot and I noticed he was back in his crease,” Clowe said. “Obviously, I go to the backhand most of the time, that’s no secret. But that low blocker shot is a tough save. I saw he was back in the net. Usually when goalies are back in the net, it’s a good time to shoot.”
The victory was sealed when Greiss poke-checked the puck away from Pascal Dupuis, making him perfect in nine shootout attempts in his career. Greiss stopped 29 of 30 shots before the shootout after taking over for Antti Niemi just 2:04 into the game.
Clowe got the comeback started with his fourth goal midway through the third and Jamie McGinn tied it with 4:54 remaining as the Sharks returned from a 5-1 road trip to earn a hard-fought win.
Evgeni Malkin had two goals and an assist and Deryk Engelland scored 24 seconds into the game for the Penguins. Fleury made 34 saves.
“We started off great but we didn’t finish with the result we wanted,” Engelland said. “We got away from our game in the second and third.”
After being thoroughly outplayed in the first period and falling behind, the Sharks battled back and tied it with two goals in the third. Clowe cut Pittsburgh’s lead to 3-2 when he lifted a backhand shot that beat Fleury high to the stick side midway through the second.
The Sharks got the equalizer with a rare goal from one of their bottom two lines. Michal Handzus skated behind the net and fed McGinn at the top of the crease. McGinn knocked the puck past Fleury for his first goal of the season, tying it at 3 with 4:54 remaining.
“We aren’t producing like we wanted to and we just weren’t getting the points or the goals,” McGinn said of his line. “It was very important for us to change momentum. We kept the puck in there and get some zone time. We were rewarded with a goal.”
Matt Cooke hit the post for the Penguins about a minute later and Pittsburgh almost scored on a wild scramble in front of the net before the game went to overtime and the Penguins once again lost in San Jose.
“It’s been crazy. I don’t know what our record is here and I don’t want to know,” Fleury said. “You just have to look at it as a new game and focus on it.”
The Sharks looked like a tired team early in their first game back from the long East Coast trip. The Penguins scored twice in the opening 2:04 to chase Niemi in the shortest outing of his career.
The rough start was not all Niemi’s fault. He lost his stick on the first goal and was unable to block Engelland’s shot from near the point 24 seconds into the game.
Exactly 100 seconds later, Malkin’s centering pass deflected off San Jose defenseman Brent Burns’ skate in the crease and into the net to give the Penguins a 2-0 lead.
“I didn’t think he was ready to play, just like everybody else,” McLellan said.
Greiss came in and did a good job keeping the Sharks close as they were outshot 15-4 in the opening period.
Marleau and Malkin traded goals in the second before the Sharks staged their comeback.