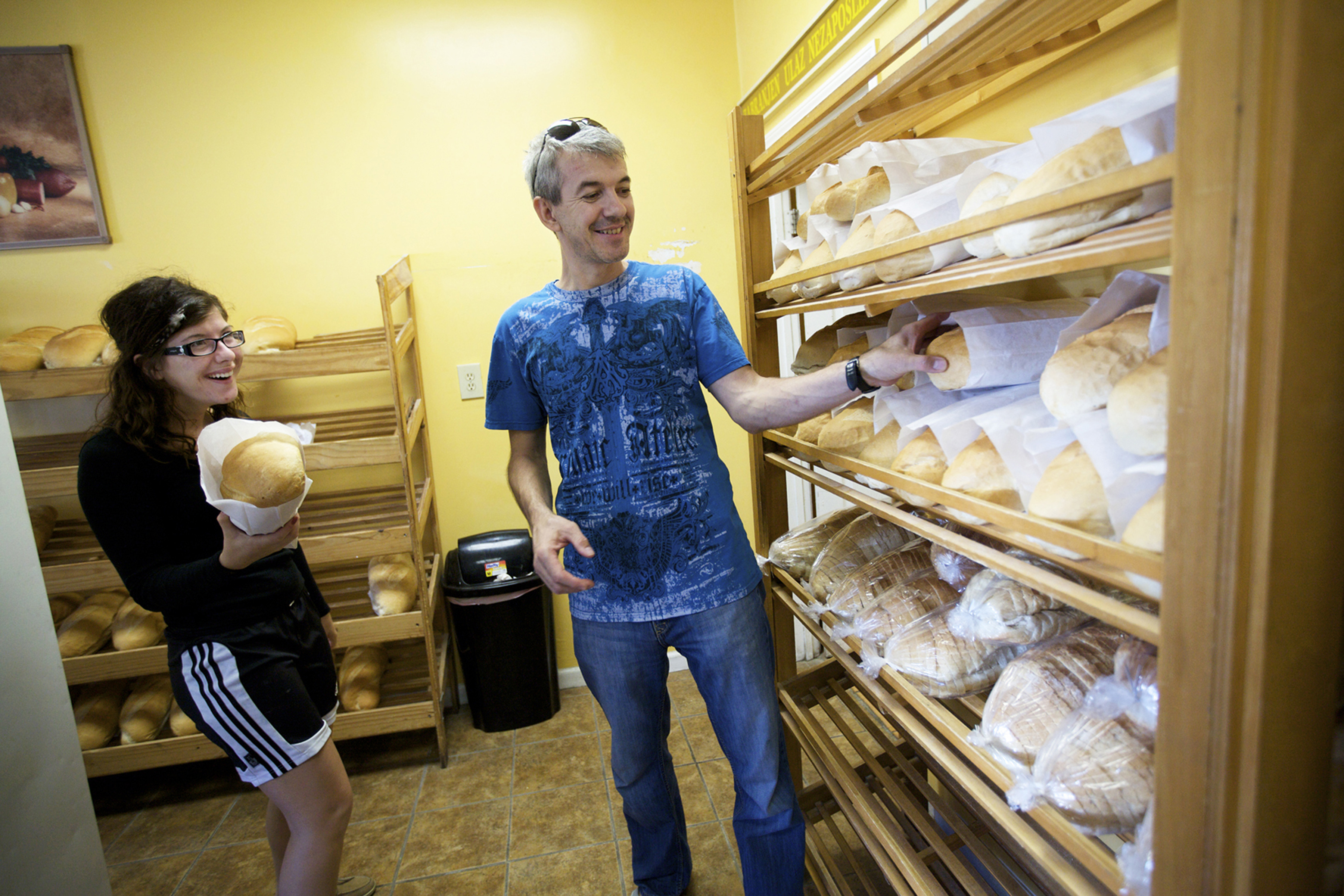 At A&M Bakery, the Grabic family bakes French baguettes that are popular with Vietnamese immigrants. They braid challah for Jewish customers.
Senad Grabic learned to bake rye in Germany after he fled his Bosnian home in 1992 as Serbian troops slaughtered thousands of his Muslim countrymen after the breakup of Yugoslavia.
The round yeasty bread that fills the shelves at A&M is a taste of what he left behind. He calls it by its Bosnian name, lepinja.
But his daughter Mirela, 22, simply calls it white bread.
“We try to keep it neutral,” said Grabic, who like many refugees and children of refugees here, lives with the specter of the war but does not want to be defined by it. “We’re internationalists.”
Nearly two decades after the Grabics and other refugees first began to arrive in St. Louis, more Bosnians live here (60,000 in all) than anywhere else outside Bosnia and Herzegovina, according to the International Institute of St. Louis. During the 1990s, when the city’s population declined more than 10 percent, Bosnians reinvigorated neighborhoods around the Bevo Mill, an earlier locus of German immigrants.
In time, they opened insurance agencies, foot reflexology clinics and truck-driving schools. They now operate coffee shops like Cafe Milano, where coconut-topped desserts and cigarettes are popular indulgences. They run butcher shops like South City Meat and Deli, where the cases are stacked with veal sausages and lamb shoulders. They now perform in hip-hop bands like South Side Bosanci and publish a nationally distributed weekly newspaper, often called the Bosnian New York Times.
Like many immigrants, people of Bosnian ancestry here negotiate a balance between conserving the ways of their homeland and assimilating. Those negotiations have sometimes been fraught, in part because most of them are Muslim.
“People were suspect of us,” said Mirza Imamovic, who came here 13 years ago and now manages Gyro Company, his family’s counter-service restaurant. “If they didn’t know us, they thought we were some kind of radicals from the Middle East.”
“They thought we ate crazy food, they thought we ate spicy curries,” he said, while assembling gyros on halves of lepinja bread.
“Now,” he said, “we run an American-sounding restaurant.”
Imamovic, like other proprietors, forgoes overt Bosnian trappings. Some restaurants display statuettes of chefs in poofy toques who look blandly continental. His family chose “Company” for the restaurant’s name to sound capitalistic. To his young middle-class customers, he offers Mexican-bottled Coca-Cola and sriracha sauce, products popularized by new immigrants and now adopted by the U.S. mainstream.
“We don’t push it,” he said. “We’re going after an American market and trying to preserve some of our identity, too.”
The International Institute of St. Louis, in concert with the refugee bureau of the State Department, designated the city as a Bosnian resettlement center because they believed there were enough jobs, economical housing and earlier arrivals who spoke the refugees’ language. (It was not a deciding factor, but it must have seemed fortuitous that the fleur-de-lis is a symbol of St. Louis and Bosnia.)
The refugees were welcomed by Bosnians like Sulejman Grbic, who came to St. Louis in 1974, and his wife, Ermina Grbic, who came here in 1981. Before they opened Grbic Restaurant and Banquet Center in 2002, they had already distinguished themselves as community organizers.
“We were like a Red Cross,” Ermina Grbic said as she and her son Ermin Grbic served an early lunch of trahana, a tomato-based soup with spaetzle-like dumplings, and sarma, a beef- and rice-stuffed cabbage roll smothered in tomato sauce. They learned enough English to help Bosnian refugees apply for driver’s licenses and sort out utility bills.
A portrait of Stari Majdan, the village where Sulejman Grbic fished for trout and gathered mushrooms as a boy, hangs on a back wall. Bosnian families stage weddings in the adjacent banquet hall.
Despite Grbic’s pride in his place of birth, he rejects attempts, however slight, to define his work and his family as anything but American.
“We don’t serve Bosnian food,” he said as his wife stacked a table with grilled pljeskavica, patties of veal, stuffed with feta cheese, and cevapi, small beef sausages, served between slices of lepinja. “We buy our chicken here, we buy our veal here, we buy everything here. We cook American food.”
Notions of identity are complicated for Bosnians. They come from a land with a long history of successful adaptation to new regimes and were challenged by their sponsors to embrace American mores quickly. Yet the memories of persecution are tangible.

Bosnians are anxious about inclusion, said Ben Moore, director of the Bosnian Memory Project at Fontbonne University in St. Louis. “One argument the Serbs made during the genocide was that Bosnians, which is to say Muslims, were not European. Bosnians have had to continually prove that they are.”

Some locals became acquainted with community members by patronizing the bakeries and restaurants that began to pop up near the Bevo Mill.

But others were put off when they saw recent arrivals slaughter and roast whole lambs or smoke sides of beef in their backyards. That’s less likely to happen these days, although some families still gather on weekends in parks south of town to roast lambs on spits, powered by repurposed windshield wiper motors.

“We had this whole ‘Bosnians are eating dogs’ phase,” recalled Anna Crosslin, president of the International Institute. “Every week a little old lady called to say she saw Muffy hanging by a rope in a neighbor’s backyard. You would have thought they’d never seen a lamb. But we got through it.”

A number of Bosnian groceries now operate here, selling (among other items) Cockta, a cola imported from Slovenia, and suho meso, smoked beef made by companies in Illinois and California. While many Bosnian-owned restaurants here stock imported products, which they sell to a mostly Bosnian clientele, they have adopted U.S. tropes and built U.S. clienteles.

Mr. X Pizza, owned by Damir Islamovic, sells to a customer base that is about 20 percent Bosnian. The only clue to his origins is that some pizzas come topped with suho meso, popular among Bosnian Muslims who avoid pork-based pepperoni.

Cultural crossovers occur often in the small family-owned cafes and bakeries that anchor strip malls south of the city, where a new generation of Bosnians hone U.S. identities along with ethnic pride.

One recent afternoon at Berix Restaurant and Deli, four young men, all of whom migrated from Bosnia to St. Louis before they began grade school, drank cans of Red Bull and bottles of Orangina. They talked about Dino Merlin, the Bosnian pop star who recently performed in St. Louis. And they talked about lunch.

“Our food is like American food,” said Ajdin Bajramovic, who came here in 1995 at age 4. “We take American food and blow it up,” he said, gesturing to a pljeskavica of pounded beef and onions, served on a round of lepinja with the circumference of an old LP record. “We make everything bigger.”

Earlier that morning, a truck driver unloaded a pallet stacked with bags of bread flour at Basic Bakery, which supplies lepinja to the Gyro Company and 14 other restaurants in town.

Alaga Basic, the proprietor, calls the bread he bakes with that flour lepinja. But his daughter, Najda Basic, who came to the United States at age 4, uses another name.

For Najda Basic, 18, bread is not a totem of the Bosnia her family left behind, but a product of America, where her family now makes its home.

“If I want people to understand what it looks like and what it tastes like, I have to use a word that everyone recognizes,” she said. So she uses an Italian term for a comparable bread, popular among middle-class consumers.

“I call it ciabatta.”

1. With your hands, mix together the flour, salt, yeast and 4 1/2 cups warm water (115 degrees) in a very large bowl until the batter is mixed thoroughly. It will look more like thick cake batter than dough and will be very sticky; do not knead.

2. Cover with plastic wrap and let rise at room temperature for 4 to 10 hours.

3. Butter two 9-by-5-inch metal loaf pans. Quickly stir down the batter, and divide evenly between the pans. Spray or very lightly brush tops of loaves with oil. Let them rest at room temperature for 30 minutes.

4. Put the pans into the middle rack of a cold oven, then turn to 500 degrees. After 30 minutes, reduce heat to 300 degrees and bake until risen and light golden, an additional 40 to 45 minutes. Cool loaves thoroughly before serving.