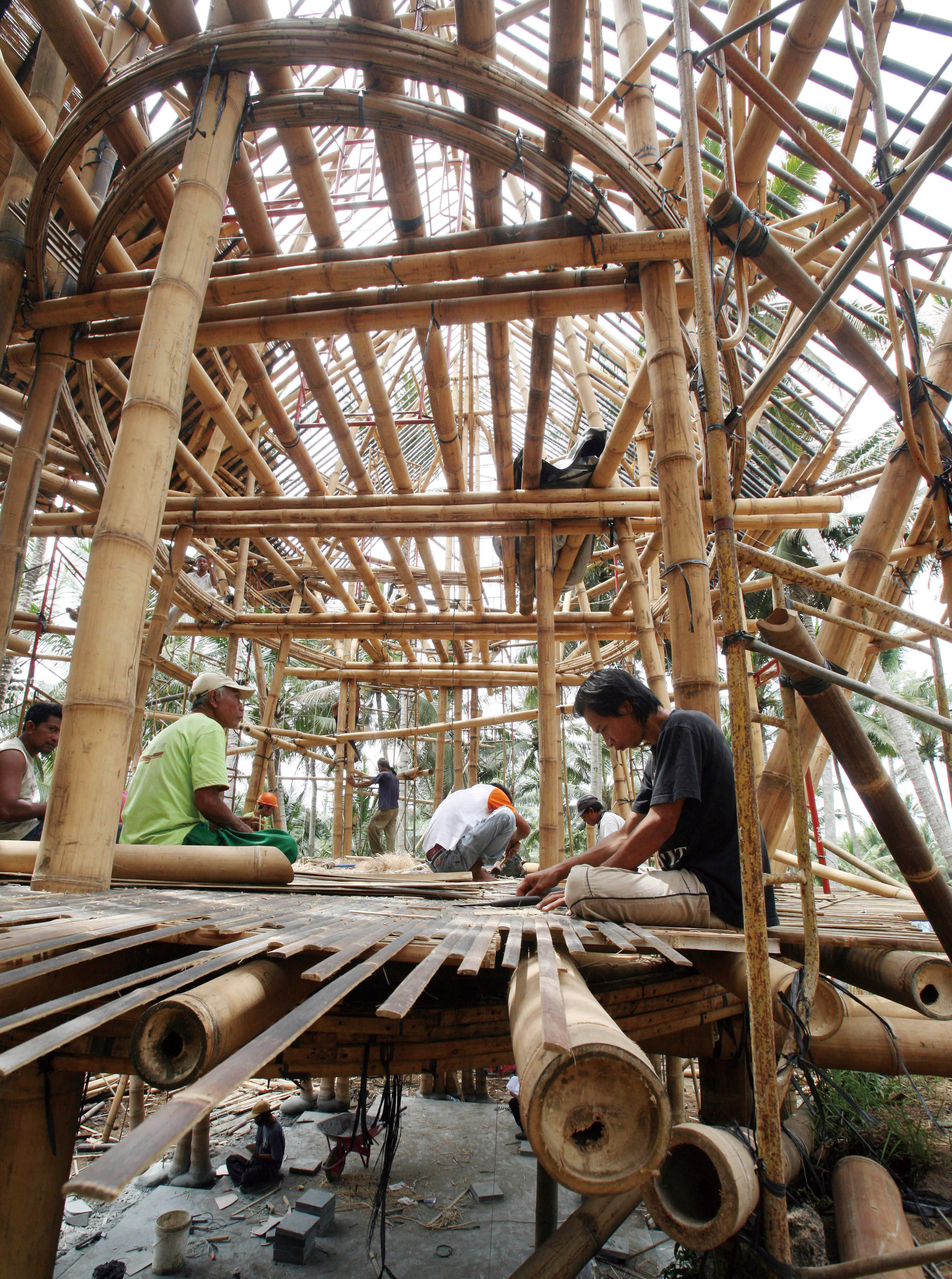 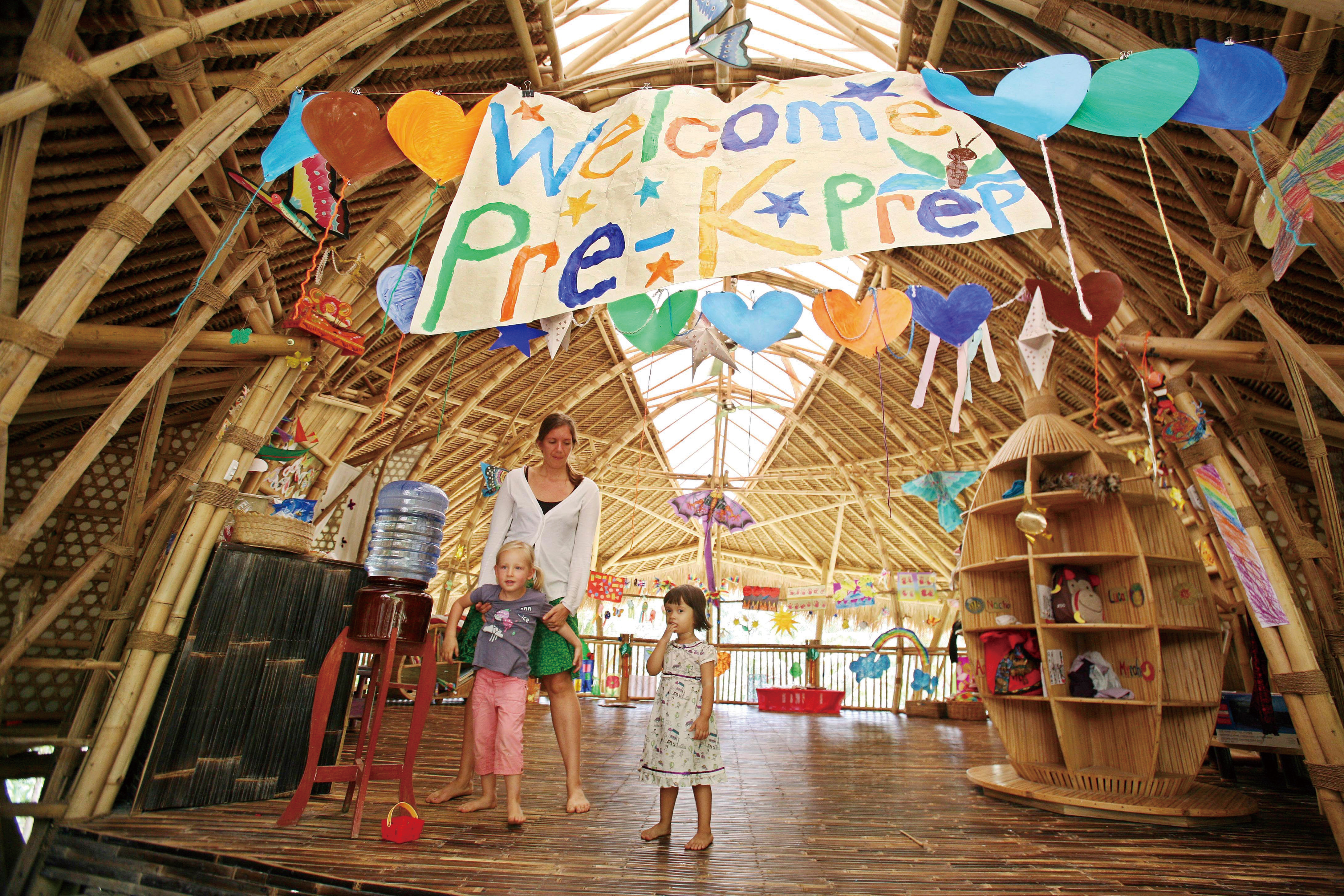 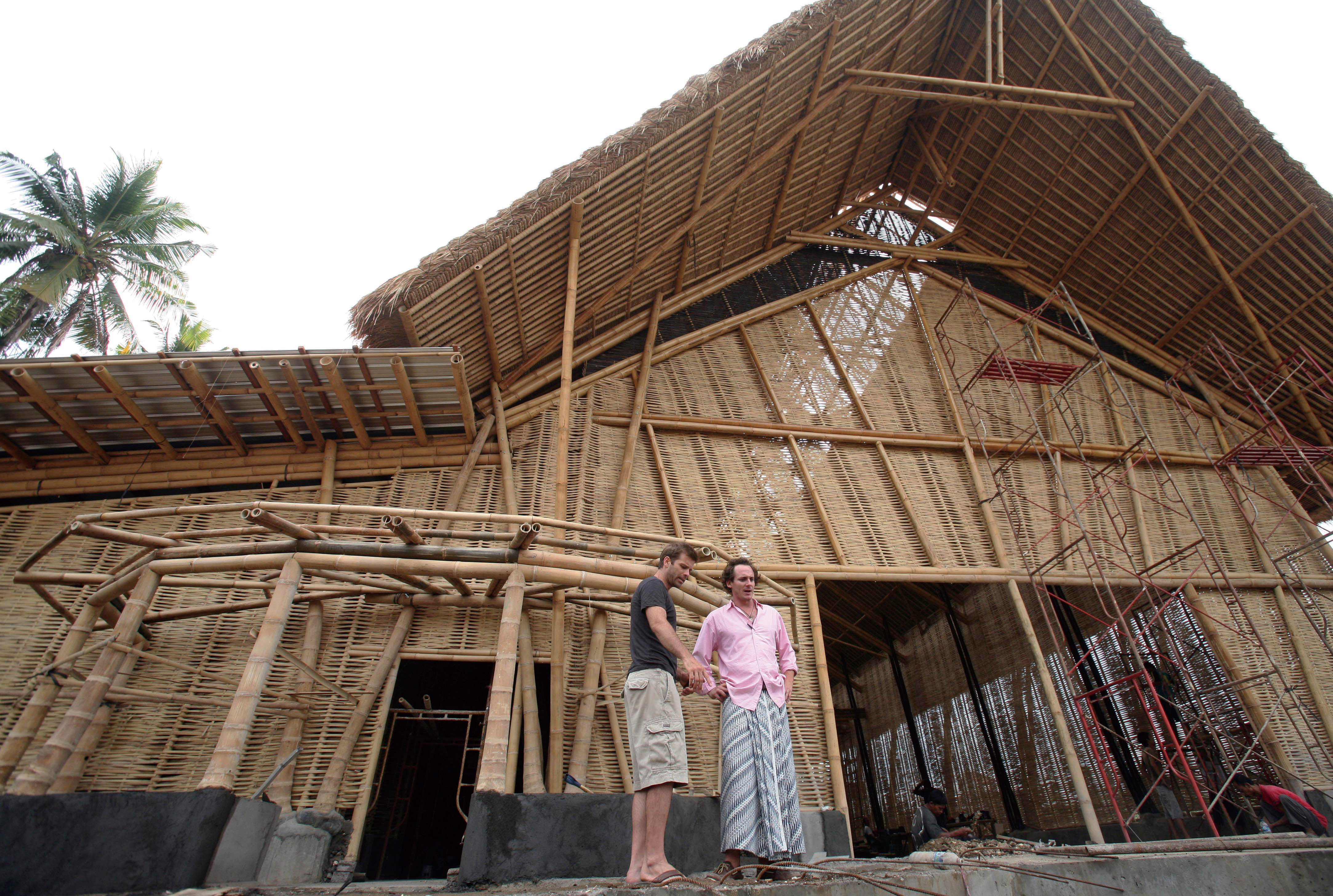 Off Bali’s beaten track, past a towering banyan tree and next to an ancient Hindu temple, the world’s largest bamboo commercial structure is slowly taking shape: a chocolate factory.
The three-story, 23,000-square-foot building — made from more than 3,000 long, flexible poles — is crowned with a graceful, sloped ceiling nearly 50 feet high.
Frederick Schilling, co-owner of the Big Tree Farms factory, calls it his “bamboo cathedral.”
The tropical plant, favored in the West for flooring, furniture and household accessories, is increasingly being touted as the construction material of choice by green advocates from South America to Africa.
Bali is leading the charge, attracting carpenters, architects and designers from across the globe to use bamboo in building everything from a school and luxury villas to exclusive resorts.
The plant, found in almost every equatorial nation, can grow up to 4 feet in a single day, reaching the height of a giant oak in less than six months. Some species are strong enough to be used for construction in five years.
Cheap — costing just $3 to plant and maintain one piece until it’s ready to go — tough as concrete, with the ability to bend, and incredibly abundant, the possibilities are almost limitless.
“Bamboo is definitely regarded as one of the most sustainable building materials in the world,” said Schilling, whose factory is scheduled to start pumping out four to six varieties of rich organic chocolate bars in January.
“As a bonus, it’s also very beautiful to work with.”
Bali’s craze, bringing together entrepreneurial expats and local craftsmen, started six years ago with the founding of a local bamboo production company for the construction of Green School, an exclusive international school with 275 students.
Since then, more than a dozen projects have sprung up across the so-called “island of the Gods.”
Green Village, a collection of designer villas with individual price tags as high as $750,000, sits down the Ayung River from Green School. Fivelements, a holistic healing retreat, is just a few miles north.
Working with the plant requires a huge shift in the way designers think.
“We’re really comfortable in our culture and in architecture with straight lines,” said Elora Hardy, the creative director at Green Village. “And bamboo is not a straight line.”
Some poles start in the earth and rise three floors.
In both plans and building, “we have to really keep in mind the curve ... where it’s going to end up at the top.”
That’s exciting and “infinitely complicated,” Hardy said.
Ben Ripple, Schilling’s partner and the founder of Big Tree Farms, which makes spices, salts and other artisanal products sold at gourmet food stores such as Dean & DeLuca, said Bali is a “microcosm” for the art.
“What you get is a situation where five years on Bali shows what happens over a 20-year-plus period in other more developed areas.”
But whether the success of bamboo here can be replicated in cooler, dry climates remains to be seen.
Strict building codes in Europe and the United States make large-scale construction projects more difficult to take on, said Victor van Praag, co-owner of PT Green Home, a bamboo design company.
Like any new industry, bamboo construction remains in a constant state of innovation, he added. The absence of well-defined standards allows for unrestrained creativity: from developing longer-lasting treatments to experimenting with design. But it also leaves room for unexpected problems.
Gove DePuy, a sustainability planner who has lived and worked in Bali full-time since 2004, said bamboo construction as it exists on the resort island was too young to be a viable option in the West.
“When you manufacture bamboo into a product, it can be tested. It can be given certifications,” he said, using flooring as an example. “But if you’re just picking bamboo, cutting it down and putting it up, you’ve left the certification to nature.”
Gove rejects the idea of bamboo becoming a worldwide super material.
He said its large-scale use should be limited to tropical regions where the plant’s abundance, affordability and proven strengths make it most practical.
Bamboo construction has also gotten attention in Columbia, Vietnam and China, the world’s leader in bamboo production.
But as green-minded expats have learned in Indonesia, their enthusiasm for bamboo is rarely matched by local people, who often view the material as second rate.
“Indonesians only think that bamboo is used for scaffolding,” said Effan Adhiwira, an architect who worked on both Green School and Green Village.
Overcoming that stigma remains a challenge for Adhiwira.
Earlier this year, he opened his own architecture studio in Jakarta, Indonesia’s bustling capital, where concrete and steel dominate the urban landscape. He hopes to spread the message of bamboo — and ensure its future as one of the world’s leading green materials — by hosting university and community workshops across the country.
As Ripple and Schilling see it, their chocolate factory is simply one of the newest and biggest examples of the plant’s untapped potential.
“Bamboo has been there in front of our noses all along,” Ripple said. “This is not a revolution. It is an awakening to the wisdom that Indonesians have known for a long, long time.”