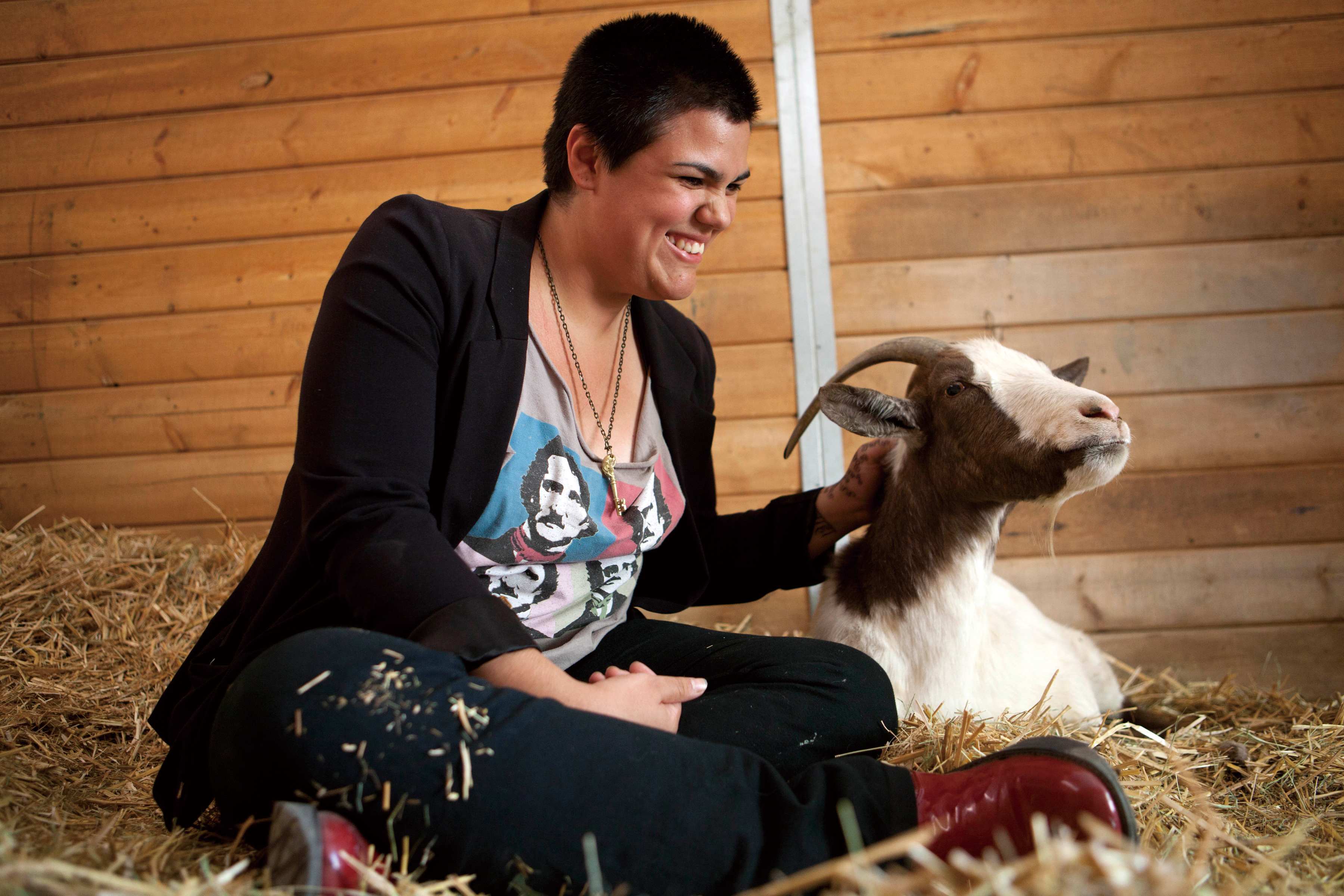 Sophie is a goat whose taste in books leans toward popular best sellers, says Solana Mejia-Schnaufer, who reads aloud to her several times a week. “I know she likes ‘The Hunger Games’ because she didn’t try to eat it. That wasn’t true of ‘Animal Liberation.”’
Mejia-Schnaufer, 21, and Sophie met at the Gentle Barn, a 6-acre ranch in Santa Clarita, Calif. The facility heals and rehabilitates abused farm animals and invites visitors with emotional and physical challenges to interact with them. Bonding with Sophie was “a life-changing experience,” says Mejia-Schnaufer, whose battle with depression and eating disorders led to a suicide attempt this year. She credits Sophie, a rescue from an abusive petting zoo, with making her recovery possible.
“Before I came to the Gentle Barn, nothing gave me hope that life was worth living,” she says. “But when I met Sophie, I thought she had the most incredible calm and open energy. There was this flow of love back and forth between us that I was feeling so in need of.”
Today Mejia-Schnaufer volunteers at the Gentle Barn and has also become Sophie’s “special person,” visiting her at least twice a week to share companionship and a good book. “Sophie is like my totem that I carry around with me all the time,” she says. “Knowing I can see her has kept me alive.”
The Gentle Barn is the fulfillment of a childhood dream, says its founder, Ellie Weiner: “I was one of those children that brought stray and injured animals home. My parents were not amused.” She adds that it was her love of animals that helped her through her own abusive childhood. “The animals saved me and healed me. If they could do that for me, then they could do it for others.”
In 1999, Weiner opened the barn doors to visitors, and she is well known for her programs for “at risk” youth, arranged through local family and children’s services. Here, inner-city gang members, drug addicts and abused youngsters can feed a cow, hug a pig or just try to find peace in a pastoral setting. Before groups meet the animals, Weiner, or her husband, Jay, tell their stories of abuse and recovery.
This is critical to reaching troubled children, says Jamie Lynn Cantor, children’s services administrator for the Department of Children and Family Services in northwest Los Angeles County. “They hear the recovery stories of these animals who, after their horrific abuse, have learned to love and trust again. More important, they learn there is hope for the future and they can have a life filled with love and people to love them. They are not hopeless anymore.”
Cantor has been bringing groups of children in foster care to the Gentle Barn since 2008. She has seen many of them bond with a miniature pony named Bonsai, whose former owner, an alcoholic, beat him brutally.
“I can’t tell you how many kids would identify with this and say, ‘My mom used to do that.”’ She adds that, though it took three years before Bonsai would trust people again, today he is a playful pony with a particular affinity for children with special needs.
“This is very unlike traditional therapy. There is no probing or rules,” says Cantor, who recalls a young boy who befriended an enormous pig named Biscuit. “The boy had been sexually abused and was very withdrawn. As soon as he saw this pig, he started to open up a bit. He laid there next to Biscuit for two hours, hugging him and talking to him. This sad little boy experienced some healing and left smiling.”
Cantor is compiling information for a survey she calls “Healing Youth Through Animals.” So far, she says, the results of one visit to the Gentle Barn “reflect significant improvement in the youth’s happiness, self-esteem, as well as decreases in anger, anxiety, hopelessness, depression and loneliness.”
Dan McCollister is community relations director of Pacific Lodge Youth Services in Woodland Hills, Calif., a nonprofit facility that offers treatment for teenage males on probation. Most residents are gang members “on the cusp of a major life decision,” says McCollister. “If they don’t change a few key things, they might end up spending their life in jail.”
He adds that since boys join gangs at a young age, his organization faces years of negative conditioning. Twice a month, he brings groups to the Gentle Barn as part of his activities schedule. “We have between six and nine months with them to make something positive click. The Gentle Barn is a great catalyst for that.”
During one visit, there was a “very tough, very hard” gang member who stood silent while hearing the story of a horse that had suffered repeated beatings, says McCollister. It was later learned that the youth’s arms had been broken repeatedly by his father while growing up. “The young man in question was later spotted in the back of the stable crying and softly petting the horse on the head, saying over and over, ‘No one is going to hurt you now.”’
McCollister emphasizes that a visit to the Gentle Barn “can blow a kid’s mind, show them compassion and empathy and, best of all, let them know that their story isn’t fully written. They can still change and lead a happy, meaningful life.”
According toA Weiner, it takes about $50,000 a month toA operate the GentleA Barn. Financing comes from individual donations, through the website, private family donations, corporate grants and foundations. Major donors include Ellen DeGeneres, Toyota, CBS, William Morris Endeavor andA Princess Cruises.
In addition, the Gentle Barn is developing a reality television show with DeGeneres. Weiner says her goal is “to see a Gentle Barn in every major city around the world.” She adds, “I would love to give people a chance to hug a cow, give a pig a tummy rub, snuggle with a turkey and see that we are really all the same. Every day I do this work, I get to witness a miracle.”