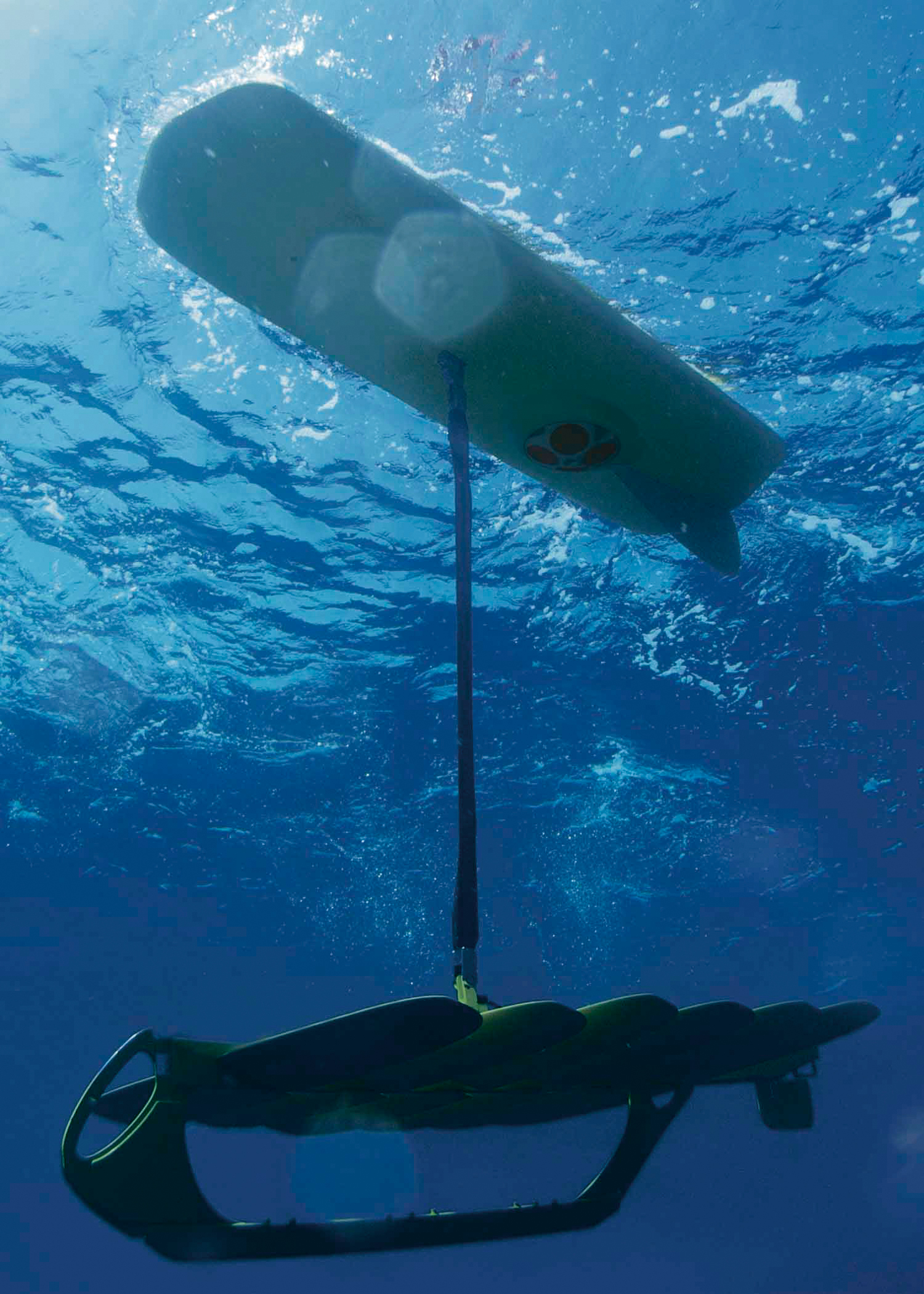 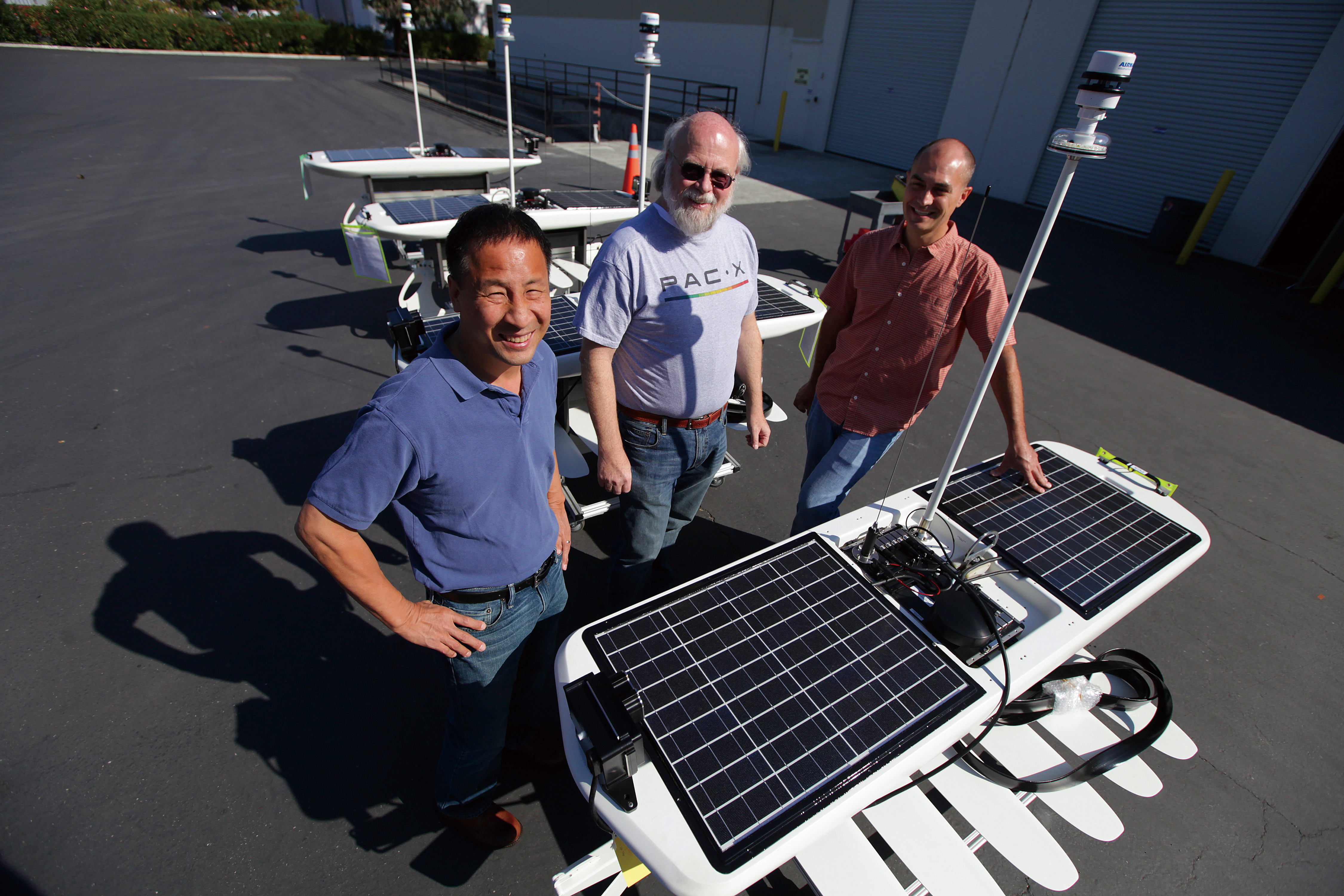 James Gosling wants to network the world’s oceans.
Gosling is transforming a fleet of robots that move out in the ocean to measure everything from weather to oil slicks, sharply reducing many of the costs of ocean-related businesses.
If his plans sound extreme, consider this: Gosling designed one of the most influential and widely used computer languages, Java.
The Silicon Valley company he joined, Liquid Robotics, has raised serious money to accomplish the mission – $40 million, including $22 million in June from VantagePoint Capital Partners and Schlumberger, the oilfield services company.
Liquid Robotics’ product, a Wave Glider, is about the size of a surfboard. Using a wave-based propulsion system and two solar panels to fuel its computers, the robots travel slowly over the ocean, recording data. The sensor data is crunched onboard by low-power cellphone chips and then shipped by satellite or cellphone to big onshore computers that do complex analysis.
“Getting a computer out into the middle of the ocean is a pretty big challenge, but that is the attractive thing,” said Gosling, chief software architect at Liquid Robotics. “Three-quarters of the planet is ocean, and it’s still dark to us.”
Liquid Robotics is working toward networking tens of thousands of the craft, adding sensors and onboard computing capability so the robots can manage themselves during projects lasting years. Right now, the robots work solo.
“This is a bit like 1960 in the Space Age, when they had launched just a few satellites,” said Edward Lu, a former astronaut who is in charge of “innovative applications” at the company. “Space is now a normal part of life, used for television transmission, credit card transactions and driving directions. We can do the same thing with the sea.”
Liquid Robotics has sold Wave Gliders to the federal National Oceanic and Atmospheric Administration for $100,000 and up, depending on what kind of sensors have been needed. The company has built about 70 Wave Gliders since 2009, largely for use by the petroleum industry and marine scientists. The company builds another 40 every three months.
It also has a service for sending data to companies, for $1,000 to $3,000 a day.
“We replace ships that cost $50,000 to $100,000 a day to operate,” said Bill Vass, Liquid Robotics’ chief executive. “Our last sortie covered 8,600 miles of the Gulf of Mexico for BP. By ship that would have cost them $10.5 million. We did it for $1.5 million.”
Other firms, like iRobot, also make seagoing robots with sensors, but these tend to be used for underwater work and aren’t designed to be networked. When the Wave Gliders talk with each other, Gosling said, they can be used to signal other robots to join them on missions like measuring the size of an oil slick or an algae bloom, or determining patterns of midocean currents, alerting ships to avoid or seek them, saving on fuel costs.
He also needs to figure out ways the robots can navigate on their own. Currently onshore pilots manage 10 to 15 gliders at a time, a technique Gosling finds primitive.
“They have tools that remind me of banging two rocks together,” Gosling said. “If a robot detects a ship, it should just get out of the way.”
There are other hazards. One craft was bitten by a shark. It lost a sensor, but still managed to make it to a rescue craft. In November the company is starting a yearlong awareness-building campaign by launching four craft on a trip across the Pacific. Two robots will aim for Tokyo and two will head for Sydney. Liquid Robotics will post sensor data online, awarding a prize to whoever comes up with the most innovative use for the information.
Lu, an evangelist for the technology, meets scientists and private sector researchers to convince them that the age of ocean-borne sensors is nigh.
He is a Google alumnus and joined Liquid Robotics in September. At Google, Lu ran teams for three years that designed cameras for digitizing books and new types of power meters and other devices that, as he put it, “collected data from the real world.”
Gosling, whose Java computer language is used in most Web applications, spent only five months at Google before joining Liquid Robotics in August.
“I was told ‘find something interesting to do,”’ he said. “This came along.”
Roger Hine, the company’s founder and now chief technical officer, began working on the project in 2005 when a wealthy friend of his father was looking for a way to track humpback whales, a project that is still going on.
“I spent a lot of time trying to figure out why no one had built one of these before,” he said.
The robots move at about 1 1/2 knots, powered by underwater wings connected to the surface vessel by a 22-foot strap. Looking something like window blinds, the wings tilt up when the craft is lifted by a wave, rising through the water and pulling it forward. On a down wave, the wings sink and tilt downward, pulling the craft forward.
If a wave is very large, the glider is pulled under water and moves through it, the way a surfer dives under a wave to avoid its full force. As further proof of concept, the company hopes to pilot a Wave Glider through a hurricane.