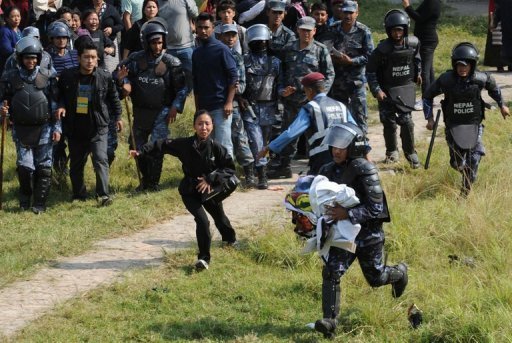 (AFP) Nepal police arrested more than 50 Tibetan exiles Tuesday as they demonstrated in support of monks from their homeland who have set themselves on fire in protest against Chinese rule, campaigners said.

Nine Buddhist monks and a nun have self-immolated since March in southwest China's Sichuan province, home to a large ethnic Tibetan population.

Hundreds of Tibetan exiles gathered in solidarity around a monastery on the outskirts of Kathmandu, but Nepalese police barred hundreds more from getting in.

"A total of 53 Tibetans were arrested when they came out the monastery after the ceremony," Tsewang Dolma, president of theTibetan Youth Club, told AFP.

She said she was detained along with another 35 women and 17 men.

Dozens of policemen were deployed behind the monastery where prayers were taking place, an AFP reporter saw, while other officers blocked the entrance.

Half a dozen policemen climbed on the roof of a house adjoining the monastery and seized posters of the Dalai Lama and the monks who have self-immolated.

A scuffle broke out when the protesters, including women, teenage girls and elderly men, tried to grab the posters.

Nepal, which is home to around 20,000 Tibetans, is under intense pressure from Beijing over the exiles, and has repeatedly said it will not tolerate what it calls "anti-China activities".

There have been several similar protests in the past in Nepal. The police generally don't charge the protesters and they are soon released.

The government has said it will continue to allow thousands of Tibetan exiles to live in Nepal but won't let them protest against China.