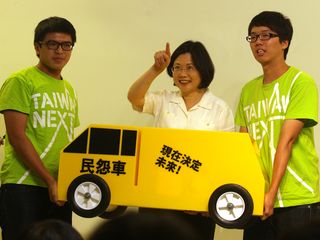 Opposition Democratic Progressive Party (DPP) presidential candidate Tsai Ing-wen said Thursday that her running mate will come out in due time and she is keeping her decision flexible at this stage.

Tsai was responding to dogged questions by the media about whether she is having trouble picking up a partner.

President Ma Ying-jeou of the ruling Kuomintang announced in late June that he would run with Premier Wu Den-yih in the January 2012 presidential election.

She stressed that there is really no difficulty in choosing the candidate.

Reports have surfaced that her choice has been boiled down to "one of the two Su's"-- former Premier Su Tseng-chang and DPP Secretary-General Su Jia-chyuan.

Veteran politician Su Tseng-chang, who lost to Tsai in a party primary in April, said at the time that he accepted the result with humility and urged support for Tsai. He has said repeatedly that he would not serve as Tsai's running mate, but would throw full weight behind her election campaign.

Su Jia-chyuan, who served as Pingtung County magistrate and interior minister previously, is considered to be a rising star within the party.

"We're not going to give a birth by C-section as the candidate will come out in due time," Tsai said.

She said her aim is to win the race.

"I'm keeping the choice flexible as much as possible at this stage," Tsai said, saying that "different candidates require different strategies."

"The party is continuing its discussion, and will also consider the will of the candidates themselves," Tsai said, calling for more patience for her to make a choice.

She did not answer the questions on whether the matter will be finalized before her scheduled visit to the United States next Monday and if she met Su Tseng-chang Sept. 5.

DPP sources said that Tsai has not targeted a specific candidate and that she did meet with Su Tseng-chang on Sept. 5. It is not unusual for the two to meet each other.

She does meet Su Jia-chyuan often because their offices are near each other, the sources added.

Tsai is scheduled to go to the United States Sept. 12-20, during which she will visit think tanks and scholars in Washington D.C. , Boston, New York, Houston and Los Angeles. She will also deliver a speech at Harvard University.

She plans to meet with Taiwanese expatriates and businessmen and auction autographed white T-shirts emblazed with her campaign slogan "Taiwan Next."