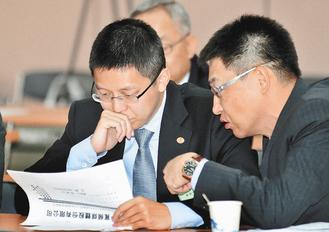 Want Want Broadband defended Tuesday its proposed acquisition of China Network Systems (CNS), Taiwan's second-largest cable TV provider, arguing that not a dollar of the funding used on the merger is from China.

Chao said the acquisition spending, totaling over NT$70 billion (US$2.41 billion), had been screened by the National Security Council and Mainland Affairs Council.

"It's unfair to say that the funding was from China," Chao said.

He was rebutting the remarks made by opposition Democratic Progressive Party Legislator Pan Meng-an, who accused the Want Want Group earlier in the day of having probably financed their buyout of China Network Systems (CNS) with Chinese government money.

Pan wanted the National Security Council and other relevant agencies to investigate the source of the funding.

Chao argued that Want Want Group Chairman Tsai Eng-meng spent the money on the proposed acquisition to show support for the government's "Return-the-Salmon-Home" campaign launched several years ago to encourage Taiwanese businessmen operating in mainland China to relocate part of their investment back to Taiwan.

"The purchase plan should be praised, rather than suppressed," Chao said.

The deal was conditionally approved by the Fair Trade Commission in April, and the next hurdle will be to pass screening by the National Communications Commission (NCC) and the Investment Commission under the Ministry of Economic Affairs, as well as the Financial Supervisory Commission.

NCC organized the hearing to address public concern of many quarters over possible impact of the proposed acquisition on Taiwanese society, including industry competition, public interests, consumers' rights and monopoly over opinions.

The acquisition plan reflects the ambition of the group, which already owns print and digital media, to get a foothold in Taiwan's cable TV.

Tsai said at the hearing that once the acquisition plan is approved, Want Want Broadband will spend over NT$7.5 billion in seven years to accelerate digitization of television broadcast in Taiwan and provide more high-speed broadband products for consumers to choose from.

Experts and academics had mixed opinions on the acquisition plan at the hearing.

Chuang Chun-fa, a professor with Jinwen University of Science and Technology, said he does not worry about an opinion monopoly once the Want Want Group successfully crosses over to the cable TV sector.

Chuang said although the group is already the largest media operator in Taiwan, it has taken only about 10 percent of the country's "opinion market." He did not elaborate.

However, Hung Chen-ling, an associated professor with National Taiwan University's Institute of Journalism, said the acquisition will lead to a monopoly over opinion.

Hung called for NCC to exercise discretion in screening the plan and not grant the green light before all concerns are addressed.