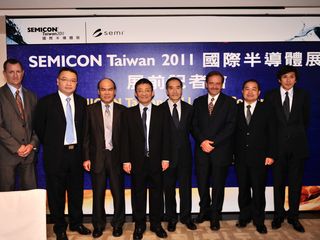 The annual exhibition will have 570 registered exhibitors taking up 1,200 booths, up 2 percent and 5 percent, respectively, from last year, according to the Semiconductor Equipment and Materials International (SEMI), which is organizing the event.

The number of the show's pre-registered visitors has surged 34 percent to 23,000 people from 40 countries compared with 17,165 from 29 countries in 2010, said Terry Tsao, president of SEMI Taiwan and Southeast Asia, at a pre-show conference.

"We are considering moving to a bigger venue at the Nangang Exhibition Hall next year in view of the increasing number of visitors," he added.

Separately, the SEMI has forecast that global chipmakers will increase spending on new equipment by 12 percent over last year to US$44.33 billion (NT$1.29 trillion) in 2011, with the highest amount of spending again expected to be by Taiwanese chipmakers.

"The capital equipment market in Taiwan is expected to continue its investment momentum and to reach over US$10 billion in both 2011 and 2012, which will again make Taiwan the single largest semiconductor equipment market in the world," said Clark Tseng, senior research manager of SEMI.

Meanwhile, the worldwide semiconductor material market is forecast to show healthy growth in 2011 and 2012 to reach US$46 billion and $47 billion, respectively, Tseng said.

Taiwan is expected to surpass Japan as the largest semiconductor material consumer in the world this year, reaching US$9.62 billion, and is forecast to hit $10 billion in 2012, he added.