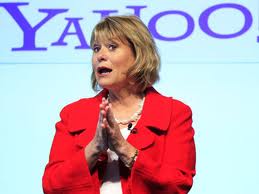 Yahoo Inc. fired Carol Bartz as CEO Tuesday after more than 2½ years of financial lethargy that had convinced investors that she wouldn't be able to steer the Internet company to a long-promised turnaround.

To fill the void, Yahoo's board named Tim Morse, its chief financial officer, as interim CEO. Bartz lured Morse away from computer chip maker Altera Corp. two years ago to help her cuts costs. Yahoo, based in Sunnyvale, Calif., said it is looking for a permanent replacement.

The shake-up was initially reported by the All Things D technology blog.

Bartz's austerity campaign has helped boost Yahoo's earnings, but the company didn't increase its revenue under her leadership at a time when the Internet ad market has been growing.

Bartz's inability to snap Yahoo's financial funk, along with recent setbacks in an online search partnership with Microsoft Corp. and an investment in Chinese Internet giant Alibaba Group, proved to be her downfall.

Yahoo has now replaced three CEOs in a little over four years. During that time, Yahoo has been losing ground in the Internet ad race to online search leader Google Inc. and Facebook even though its website remains among the world's most popular. Her ouster comes with 16 months left on a four-year contract that she signed in January 2009.

Known for her no-nonsense leadership and sometimes gruff language, Bartz arrived at Yahoo as a respected Silicon Valley executive who had won praise for turning around business software maker Autodesk Inc. But she had no previous experience in Internet advertising, the main way that Yahoo makes money.

That void on her resume immediately raised questions whether she was qualified for the job, and those doubts only escalated as Yahoo's revenue continued to sag.

At first, Bartz blamed bad timing; she started the job during some of the bleakest months of the Great Recession. Later, she would say that she inherited such as mess from her two predecessors, Yahoo co-founder Jerry Yang and former movie studio boss Terry Semel, that it would take time to get Yahoo back on the right track.

At one point, she even compared her challenge to those that faced Steve Jobs when he returned to Apple Inc. as CEO in 1997.

Unlike Jobs, Bartz, 63, never was able to articulate a strategy to win over investors.

"She focused on plugging holes in the ship instead of turning it around," said Gartner Inc. analyst Ray Valdes.

The disappointing performance was reflected in Yahoo's stock price, which closed at $12.91. That's 81 cents, or 7 percent, higher than where Yahoo shares stood when Bartz was hired as CEO. During the same period, Google's stock price has risen by more than $200, or 66 percent.

Bartz never hit any of the price targets that the board set for her when she was hired, a shortfall that meant none of the 5 million stock options that she received upon signing her contract ever vested.

Although Bartz's exit as CEO came suddenly, her departure isn't a shock. The pressure to replace her grew earlier this year after Bartz acknowledged Yahoo's search partnership with Microsoft wasn't producing as much revenue as the companies anticipated. Then, in May, Yahoo stunned investors by disclosing that Alibaba had spun off an online payment service in a move that threatened to diminish the value of Yahoo's investment in the Chinese company.

Alipay in July agreed to a complex settlement that could eventually be worth more than $1 billion to Yahoo, but there were too many uncertainties in the deal to placate shareholders.

Yahoo Chairman Roy Bostock had steadfastly stood behind Bartz whenever she was attacked by investors or analysts. In a Tuesday statement, Bostock thanked Bartz for "her service to Yahoo during a critical time of transition in the company's history" without providing an explanation for why the board decided to replace her.

BGC partners analyst Colin Gillis said Yahoo's board "has got to look in the mirror here."

"Swapping the CEO without swapping the (board) chair doesn't solve your problem," he said. "The person that hired Carol to begin with deserves to share the culpability."

With its stock sagging and its management in limbo, Yahoo could be more vulnerable to a takeover attempt by a private equity group or another opportunistic bidder attracted to what remains one of the Internet's best-known brands. Microsoft offered to buy Yahoo for $47.5 billion, or $33 per share, in 2008 only to be rebuffed.