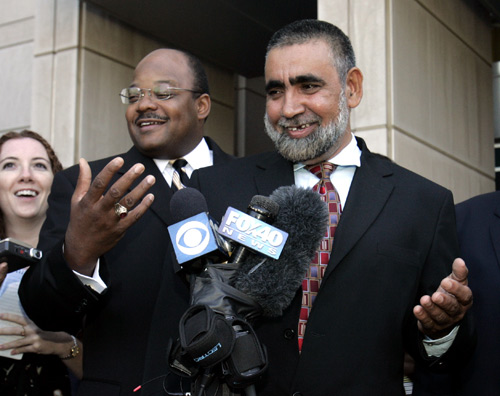 A man originally from Pakistan who pleaded guilty earlier this year in a terrorism probe that focused on whether his son attended an al-Qaida training camp in Pakistan has been released from federal custody.
Umer Hayat pleaded guilty in May to lying to a customs agent about trying to carry US$28,000 into Pakistan three years ago after a federal jury deadlocked on two charges alleging that he lied to investigators about his son's attendance at the terrorist camp in 2003.
He variously claimed the cash was for wedding gifts or to buy a house for his family. The terrorism-related charges were dismissed as part of his plea agreement.
His son, Hamid Hayat, 23, was convicted on terrorism charges and faces at least 30 years in prison.
Hayat, 48, an ice cream vendor in Lodi, California, has been under house arrest since his plea. He spoke to reporters after he was set free Friday.
Despite his ordeal, Hayat, a naturalized U.S. citizen, said he loves his adopted country.
"I lost my house and I lost my job, and right now we're living in the garage with my family, which is difficult for us," Hayat, 48, said outside the federal courthouse. "We lost everything for nothing."
Hayat his son Hamid were arrested in June 2005 and charged with lying to federal agents about whether the younger man attended an al-Qaida training camp.
Hamid Hayat also was charged with providing support to terrorists for attending the camp. He was convicted in April and is awaiting sentencing.
The same jury deadlocked on the charges against his father.
Now, Hayat said, collection agencies are after him for unpaid credit card bills and his younger children have trouble sleeping. Still, he said he wants to start rebuilding his life even as he continues to fight for his oldest son's freedom. "I still love this country," Umer Hayat said. "We are Muslims and we are peaceful people. ... I hate terrorism."
During Hayat's sentencing hearing Friday, U.S. District Court Judge Garland E. Burrell Jr. gave him credit for time served, fined him US$3,600 and ordered him to spend the next three years on supervised release. A tracking device was removed from his ankle.
"We think the sentence imposed by the court is wholly appropriate, given the false statements Umer Hayat made in 2003 and 2005," Assistant U.S. Attorney S. Robert Tice-Raskin said outside the courtroom. "We believe justice has been served."
The Hayats were ensnared as part of a larger, post-September 11 inquiry into the Muslim community in Lodi, a farming and wine-growing region about 35 miles south of the state capital. Agents also detained and eventually deported two Muslim imams and one of the cleric's sons for immigration violations.
The key to the investigation was an informant the FBI recruited from Oregon, where he was working a variety of fast food and convenience store jobs.
The informant, Naseem Khan, was a Pakistani native who befriended the younger Hayat and grew so close to his family that they often allowed him to sleep over.
Umer Hayat said he is looking forward to again selling ice cream from his battered van in a community where he said he is still loved despite the arrest and prosecutions.
"I'm glad it's over," he said softly as he left the courtroom.