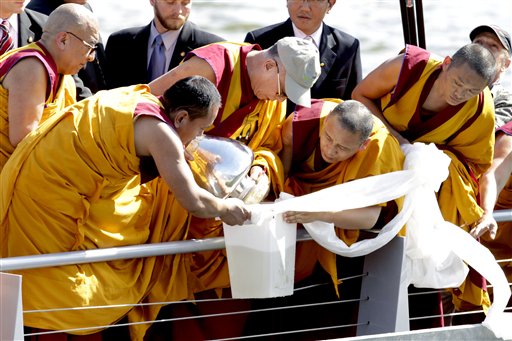 China on Sunday slammed President Barack Obama's meeting with the Dalai Lama as an act that has "grossly interfered in China's internal affairs" and damaged Chinese-American relations.

The strident statement from China's Foreign Ministry came hours after Obama met with the Tibetan spiritual leader and Nobel Peace Prize laureate, who was in Washington for an 11-day Buddhist ritual.

China had already called on the United States to stop Saturday's meeting, warning it could hurt relations between the two countries.

After the 45-minute private session at the White House, China said the Foreign Ministry and the Chinese Embassy had lodged objections with U.S. representatives in Beijing and Washington.

"Such an act has grossly interfered in China's internal affairs, hurt the feelings of the Chinese people and damaged Sino-American relations," Chinese Foreign Ministry spokesman Ma Zhaoxu said in the statement.

China considers the Dalai Lama a separatist intent on ending Chinese rule over Tibet. The Nobel laureate says he seeks only a high level of autonomy for Tibet.

"It's difficult to say at the moment whether this meeting will be affected," said Jin Canrong, an international affairs expert at Renmin University. "But this meeting is quite important and whether it takes place or is canceled will give us an indication of what the follow-up impact will be."

Vice President Joseph Biden is also scheduled to visit China this summer, followed by a trip to Washington by his Chinese counterpart, Xi Jinping.

Obama last met with the Dalai Lama in February 2010, infuriating Beijing during a tension-filled year in which China and the U.S. also feuded over online censorship and arms sales for Taiwan. Relations were considered back on track in January when President Hu Jintao visited Washington.

"I think after this meeting Sino-U.S. relations will be rather cold over the next few months," said Jin. "It may lead to the suspension of high-level official exchanges and therefore impact on the strategic mutual trust and cooperation between China and the U.S. in some fields, including military ties."

The White House said that during Saturday's meeting, Obama "underscored the importance of the protection of human rights of Tibetans in China." Obama restated U.S. policy that it does not support Tibetan independence.

Tibet has been a source of controversy for decades, since Beijing sent troops to occupy the country following the 1949 Communist revolution. It insists the region has been part of Chinese territory for centuries, a claim disputed by many Tibetans who say their Himalayan region has a long history of autonomous rule led by a series of Buddhist leaders.

A failed uprising in 1959 led the Dalai Lama to flee into exile in India.

On Sunday, major Chinese papers carried the same long article by the state-run news agency Xinhua that praised the 60 years of communist rule over Tibet.

Under the headline "Deep care and a great leap forward," the article said that Tibetans' living standards had greatly improved and the government had invested heavily in Tibet's infrastructure, with this year's investment expected to reach 26 billion yuan ($4 billion), a new high.