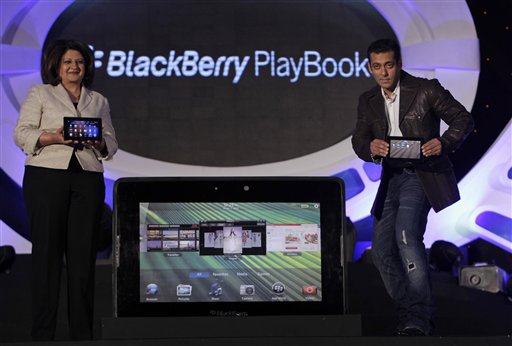 BlackBerry maker Research In Motion Ltd.'s co-CEO told shareholders Tuesday that the company is facing challenges as it moves toward what it calls its biggest product launch yet.

At RIM's annual meeting Tuesday, Jim Balsillie cited delays in releasing the company's new operating system. But he said seven new BlackBerry smartphones will run the advanced system in the coming months, enabling RIM to stay on track to meet its financial guidance for the year.

Mike Lazaridis, who shares the title of co-CEO with Balsillie, said the delays were due to company's efforts to get its smartphones to meet market expectations, adding that the technology in the new BlackBerry Bold jumps a generation.

"It may have delayed us, but we are going to come out ahead," Lazaridis said of the company's decision to hold off on the rollout of the new BlackBerry Bold in order to bolster it to face what he called an "arms race" brewing among its smartphone competitors.

The annual meeting comes after RIM's share price has fallen more than 50 percent this year.

The company, based in Waterloo, Ontario, once dominated the corporate smartphone market but has been struggling to come up with a device to compete with Apple Inc.'s iPhone and smartphones running Google Inc.'s Android operating system.

RIM also got poor reviews for its tablet, called the PlayBook, launched in April, and about 1,000 of the devices had to be recalled because of defective software.

The company's inability to stay on top of innovation and create a product that consumers find as sexy as the iPhone has disgruntled some shareholders who are anxious to see what's next in its device roster.

Some at the meeting were critical of RIM's lack of marketing efforts in the face of rivals such as Apple — including one shareholder who brought pictures of the RIM's PlayBook tablet display at a Best Buy store that he said fell short of the rival offerings.

Lazaridis said the company is continuing to build on RIM's reputation for security when it comes to email and added that trials of its PlayBook tablet were under way at more than 1,500 companies.

"This includes multiple government agencies and groups from both the public and private sectors," he said.

The falloff in RIM's share price has prompted takeover rumors. One shareholder asked on Tuesday about a "poison pill" rights plan to block a hostile bid.

Balsillie said a rights plan could be put in place in a "blink of an eye" if a hostile offer was made for the company.

As it struggles to regain its market position, the BlackBerry maker's management structure has also come under criticism.

Balsillie and Lazaridis currently serve as both co-CEOs and co-chairmen of the company. Some analysts and shareholders have called for an independent chairman to push the company back on an upswing.

RIM avoided a shareholder vote on a plan to split the roles of CEO and chairman before the meeting when it reached a deal with Northwest & Ethical Investments LP to establish an independent committee to review the role of the chairman.

Northern Securities analyst Sameet Kanade said setting up a committee just prolongs the need to split up the roles.

"We don't think it bodes well for the stock in the short to medium term," Kanade said from Toronto. "It looks nice on paper, but it doesn't really solve the more pressing concerns of who is looking out for shareholder concerns on the board and who is looking out to make sure the CEO or the co-CEOs are taking the right and decisive actions."

Kanade said he believes Lazaridis should be the CEO with Balsillie as the chief marketing officer or filling other roles.

"Accountability would be more direct with one person running it. There's no one looking out for the shareholders' interests on the board."

In a vote of confidence Tuesday, shareholders re-elected the RIM slate of directors, including lead director John Richardson. U.S.-based proxy advisory firm Glass Lewis had recommended that shareholders withhold their support for Richardson.