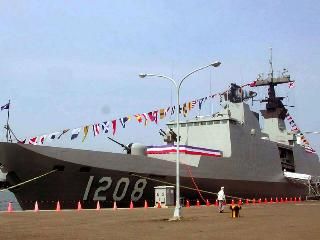 The French defense company Thales has wired a court-ordered fine of US$875 million into a Taiwan government bank account, the Ministry of National Defense (MND) said Tuesday.

The news came more than a year after an international commercial arbitration court gave an April 2010 ruling in favor of Taiwan in the scandal-plagued Lafayette frigate deal.

Thales, a French contractor known in the 1990s as Thomson-CSF sold six Lafayette frigates to Taiwan in 1991, in the process paying out unauthorized commissions in violation of the contract.

The US$875 million includes a fine, interest, litigation fees and other related expenses that have built up over more than 10 years of legal wrangling between the two countries, according to a ministry press release.

MND spokesman Lo Shao-ho said the money, which is now in an account owned by the MND, will be transferred to the state treasury soon.

Lo said the "commercial dispute" will not affect military cooperation between France and Taiwan. However, he declined to provide details on what the cooperation entails, saying that "the lack of diplomatic relations makes disclosure inappropriate."

Millions of dollars in illegal kickbacks are believed to be held in frozen Swiss bank accounts held by Thomson-CSF's agent at the time, Andrew Wang, and have become a principal focus of Taiwan's drive to get back the illicit commissions paid in the deal.

Wang fled Taiwan following the death of Navy Captain Yin Ching-feng under suspicious circumstances in late 1993. Yin is believed to have been poised to blow the whistle on colleagues who had allegedly received kickbacks from the Lafayette deal.

Wang has been wanted by the Taiwanese authorities on murder charges since September 2000.