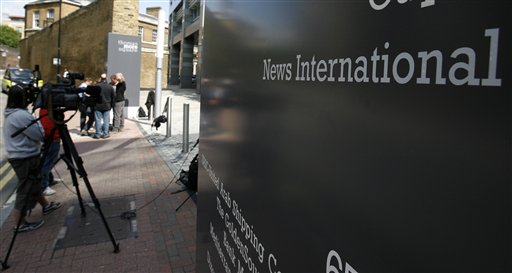 The phone hacking scandal in Britain now threatens to engulf top executives and has hobbled the company's stock, which has stagnated for a decade.

If News Corp. operated like many corporations in the midst of scandal, the CEO's job would be in jeopardy. But the media conglomerate runs more like a family dynasty, and analysts suggest Murdoch, its 80-year-old patriarch, is likely to maintain his grip for now.

As the company's chief executive since 1979, Murdoch has built an empire with a wide array of media assets, including the Fox broadcast network, cable channels such as FX and Fox News, TV stations, the 20th Century Fox movie studio and newspapers around the world, including The New York Post and The Sun in the U.K.

He controls the company through a family trust that owns 40 percent of the voting stock and the largest chunk of News Corp.'s shares at 12 percent. One observer even praised his ability to parachute into the crisis as he did this past weekend, pulling a maneuver that allowed the British government to put the issue on the backburner while public outrage subsides.

Last week, an outcry ensued over the years-old hacking scandal when it emerged that, along with the phones of celebrities and politicians, News of the World tabloid reporters had broken into the phone messages of a murdered girl, crime victims and the bereaved families of soldiers.

Murdoch took two key actions to prevent the fallout from endangering News Corp.'s proposed $12 billion acquisition of the 61 percent stake of British Sky Broadcasting that it does not already own.

One was to shutter the 168-year-old tabloid at the center of the crisis, which published its last edition on Sunday. The second move was to withdraw a key concession in the BSkyB deal that would have allowed for more competition in the market, the sale of Sky News.

The withdrawal of the concession allowed the government on Monday to contest the deal on competition grounds, the least damaging way to appease an outraged public, and avoid a government probe into whether News Corp. was legally "fit and proper" to be a media company owner at all. Culture Secretary Jeremy Hunt's referral of the case on Monday to Britain's Competition Commission for a full-scale inquiry will delay any approval by months.

"The government no longer has to resort to the 'fit and proper' test to prevent the takeover — something that Murdoch would want to avoid at all costs," said Louise Cooper, markets analyst for London-based BGC Partners. "It's probably the (lesser) of the bad options really."

Still, many observers point to the crisis as indicating a problem at the top echelons of the company.

Several high-ranking executives may be swept up in a simultaneous criminal probe, including Murdoch's son and deputy chief operating officer, James Murdoch, who as head of European and Asian operations authorized payments to hacking victims; the chief executive of U.K. subsidiary News International Rebekah Brooks, who edited News of the World when some of the hacking occurred; and Les Hinton, who was chairman of News International during some of the years the abuses took place, and is now chief executive of Dow Jones & Co. Hinton is a member of the board of directors of The Associated Press.

The probe has also raised the specter of possible charges in the U.S. under the 1977 Foreign Corrupt Practices Act, whose anti-bribery provisions could ensnare executives if allegations of payoffs to British police officers are proven.

"This is going to have ripple effects over in the U.S., too, but it may take a while for it to all play out," predicted newspaper analyst Ken Doctor of Outsell Inc.

Doctor speculated that Murdoch could choose to step aside as CEO and retain only his chairmanship. That would leave open a question of who succeeds him, a family member or chief operating officer Chase Carey.

"Like a monarch out of Shakespeare, Rupert has been testing out successor scenarios for years," Doctor said. "The pressures on the share price may force him to do something now because the share price is important to him and his company."

A shareholder lawsuit called out the company's purchase this year of Shine Group, the TV production studio run by Murdoch's daughter Elisabeth Murdoch. The 415 million pound ($661 million) deal was cited as an example of nepotism that has plagued the company. In an amendment filed last week, the shareholders jumped on the phone hacking as a new reason why News Corp. needs an executive shake-up.

"These revelations show a culture run amuck ... and a board that provides no effective review or oversight," the shareholders asserted in a filing with the Delaware Chancery Court.

The suit alleges that Murdoch treats News Corp. "like a family candy jar, which he raids whenever his appetite strikes." The shareholders own nearly a million shares, a tiny fraction of 1 percent of the more than 1.8 billion outstanding.

Last month, News Corp. offloaded social networking site Myspace for $35 million, a fraction of the $580 million it paid in 2005, and after more than $1 billion in cumulative losses over nearly three years.

In 2009, it was forced to write down $2.8 billion of the value of Dow Jones & Co. Inc., which it bought two years earlier for $5.7 billion after an expensive courtship of the Bancroft family that allowed Murdoch to seize the U.S. newspaper he prized, The Wall Street Journal.

"They overpaid and it was a bad use of shareholder capital," said Morningstar analyst Michael Corty.

Now, the phone-hacking crisis is jeopardizing the one deal that Wall Street analysts finally support — the acquisition of British Sky Broadcasting.

As of March, News Corp. has amassed $11.8 billion in cash in preparation for the deal and if the bid is derailed, analysts fear that cash may be spent on something far less attractive.

Still, Murdoch has the faith of most News Corp investors. He isn't the only media executive with eyes bigger than his stomach. Time Warner Inc. only two years ago untangled itself from the worst corporate merger in history with AOL. Its stock is down 62 percent from a decade ago.

While News Corp. took a 7.6 percent pummeling on Monday, its widely traded Class A shares closing down $1.27 at $15.48, shares are up 11 percent from a decade ago, compared to a 22 percent gain for the Dow Jones industrial average. Over the same time, peer media company The Walt Disney Co. shares are up 62 percent.

The main danger to the company is not the probe or that executives may be sacrificed, analyst Corty said. It's what News Corp. decides to do with its hoard of accumulated profits.

"From an investment point of view, if this BSkyB deal gets delayed too long, then the question is what are they going to do with the cash," he said.