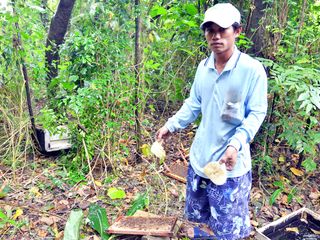 Local authorities are searching for a Formosan black bear that they believe was hit by a train late Sunday night as it crossed a bridge in Taitung County, and they warned residents in the area to be on the alert.

"The driver of a northbound train informed us at around 10 p.m. Sunday night that he had seen a Formosan black bear with a V-shape mark on its chest while passing the Haiduan Bridge," said Fan Chih-kuan, head of the county's Kuanshan police branch office, on Monday.

The precinct immediately sent officers and firefighters to comb the area in question, Fan said, adding that footprints and vomit suspected of being left by a Formosan black bear were spotted in the area.

According to Fan, the driver of a southbound Tze-Chiang express train from Taipei informed the northbound train driver that his train seemed to have hit an unidentified animal while crossing the Haiduan Bridge located between Haiduan and Chihshang townships in eastern Taiwan.

"The Tze-Chiang train driver asked me to check whether there was something on the bridge when my train traveled there...Therefore, I paid extra attention ... and sighted the bear," the northbound train driver was cited as having told Fan's office.

The driver also said the black bear seemed to have sustained leg injuries and was walking northward along the bridge.

Fan said his office received calls from four local residents between 5 p.m. and 8 p.m. Sunday prior to the accident saying they had spotted a black bear at the 205-kilometer point on the Southern Cross-Island Highway near the county's Chulai community.

"The head of the Chulai police precinct then rushed to the area and saw the 'eyes of a bear in the dark,'" Fan said, adding that his office then decided to inform Haiduan and Chihshang residents to heighten their state of alert.

Meanwhile, Lin Kun-tze, the owner of a bee house in Haiduan Township, said Monday that five beehives at his apiary were found to have been overturned overnight, with one being split open. "Bees and pupas inside the split hive seemed to have been chewed," Lin said.

Scratch marks were also found on the bark of a plant, leading Lin to speculate that the bear paid his facility a visit in search of food after being hit by the train.

"I'm afraid that the animal is still in the vicinity," said Lin who left the apiary along with his employees for their personal safety.

Hwang Mei-hsiu, an associate professer at the National Pingtung University of Science and Technology's Institute of Wildlife Conservation, confirmed that the footprints shown in photos provided by the Kuanshan police office were likely left by a Formosan black bear.

"The bear might have lost its way after leaving its natural mountain habitat to find food," said Hwang, widely known as the "mother of the Formosan black bear" for her determined efforts to protect and conserve the endangered indigenous animal species.

She also identified the "vomit" shown in the photo as animal feces.

According to Hwang, the mountain range within 10 kilometers from where the black bear was spotted Sunday is a major habitat of the species.

"The appearance of a black bear in a low-lying area might be a sign of increasing human interference and dwindling sources of food in mountain regions," said Hwang, who hoped the missing animal could be located as soon as possible to receive treatment.

Hwang advised local residents not to panic over the possible presence of a black bear in their vicinity because the animal would not attack humans without being agitated.

"People just need to stay calm and quietly leave the scene if they encounter a Formosan black bear," Hwang said.

But she also warned people not to try to catch the bear because such a move could provoke it.