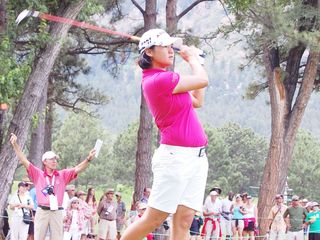 If any tournament has given the world No. 1 woman golfer Yani Tseng the most despair, it has been, and is, the 2011 U.S. Women's Open.

Finishing her four rounds at this year's contest, which was played on and off due to storms starting July 5, Tseng shot a total six over par and tied in 17th place at the end of Sunday.

Although the tournament is not over yet, it is almost certain that Tseng will not make the top 10 on the leaderboard.

She shot three birdies en route to a score of 33 on the front nine of the final round. For a short time, she was within striking distance of second place, at three shots behind, and five off the lead.

But she fell back on the back nine and finished at 6 over and in 17th place in current standings.

Playing 72 holes in two days, the 22-year-old Taiwanese golfer said she found it really difficult to gauge distances on the high-altitude Broadmoor Course in Colorado Springs, where the air is thinner than she is used to.

"I will have to hone in my putting," said Tseng, who gave herself an abysmal grade of 59 after finishing the rain-soaked tournament, with 100 being the perfect game.

Her quest for a career grand slam will wait another year, but the week was not void of value for Tseng.

"I learned lots of things from this week, you know, like being patient," she said.

Trouble began for Tseng on her first day, when she shot a total three over-par to tie for 31st after the opening round and through 16 holes in the second round. She squeezed in her first 34 holes on Friday because the tournament started a day late due to a weather delay.

But then, play was halted again by rain. She admitted Friday that her inaccurate putting and distance estimates in the opening and second rounds did her in.

Her 10-shot victory at the first major of the year, the Wegmans LPGA Championship in late June, cemented her status as the world's top female golfer and drew comparisons with Tiger Woods in his prime.

Tseng's disappointing U.S. Open finish should not affect her No. 1 ranking in the world.