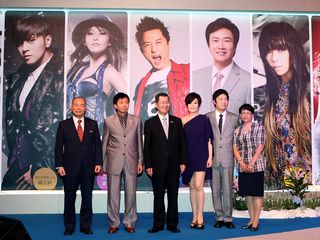 Some of Taiwan's most famous singers, including Judy Chiang, Fei Yu-ching, and A-mei, will take the stage at a concert in November to celebrate the Republic of China's centennial, the Council for Cultural Affairs (CCA) announced Monday.

The centenary concert, which will last four hours long, will take place at Kaohsiung National Stadium on Nov. 12.

An all-star line-up will perform during the event. In addition to the three famous singers, Elva Hsiao, Harlem Yu, Show Luo and rock band Soda Green will go on stage to dazzle the audience.

CCA Minister Emile Sheng said at a press conference that bringing all the pop singers in the concert on Nov. 12 has its symbolic meaning.

"In our heart, Dr. Sun Yat-sen is not only a revolutionist, but he is also a dreamer. We'd like to tell the younger generation to dare to dream, and make their dreams come true," the minister said.

Nov. 12 is the birthday of ROC founder Sun Yat-sen.

Vice President Vincent Siew said music is one of the most important parts of Taiwan's soft power, and it represents the diversity, creativity and values of Taiwanese society.

The Kaohsiung National Stadium, formerly known as Kaohsiung Arena, has a seating capacity of 36,000. The CCA said economically disadvantaged families are entitled to buy tickets at a 50 percent discount. The ministry also plans to provide 5,000 free tickets for low-income fans who apply early.

Tickets for the concert go on sale on July 13.