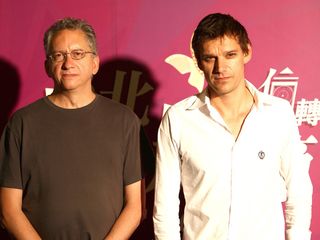 It is not an overstatement to say French filmmaker Franck Guerin is crazy about Taipei.

The 38-year-old first visited Taipei in 2006 with his debut feature "A Summer Day." Five years later, he came back to promote his second feature "One O One," a 90-minute film that is half set in Taipei and half in a mountain village in France.

"I can't really explain it. I fell in love with Taipei the first time I was here, and I felt it was a promise to come back and shoot here," Guerin told reporters Monday in an interview.

He said he was surprised to find that Taipei can be very crowded but very peaceful at the same time.

"One can stay at the city for a very long time, and yet does not feel like time is passing by," he said.

Guerin said he has traveled to many countries in Southeast Asia, but he is most impressed by Taipei. After returning to France, he had the idea of shooting a film in Taiwan's capital.

He used Facebook to recruit a Taiwanese film crew and found the ideal female protagonist for the movie -- actress Wang Hsiao-han.

"Wang is a great actress. She is so involved in the project," he said.

"One O One" is a story about a man named Abbas who searches for a young French girl that disappeared many years ago. The only clue that Abbas has for the girl is a drawing with the Taipei 101 skyscraper on it.

The film is divided into the vivid, poetic image and past memories of Abbas' life in the mountains of France, and his new encounter with a Taiwanese woman called Liang, who knows Abbas does not love her.

Several iconic landscapes of Taipei are filmed, and the first and last scene of the movie is set at Taipei Train Station.

For the film, the director said he spent 1 million euro (NT$41.1 million) and is facing a debt of 900,000 euro at the moment. He said he is very thankful for the moral support given by his investors. They have not asked him to pay back the money immediately.

The film had its world premiere at the Taipei Film Festival on July 8, and is expected to be released in France around January or February in 2012. Guerin is still looking for distributors so that his film can reach a wider audience.