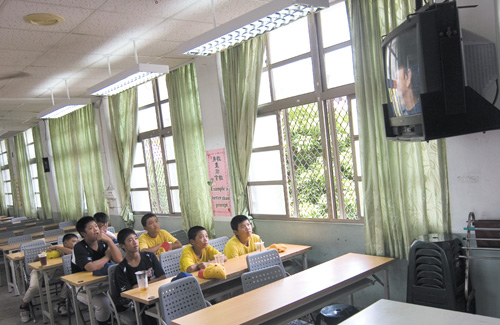 In a dimly lit Taiwanese classroom, the Chongsywe Elementary School baseball team crowded around a flickering television in the early hours of yesterday morning to watch star New York Yankees pitcher Wang Chien-ming take the mound against the hometown Seattle Mariners.
Wang is Chongsywe's most famous alumnus, a certified fireballer who has mesmerized this island of 23 million people with his electrifying sinker, his pinpoint fastball and his 14-5 winning record, playing for one of the most storied franchises in all professional sports.
Local television broadcasts his pitching starts live - usually early in the morning - cable news stations show endless reruns of his most heroic moments, and Chinese language newspapers describe his exploits with lavish superlatives.
Nowhere is the adulation more intense than at Chongsywe, a large complex of stolid looking classrooms and expansive playing fields where a life-size size statue of a Taiwanese baseball player dominates the main courtyard.
Twelve year old pitcher Nien Wen-fang explains what it means to have Wang as a role model.
"I absolutely idolize him," he says. "I want to be just like him."
Nien and other members of the Chongsywe team practice five days a week, two hours a day under the watchful eye of coach Liu Yong-song, a personable 53-year-old, who has been at the school for 20 years - including the time in the late 1980s and early 1990s when Wang was on the squad.
"Wang donated the statue in the courtyard," Liu says. "He comes here during the offseason to give our players tips. He's a big presence in our program."
The Chongsywe team's designated field of dreams - the same field where Wang played a little more than 10 years ago - is a rough patch of infield dirt and un-mowed grass, notable for its lower than regulation pitcher's mound, and its invitingly short right field fence - both pitcher's nightmares.
But according to Liu, Wang wasn't phased by them.
"From the time he was in third grade I knew he had talent," he says. "But even more important was his personality - he was quiet, self-contained and he didn't horse around with other kids."
Still, Liu says, he had no idea that Wang was destined for stardom in the U.S. major leagues. "The truth is," he says, "I've coached better players."
At a spirited team practice the day before Wang's start against the Mariners, it wasn't hard to see what he was talking about.
Under a blazing summer sun, one of Liu's charges sent what looked like a sure base hit deep into the hole between third base and short, only to have 12-year-old shortstop Li Wen-jye move sharply to his left, backhand the ball with the grace of a Taiwanese Omar Vizquel, and nail the runner with a bullet of a throw.
"Li's not bad," Liu conceded. "Later this year he's going to California to represent Taiwan in a big competition."
Baseball is Taiwan's most popular sport, introduced to the island under Japanese colonial rule in the 1920s. It now features six teams competing before enthusiastic crowds in the local Chinese Professional Baseball League.
But the local league and its players have been largely supplanted by Wang, whose exploits on American diamonds have captivated the collective Taiwanese imagination. In the Chongsywe classroom, Liu and his team watched admiringly as Wang mowed down the hapless Mariners in one of his more impressive recent appearances.
He pitched seven strong innings before being replaced by Mike Myers, as the Yankees went on to win 9-2.
"Wang was pretty good today," Liu said. "And his motion - it was the same pitching motion he had here at Chongsywe. He hasn't changed a thing."