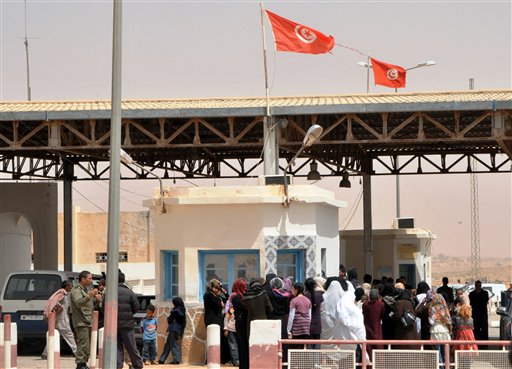 Another high-ranking Libyan official has defected and fled the country amid a widening NATO campaign of bombings as well as leafletting and other psychological warfare to persuade Moammar Gadhafi's troops to stop fighting.

Shukri Ghanem, the Libyan oil minister and head of the National Oil Co., crossed into neighboring Tunisia by road on Monday, according to a Tunisian security official and Abdel Moneim al-Houni, a former Libyan Arab League representative who was among the first wave of Libyan diplomats to defect.

The defections suggest Gadhafi's political structure is fraying, but it's unclear whether there is enough internal strife to seriously undermine his ability to fight rebel forces as NATO airstrikes pound Libyan military targets. Gadhafi appears to retain the backing of his core of military commanders.

Still, support for Gadhafi seems to be waning in the capital, Tripoli. Pro-regime demonstrations are sparsely attended, even when heavily advertised in advance.

And rebel forces have reported some gains in recent days. In Misrata, the main battleground in western Libya, opposition fighters claim they have driven back government troops from key access points and tried to push pro-Gadhafi gunners out of rocket range for the city.

NATO said Tuesday it would step up psychological warfare operations to try to persuade troops loyal to Gadhafi to abandon the fight.

Wing Cmdr. Mike Bracken, speaking in Naples, Italy, said NATO planes have been dropping leaflets and broadcasting messages to Libyan forces urging them "to return to their barracks and homes."

Bracken said the messages also have advised pro-regime troops "to move away from any military equipment" that could be targeted by NATO's strike aircraft.

He did not provide further details on the psychological operations. But the U.S. has been using a specially modified Air Force C-130 transport to broadcast messages to Libyan forces in AM, FM, high-frequency radio, TV and military communications bands.

NATO is operating under a U.N. Security Council mandate to maintain a no-fly zone and to take other actions to protect civilians from attack by Gadhafi's forces. In recent days, NATO attacks have concentrated on military and logistics hubs in Tripoli.

On Monday night, British aircraft bombed the intelligence agency building in the capital as well as a training base for bodyguards protecting members of Gadhafi's regime, according to Britain's Ministry of Defense.

Maj. Gen. John Lorimer said the targets were "at the heart of the apparatus used by the regime to brutalize the civilian population."

One of the buildings hit overnight was used by the Interior Ministry, which is responsible for internal security. Another building belonging to an anti-corruption commission was also bombed. Libyan government spokesman Moussa Ibrahim suggested that the ministry was targeted because it contained files on corruption cases against senior members of the Benghazi-based rebel leadership.

The International Committee of the Red Cross said Tuesday that fighting in Misrata and other cities is denying medical aid to civilians and causing casualties among health personnel. It cited reports by the Libyan Red Crescent that three of its ambulances were hit over the past four days. A nurse was killed and a patient and three volunteers were wounded, it said.

Gadhafi, who has ruled Libya for more than 40 years, has been using his military and militias to try to put down an uprising that began in February. The protests are aimed at ousting him from power.

Although Gadhafi appears from time to time on state-run television and radio, his whereabouts are a mystery.

"We do not know where Gadhafi is," said Italian Foreign Minister Franco Fattini, meeting Tuesday in Rome with Nabil Elaraby, the new secretary-general of the Arab League. "We heard some rumors about Gadhafi leaving Tripoli, taking refuge outside of the city, but we had no confirmation at all."

Government officials were not immediately available to comment on the oil minister's defection. Ghanem is one of the most prominent members of Gadhafi's government to abandon the regime.

Others who have defected include Foreign Minister Moussa Koussa, one of Gadhafi's earliest supporters; Interior Minister Abdel-Fatah Younes; Justice Minister Mustafa Abdul-Jalil, and Ali Abdessalam Treki, a former U.N. General Assembly president. A number of ambassadors and other diplomats also have resigned.

Ghanem had been at odds with the Gadhafi regime, losing his post for a while in 2009 as two of Gadhafi's sons differed over the direction the country should take in reforming its political and economic systems. His resignation was seen, at least in part, as linked to the creation of a new superstructure governing the nation's oil sector, with the new agency designed to replace one he supported.

He previously served as prime minister for about three years at a time when Libya was emerging from under the cloud of more than a decade of international sanctions.

Fighting between Gadhafi's forces and rebels spilled over the Tunisian border Tuesday when several mortars fell on the Tunisian side of the Wazen crossing, the Tunisian news agency TAP said. Tunisia's air force scrambled jet fighters to fly over the border area.

Melissa Fleming, a spokeswoman for the U.N. High Commissioner for Refugees, told reporters in Geneva that the Libyan conflict has opened up a route for migrants that was closed for two years because of an agreement between Libya and Italy.

Already some 14,000 people — mostly from sub-Saharan Africa — have used Libya as a springboard to reach Europe, and thousands more are poised to make the treacherous sea journey in the coming weeks as weather conditions in the Mediterranean improve.

"The authorities (in Libya) are not discouraging, at all, in fact there may be signs that they are encouraging these boat journeys," she said.

Some are migrants fleeing the fighting in Libya, but others appear to be crossing into Libya from elsewhere in Africa because it is easier to get onto smugglers' boats there.

Meanwhile, Libya said four journalists detained since early April have completed an administrative hearing and will be released Tuesday or Wednesday.

Ibrahim, the government spokesman, said the journalists include James Foley, who had been covering the conflict in Libya for the Boston-based news agency GlobalPost, and Clare Morgana Gillis, a freelance journalist who wrote for The Atlantic and USA Today.

He also named Manu Brabo, a Spanish journalist picked up with Foley and Gillis on April 5 near the town of Brega.

It was not immediately clear who the fourth journalist was. Photojournalist Anton Hammerl, who has South African and Austrian citizenships, went missing in Libya about the time the others were detained.

Jane Gillis of New Haven, Connecticut, said Tuesday that she had not heard anything about her daughter's release beyond news reports. She said there had been many ups and downs in the case and she was holding off on any celebration.

"It's not really a done deal until they're out," she said. "We're very hopeful, but we're still waiting and hope that all the news stories are true."