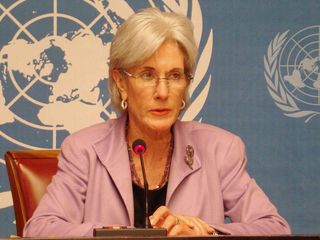 Geneva, May 17 (CNA) U.S. Secretary of Health and Human Resources Kathleen Sebelius said Tuesday that no organization of the United Nations has a right to unilaterally determine Taiwan's status.

Sebelius' remarks came amid recent controversy over Taiwan's designation in the World Health Organization (WHO).

It was revealed last week that a letter from WHO Director-General Margaret Chan, sent last September, asked its recipients to refer to Taiwan as "Taiwan, province of China" instead of "Chinese Taipei."

During a news conference hosted by Sebelius on the sidelines of the 2011 World Health Assembly (WHA) -- the WHO's governing body -- a CNA reporter asked whether Taiwan would continue to encounter designation issues as it has faced in the WHO.

In response, Sebelius said: "We have made it very clear to the WHO and I think the United States' position is that no organization of the U.N. has a right to unilaterally determine the position of Taiwan."

"It needs to be a resolution that includes China and Taiwan in a discussion and we would very much welcome that road forward, " she added.

She also reaffirmed U.S. support for Taiwan's participation in WHO activities, saying: "The United States was certainly pleased to support the efforts to give Taiwan an observer status in 2009 and welcomes the engagement of Taiwan."

Sebelius held bilateral talks with Taiwan's Health Minister Chiu Wen-ta a day earlier on the opening day of the 64th WHA, which will run until May 24.

Before the start of their closed-door meeting, journalists were allowed to take pictures of them getting together in an amicable atmosphere.

It marked the first time since Taiwan became a WHA observer three years ago that health ministers from the two countries have been photographed together in public at the WHA venue.

Also that day, Chiu handed a strongly worded letter of protest to WHO legal counsel Gian Luca Burci over the "province of China" reference.

In his protest, Chiu said the WHO's error in using a denigrating title to refer to Taiwan is "absolutely unacceptable" and requested that the world health regulatory body "immediately look into this grave matter and redress such a mistake."

Chiu was scheduled to deliver a brief speech at a WHA technical session later Tuesday. He will also speak at other WHA meetings as well as hold bilateral talks on the sidelines with health ministers of countries that do not maintain diplomatic ties with Taiwan.