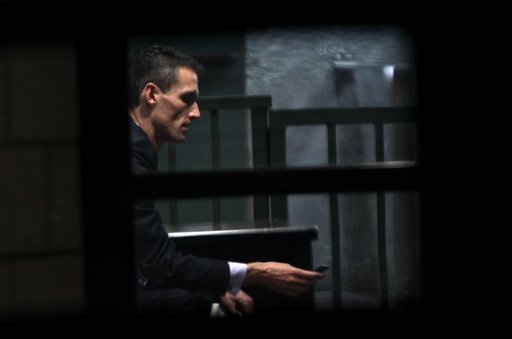 The head of the International Monetary Fund must remain jailed at least until Friday, the day of his next court hearing for attempted rape and other charges, a judge ruled Monday.

A haggard, unshaven and grim-looking Dominique Strauss-Kahn, his forehead furrowed beneath a slash of silver hair, made his first court appearance in the sex-assault case. Appearing before the Manhattan judge Monday, he slumped at the defense table in a dark raincoat and open-collared shirt.

Strauss-Kahn is accused of attacking a maid who went in to clean his penthouse suite Saturday at a luxury hotel near Times Square. He is charged with attempted rape, sex abuse, a criminal sex act, unlawful imprisonment and forcible touching. The top count is punishable by five to 25 years in prison.

"This battle has just begun," defense attorney Benjamin Brafman told scores of reporters gathered outside the courthouse. "Mr. Strauss-Kahn is innocent of these charges."

Manhattan prosecutors asked the judge to hold Strauss-Kahn without bail, saying his position as IMF head had taken him out of the country previously and that the IMF leader was wealthy and doesn't live in New York.

"He has almost no incentive to stay in this country and every incentive to leave," Assistant District Attorney John A. McConnell said. "If he went to France, we would have no legal mechanism to guarantee his return to this country."

Defense attorneys had suggested bail be set at $1 million and promised the IMF managing director would remain in New York City.

The 32-year-old maid told authorities that when she entered his spacious, $3,000-a-night suite early Saturday afternoon, she thought it was unoccupied. Instead, Strauss-Kahn emerged from the bathroom naked, chased her down a hallway and pulled her into a bedroom, where he sexually assaulted her, New York Police Department spokesman Paul J. Browne said.

The woman told police she fought him off, but then he dragged her into the bathroom, where he forced her to perform oral sex on him and tried to remove her pantyhose. The woman was able to break free again, escaped the room and told hotel staff what had happened, authorities said.

Strauss-Kahn was gone by the time detectives arrived moments later. He left his cellphone behind.

The NYPD discovered he was at John F. Kennedy International Airport and contacted officials at the Port Authority of New York and New Jersey, which runs the airport. Port Authority police officers arrested him.

The maid was taken by police to a hospital and was treated for minor injuries.

Meanwhile, the lawyer for a 31-year-old French novelist said she was likely to file a criminal complaint accusing Strauss-Kahn of sexually assaulting her nine years ago.

A rival lawmaker also alleged, without offering evidence, that the potential French Socialist presidential candidate had victimized several maids during past stays at the luxury Sofitel hotel near Times Square.

McConnell, the prosecutor, said in court Monday that New York authorities are investigating at least one other case of "conduct similar to the conduct alleged" at the Sofitel.

French viewers were stunned by the weekend images of the handcuffed Strauss-Kahn ducking stone-faced into a police car. In France, public figures are usually shielded from view in such circumstances.

The chief of Sarkozy's conservative party, Jean-Francois Cope, said he told the president that he asked fellow party members to "proceed with caution and restraint" in their comments, and Sarkozy supported the idea.

In addition to the allegations involving the hotel maid, Environment Minister Nathalie Kosciusko-Morizet lamented that there is a "clear victim, which is France."