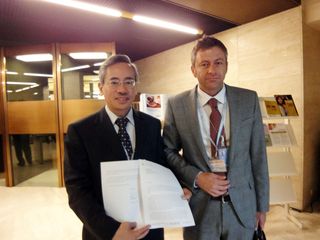 Taiwan's Health Minister Chiu Wen-ta said he filed a protest Monday with the World Health Organization (WHO) for downgrading Taiwan's status by using an incorrect name for the country in an internal WHO document.

In a telephone interview Monday night Taipei time, Chiu said he submitted the letter to Gian Luca Burci, the legal counsel of the WHO, at 11: 30 a.m. local time with six representatives of Taiwan's diplomatic allies looking on.

The minister was accompanied by representatives from Gambia, Nauru, Nicaragua, Swaziland, Panama, and Palau when he met Burci, the person designated by the WHO Secretariat to receive the three-page letter of protest.

Although he would not reveal the content of the letter, Chiu told the local media that the tone was "strong." Chiu said he had also protested directly to Burci, who promised to pass the letter to Margaret Chan, the WHO secretary-general.

He cited Burci as saying that Taiwan has performed remarkably well in the past WHA sessions and he hoped to see more of Taiwan in the upcoming events.

Chiu was protesting a letter issued by the WHO secretary-general's office in September 2010 that instructed its various agencies to use "the Taiwan province of China" whenever referring to Taiwan.

In an earlier press conference with foreign media in Geneva, Chiu called on the WHO to adopt "a fair, sensible, reasonable, and farsighted attitude, and stop using the false terms "Taiwan Province of China" or "Taiwan, China."

The inaccurate designation had created confusion and misunderstanding among WHO staff, Chiu said, and he urged the international body to end the inconsistency by using "only one name" -- Chinese Taipei -- in all of its documents, internal or external. (By Nancy Liu) ENDITEM/ls
0