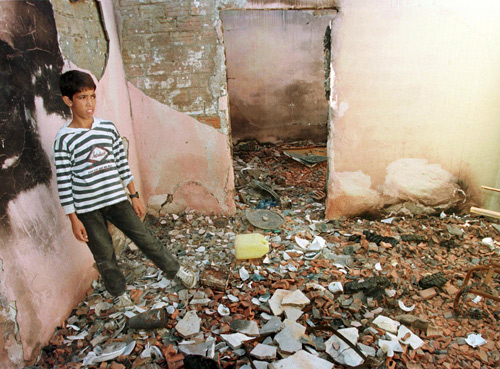 You can still find signs of the killings that, briefly, made this Algerian town infamous.
In an alleyway, burn marks and bullet holes scar walls of breeze blocks and flaking cement. Entire murdered families lie in a nearby cemetery, grandmothers beside sons and granddaughters.
But nine years after attackers slaughtered 300 men, women, children and toddlers in a four-and-a-half hour rampage, what is harder to uncover today in Rais is any expectation of justice.
Like shattered communities all over this north African country, the residents of the forlorn settlement on the plains south of Algiers feel a judicial reckoning of the country's years of conflict lies far beyond their grasp.
"Rais is a forgotten place," said unemployed Bouteldja Khaiter, nursing a cup of coffee at a roadside stall.
"There is simply nothing here, no job, no entertainment, no sports ... nothing, nothing. It is a sad place with sad people."
Days ahead of the expiry of an amnesty for Islamist rebels and a hoped-for turning of the page on a brutal past, Algeria's mood is more despondent than hopeful as it looks to the future.
Security has improved sharply since the height of an Islamist revolt when more than 27,000 rebels roamed the country.
The violence broke out in 1992 when the authorities canceled elections radical Islamists were poised to win. The government had feared an Iranian-style revolution.
About 2,200 Islamist ex-fighters have been freed from prison under the six-month amnesty aimed at reconciling a nation whose stability is crucial for security in the Mediterranean region.
The amnesty, which began on February 28, also gives those guerrillas still fighting six months to surrender and be pardoned provided they did not commit massacres, rapes or bombings of public places.
Officials say up to 300 of an estimated 800 Islamist militants still fighting have given themselves up.
But instead of mandating South African-style disclosure and truth-telling about the bloodshed, Algeria's reconciliation plan in effect orders silence: it bars public criticism of any participant in the conflict for their actions.
Officials say emotions are still too raw for the country to withstand a public accounting. Many Algerians say they agree.
The plan also bars prosecutions of members of the security forces for any wrongdoing committed during the conflict that killed 150,000 to 200,000 people, mostly civilians.
In Rais, no one these days expects a detailed accounting of the attack, blamed by officials on the ruthless Armed Islamic Group (GIA), which was fighting to establish an Islamic state.
After the raid, the killers vanished into nearby orchards.
"Regarding what happened during that night, it is hard to forget. We are still wounded," Khaiter said.
But he added with a smile: "If you want to know the truth, you can end up dead."
For the moment, jobs are more important than justice in Algeria's former "Triangle of Death" - the zone including Rais that was rated the most violent during the years of conflict.
So vacant are Khaiter's days and so meagre his resources, he brings his cup of coffee from home and sips it at the roadside cafe, drawing comfort from the illusion of prosperity.
What worsens his frustration is the knowledge that the government has amassed riches from the oil and gas its state-owned energy firm exports around the world. Officials say more jobs can only come from an expanded private sector and from liberalising the economy.
Khaiter's friend, Drich Mohamed, also jobless, cannot understand why the wealth has not yet trickled down.
"We are not living but surviving," he said. "We spend most of our time here selling clothing and stuff in neighboring markets as we don't have any market here."
A Rais shop owner who declined to give his name said it was clear that security had improved but it was not enough.
"We can chat with friends later on in the night. This is a positive part of the reconciliation policy. But our problem here, and maybe all over the country, is to give hope to the youth. So far, there is still nothing concrete."
Officials say unemployment stood at 15.3 percent in 2005, down from 17.7 percent in 2004, and 23.7 percent in 2003. Unofficially, it is believed to be at around 30 percent.
Former GIA fighters, many now free, say they want to live in peace and will use peaceful means to push for an Islamic state.
But human rights activists accuse many of the released former insurgents of behaving arrogantly, pointing out that none of the rebel leaders have apologized for killing civilians.
Several former rebel leaders have said since their release they would still like an Islamic state, and at least one has suggested that violence will not end until one is established.
In contrast Mahdi Falah, an amnestied former GIA commander, has little hesitation in admitting wrongdoing. Living with his wife and two sons in a two-bedroomed house in the coastal Ain Taya district east of Algiers, he is glad he chose peace.
"I regret (what I did). I regret it a lot. I hope that God will allow me to visit his house so that my sins are forgiven," he said, referring to a planned pilgrimage to the Muslim holy city of Mecca.