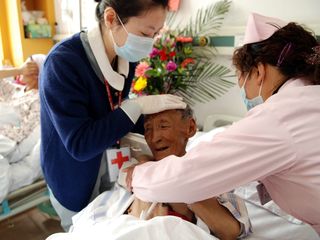 A large majority of hospitals in Taiwan are short of nursing staff, according to the results of a survey released yesterday.

The survey, which collected responses from some 100 hospital managers in Taiwan over the past week, showed that close to 90 percent of hospitals are finding it difficult to recruit nurses.

Lu said that the shortage of nurses has been especially serious this year and has led to the closing of wards at some hospitals.

Citing the findings of a survey of more than 1,000 nurses last year, Lu said that low pay, heavy workload and high pressure are the main reasons for the high turnover rate among nurses. Only 17 percent of the respondents said they were willing to stay in their jobs for the next three years, Lu said.

In some Taiwan hospitals, nurses on night shifts can be assigned up to 20-30 patients, five times the number of patients assigned to their European or U.S. counterparts, she said.

Meanwhile, the results of a hospital evaluation released Wednesday by the Taiwan Healthcare Reform Foundation (THRF) confirmed that Taiwan nurses are under heavy stress.

The THRF said that despite better profits at hospitals and an annual 3 percent increase in the national health care budget, hospitals have continued to impose a heavy workload and long overtime hours on their nurses.

The stressful working environment has apparently forced many nurses to consider a career change.

According to the Taipei Nurses Association, some nurses have quit their jobs to become flight attendants, while others have sought opportunities in the service industry.

Department of Health (DOH) statistics show that less than 60 percent of certified nurses are currently working in their professions.

In an effort to resolve the shortage of nurses and improve the working conditions, the DOH said that in its assessments it will give a failing grade to hospitals that hire fewer nurses than are needed.