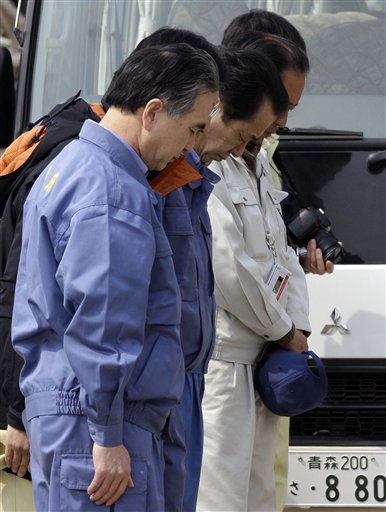 Japan's prime minister laid eyes on the extensive damage in the northeast for the first time Saturday as troops trolled the decimated coastline in an all-out search for any remaining bodies swept out to sea by a tsunami three weeks ago.

More than 16,000 people are still missing after the disaster, which officials fear may have killed some 25,000 people. The magnitude-9.0 earthquake and ensuing tsunami also ravaged a nuclear power plant.

But Saturday marked his first visit to some of the dozens of villages, towns and cities wiped out in the March 11 disaster. Dressed in the blue work clothes that have become almost a uniform for officials, Kan stopped first in Rikuzentakata — a town of about 20,000 people that was flattened by the torrent of water.

The town hall still stands, but all its windows are blown out and a tangle of metal and other debris is piled in front of it. The prime minister paused in front of the building for a minute of silence.

"It is going to be a long haul, but the government is with you. We all should hang in there," Kan told firefighters and officials, according to the Kyodo news agency.

About 90 miles (150 kilometers) down the coast, near the Japanese military's Kasuminome air base, a constant stream of helicopters roared overhead throughout Friday afternoon, shuttling to and from the more remote coastal regions. Planes and boats were dispatched from other bases near the city.

Altogether, 25,000 troops, 120 helicopters and 65 ships from the Japanese and U.S. militaries will continue searching through Sunday. So far, more than 11,700 deaths have been confirmed.

"Unfortunately, we've come across remains over the scope of our mission, so it may be more likely than you think" to find bodies at sea so long after the disaster, said U.S. Navy Lt. Anthony Falvo.

Some may have sunk and just now be resurfacing. Others may never be found. After the 2004 Indian Ocean tsunami, 37,000 of the 164,000 people who died in Indonesia simply disappeared, their bodies presumably washed out to sea.

The Japanese military stopped short of saying the search would end for good after Sunday, but public affairs official Yoshiyuki Kotake said activities will be limited. The search includes places that were submerged or remain underwater, along with the mouths of major rivers and the ocean as far as 12 miles (20 kilometers) from shore.

Police officers have also been searching for bodies in decimated towns inland, but in some cases their efforts have been complicated or even stymied by dangerous levels of radiation from the nuclear plant, which is 140 miles (220 kilometers) northeast of Tokyo.

People who live within 12 miles (20 kilometers) have been forced to leave, though residents are growing increasingly frustrated and have been sneaking back to check on their homes. Government officials warned Friday that there were no plans to lift the evacuation order anytime soon.

"I don't think the evacuation zones make any sense," said Tadayuki Matsumoto, a 46-year-old construction worker who lives in a zone 15 miles (25 kilometers) away where residents have been advised to stay indoors. "They don't seem to have thought it out and are making things up as they go along."

Radiation concerns have rattled the Japanese public, already struggling to return to normal life after the earthquake-generated tsunami pulverized hundreds of miles (kilometers) of the northeastern coast. Three weeks after the disaster in one of the most connected countries in the world, 260,000 households still do not have running water and 170,000 do not have electricity.

Officials at the International Atomic Energy Agency in Vienna said Friday that the U.N. nuclear watchdog was sending two reactor specialists to Japan to get firsthand information. They will meet experts in Tokyo and may go to the Fukushima site.

In a positive turn, though, officials said samples from Iitate — about 25 miles (40 kilometers) from the Fukushima complex — show that radiation levels are decreasing. Earlier in the week they were substantially higher than levels at which it would recommend evacuations.

TEPCO has repeatedly made mistakes in analyzing radiation levels, and the Nuclear and Industrial Safety Agency said it might eventually order a complete review of all radiation data collected since the tsunami.

Though the size of recent leaks is unclear, it appears radiation is still streaming out of the plant, underscoring TEPCO's inability to get it under control.

The company has increasingly asked for international help, most recently ordering giant pumps from the U.S. that will arrive later this month to spray water on the reactors.

The prime minister said in a televised news conference Friday that Japan will do whatever it takes to win the battle at Fukushima Dai-ichi, though he warned that it could be a long process.

"I promise to overcome this problem and regain a society where we can live with peace of mind," said Kan.

Some cities are already helping their own residents. In hard-hit Natori, next to Sendai, dozens lined up to apply for funds as aircraft searching for bodies zoomed overhead.

Many people lost all of their possessions, including IDs, so the city has created software that compares neighborhoods before and after the tsunami. People point out where they lived, and if the house in that location has been destroyed, they are eligible for 100,000 yen ($1,200) in assistance.

"We have records of everyone that lived there, and so we can confirm identities by asking birthdays and other information," said Takeshi Shibuya, an official at city hall.

Some applying for the funds, like 33-year-old Osamu Sato, said it would be hardly be enough. He and his pregnant wife bought their apartment and moved in six months before the tsunami destroyed it, plus all of their new furniture and electronics.