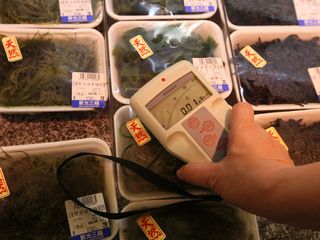 Taipei will screen foods imported from Japan for radiation contamination at local stores on a daily basis, said the city's Bureau of Health yesterday.

The bureau will deploy inspectors daily to supermarkets, traditional markets and stores effective Friday to check for food contamination and will disclose the results on its website, said Chiang Yu-mei, director of the Taipei Health Department's food and drug division.

Officials from the bureau went to a supermarket at the Xin-Yi district, Taipei, earlier in the day and detected 0.05 microsieverts (μSv) of radiation on Japanese Aomori apples, 0.01μSv on cabbage, and 0.02μSv on rice crackers, which all fall within the acceptable standard of 0.05-0.2μSv, the bureau said.

As of Thursday, Taiwan's Atomic Energy Council has scanned a total of 549 items produced after the March 11 earthquake in Japan, none of which have been found with radiation levels outside the normal range, the bureau said.

Meanwhile, the screening of imported Japanese food in the wholesale market will be handled by state-funded Taipei Fishery Marketing Corp. and the Taipei Agricultural Products Marketing Corp., said the bureau.

Ding Juo-ting, director of Taipei City's Market Management Office, said it will monitor the data published by the government on food contamination.

All the items found with higher-than-normal radiation levels will not be sold at the wholesale market, Ding said.

Still, if any fruits and vegetables register radioactive iodine-131, the bureau recommended the public wash them with clean water before eating or to freeze that product and consume it only after the radioactive element has passed its half-life period of eight days.