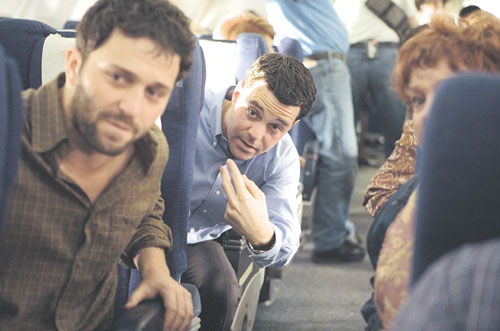 It's the first blush of light on the morning that changes everything, and al-Qaida suicide pilot Ziad Jarrah is sitting quietly in his hotel room reciting from the Koran.
As the city bubbles to life outside, a fellow hijacker shaves his chest in the bathroom mirror.
Two hijackers rock on embroidered rugs pointed toward Mecca while an ominous drum beats a slow, booming pulse. They are saying their morning prayers for the last time.
This is the chilling opening sequence for "United 93," and it quickly warns viewers that the events of 9-11 are unfolding in real time and heading toward the very heart of evil.
The New York Daily News got a sneak peek last week at the Universal Studios movie, which goes into wide release April 28 with an ensemble cast of unknown actors.
In 90 minutes, director Paul Greengrass reconstructs the violent, unspeakable horror onboard the fourth hijacked plane - and how the 33 passengers and seven crew members summoned astonishing courage when it mattered most.
It's an emotionally draining film that some might shun while others question the need for such detailed yet improvised devotion to a day of blood-soaked terror and loss.
But Greengrass is unapologetic.
"One of the reasons why 'United 93' exerts such a powerful hold on our imaginations is precisely because we don't know exactly what happened," Greengrass says in press materials for the film.
"Who among us doesn't think about that day," he asks, "and wonder how it must have been and how we might have reacted?"
It's a question no doubt moviegoers will be asking after seeing this exercise in courage and heartbreak.
Armed with hot water, forks and the knowledge they'd become unwilling pawns in a suicide mission, the heroes of United 93 bravely rushed the cockpit and caused Jarrah to crash the fuel-heavy Boeing 757 in a deserted Pennsylvania field.
The unflinching portrayal of the utter chaos unleashed that day and the heart-wrenching last calls that passengers made to loved ones guarantees there will be few dry eyes.
"Jack, are you there? Wake up, sweetie," a desperate female passenger pleads into her Verizon Airfone after the terrorists stab and kill the two pilots, a flight attendant and a passenger. "I just love you more than anything. Know that."
Not willing to give up, flight attendant Sandra Bradshaw makes a promise to her husband she cannot keep.
"I promise you, if I get home safe, I'll quit tomorrow. I'll quit tomorrow. I promise I'll quit tomorrow," she sobs into her phone.
These scenes - recreated with heavy improvisation and very little scripted dialogue - are agonizing but riveting.
The filmmakers' say their goal is to pay tribute to the ordinary people who boarded United 93 at Newark Airport that bright morning of September 11, 2001, and sacrificed their lives to spare others.
"They are not going to land this plane. They are not gonna take us back to the airport," implores passenger Thomas Burnett after he learns of the World Trade Center and Pentagon attacks in a call to his wife.
"There's a lot of us, we have to do something," another passenger agrees.
"Stewardess, listen to me. Are you listening?" Burnett, 38, commands. "Go back in (the galley), and get every weapon you can. Get whatever we can use as a weapon."
As the passengers courageously plot their revolt, breakneck cuts to scenes at airport control towers, the Federal Aviation Administration's Virginia command center and a military bunker show how the same events left so many of us on the ground shaken and overwhelmed with grief.
In the last 10 minutes of the film, the passengers valiantly rush up the center aisle toward a hijacker with an alleged bomb strapped to his torso. They pull him down, fight off a second hijacker and use a drink cart to break down the cockpit door.
The last few scenes depict terrifying pandemonium as bloody passengers try to regain control of the plunging plane. A determined Jarrah rolls it toward the fast-approaching earth yelling, "Allah is the greatest."
The screen goes black.