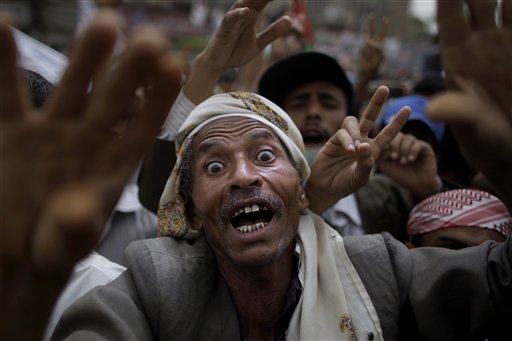 Yemen's president, clinging to power despite weeks of protests, scrapped an offer to step down by year's end yesterday, as Islamic militants taking advantage of the deteriorating security took control of another southern town.

Opponents of President Ali Abdullah Saleh — a group that started with university students and has expanded to include defecting military commanders, politicians, diplomats and even Saleh's own tribe — had immediately rejected his offer a week ago to leave by the end of this year. Its formal withdrawal by the president indicates an attempt by both sides to negotiate a transfer of power to end the crisis has failed.

In a sign of what is at stake in Yemen if security further unwinds, Islamic militants seized control of a small weapons factory, a strategic mountain and a nearby town in the southern province of Abyan, said a witness and security officials.

A day earlier, militants believed to belong to Yemen's active al-Qaida offshoot swept into another small town in the area called Jaar. In both cases, the militants moved in with no resistance because police had withdrawn weeks earlier — as they did in several other parts of the country — in the face of challenges by anti-government protesters.

Saleh is a key ally of the United States in battling al-Qaida in the Arabian Peninsula, which the Obama administration considers the top terrorist threat to the U.S.

Washington is concerned that the cooperation could be imperiled if Saleh departs, and U.S. diplomats sat in on the political talks last week that failed to make progress on a possible transition of power.

"We have had a lot of counterterrorism cooperation from President Saleh and Yemeni security services. So if that government collapses or is replaced by one that is dramatically more weak, then I think we'll face some additional challenges out of Yemen," said U.S. Defense Secretary Robert Gates on ABC TV's "This Week." ''There's no question about it. It's a real problem."

Saleh himself warned that "Yemen is a ticking bomb" in a TV interview on Saturday night and said that without him in power, the country would descend into civil war.

The protesters behind weeks of demonstrations are demanding Saleh step down immediately and want a ban on future government positions for him and his family. For 32 years he has ruled over Yemen, an impoverished and deeply divided country stitched together by fragile tribal alliances.

Yemen is the poorest nation in the Arab world, is rapidly running out of water resources and oil and is buffeted by conflicts that include an on-and-off rebellion in the north and a secessionist movement in the south.

The protesters complain of corruption and the lack of jobs and political freedom. Their ranks swelled as many of the president's allies abandoned him over an escalating crackdown that has killed 92 protesters, according to the Shiqayiq Forum for Human Rights.

More than 40 of them were killed in a single day, as snipers firing from rooftops methodically picked off people in the main protest square in the capital, Sanaa, on March 18.

A party statement released afterward said the meeting affirmed that "President Ali Abdullah Saleh should remain in his position until he finishes his constitutional term" in 2013.

The delegates also reasserted that dialogue is the only way to end the crisis and ensure a peaceful transition of power.

Just days earlier, Saleh had pledged in a meeting with senior officials, military commanders and tribal leaders that he would step down by the end of the year. But that offer was quickly rejected by opposition leaders who dismissed it as a political maneuver.

In the south, Islamic militants who have battled Saleh's government were trying to make gains on the turmoil. On Sunday, militants set up checkpoints around an old factory making bullets for Kalashnikov assault rifles and did the same in the town of al-Husn, where they patrolled the streets and searched cars, said resident Wahib Abdul-Qader.

The fighters were not from the al-Qaida offshoot, but one of the many other militant groups roaming southern Yemen called the Salafi Jihad.

They also seized control of the nearby Khanfar Mountain, where a radio station and a presidential guest house are located, said Ali Dahmash, an expert on Islamic militant groups who lives nearby.

A day earlier, residents in the nearby small town of Jaar said militants suspected of belonging to the al-Qaida offshoot seized that area.

Al-Qaida has seized control of towns in southern Yemen before, but in the past was vigorously confronted by Saleh's security forces.

In the central Marib province, suspected al-Qaida gunmen killed seven soldiers and wounded seven others in an attack on a military post on Sunday, security officials said. Marib is one of several provinces where the militant group is active and only under nominal government control.

The officials, speaking on condition of anonymity because they are not authorized to brief the media, said the attackers set fire to a pickup truck mounted with a machine gun and made off with an armored vehicle belonging to the post.