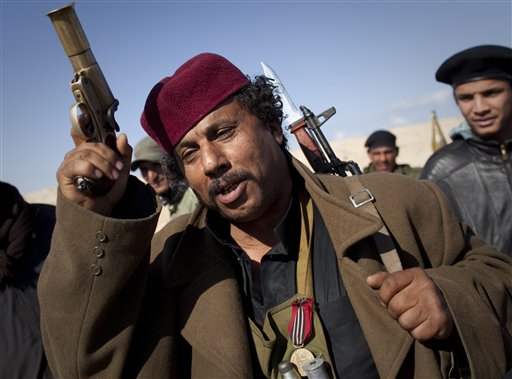 Moammar Gadhafi's snipers and tanks are terrorizing civilians in the coastal city of Misrata, a resident said, and the U.S. military warned Tuesday it was "considering all options" in response to dire conditions there that have left people cowering in darkened homes and scrounging for food and rainwater.

The U.S. is days away from turning over control of the air assault on Libya to other countries, President Barack Obama said. Just how that will be accomplished remains in dispute: Obama spoke Tuesday with British Prime Minister David Cameron and French President Nicolas Sarkozy in hopes of quickly resolving the squabble over the transition.

Libyan state TV broadcast what it said was live coverage of Gadhafi's less-than-five-minute statement. Standing on a balcony, he denounced the coalition bombing attacks on his forces.

"O great Libyan people, you have to live now, this time of glory, this is a time of glory that we are living," he said.

State TV said Gadhafi was speaking from his Bab Al-Aziziya residential compound, the same one hit by a cruise missile Sunday night. Reporters were not allowed to enter the compound as he spoke.

Heavy anti-aircraft fire and loud explosions sounded in Tripoli after nightfall, possibly a new attack in the international air campaign that so far has focused on military targets. Two explosions were heard in the city before daybreak today.

One of Gadhafi's sons may have been killed, U.S. Secretary of State Hillary Clinton told ABC News on Tuesday. She cited unconfirmed reports and did not say which son she meant. She said the "evidence is not sufficient" to confirm this.

Clinton also told ABC that people close to Gadhafi are making contact with people abroad to explore options for the future, but she did not say that one of the options might be exile. She said they were asking, "What do we do? How do we get out of this? What happens next?"

Despite the allies' efforts to keep Gadhafi from overwhelming rebel forces trying to end his four-decade rule, conditions have deteriorated sharply the last major city the rebels hold in western Libya.

"The number of dead are too many for our hospital to handle," said the doctor, speaking on condition of anonymity for fear of reprisals if the city falls to Gadhafi's troops. As for food, he said, "We share what we find and if we don't find anything, which happens, we don't know what to do."

Neither the rebels nor Gadhafi's forces are strong enough to hold Misrata or Ajdabiya, a key city in the east that is also a daily battleground. But the airstrikes and missiles that are the weapons of choice for international forces may be of limited use.

"When there's fighting in urban areas and combatants are mixing and mingling with civilians, the options are vastly reduced," said Fred Abrahams, a special adviser at Human Rights Watch. "I can imagine the pressures and desires to protect civilians in Misrata and Ajdabiya are bumping up against the concerns about causing harms to the civilians you seek to protect."

It is all but impossible to verify accounts within the two cities, which have limited communications and are now blocked to rights monitors such as the International Committee for the Red Cross.

Most of eastern Libya is in rebel hands but the force — with more enthusiasm than discipline — has struggled to take advantage of the gains from the international air campaign, which appears to have hobbled Gadhafi's air defenses and artillery and rescued the rebels from impending defeat.

The coalition includes the U.S., Canada, several European countries and Qatar. Qatar was expected to start flying air patrols over Libya by this weekend, becoming the first member of the Arab League to participate directly in the military mission.

The Obama administration is eager to relinquish leadership of the hurriedly assembled coalition. A NATO-led operation would require the unanimous support of member nations but two of them, France and Turkey, do not want the alliance to take over.

A compromise was emerging that would see NATO take a key role, but the operation would be guided by a political committee of foreign ministers from the West and the Arab world.

Obama defended U.S. involvement against criticism from several members of Congress, including some fellow Democrats.

"It is in America's national interests to participate ... because no one has a bigger stake in making sure that there are basic rules of the road that are observed, that there is some semblance of order and justice, particularly in a volatile region that's going through great changes," Obama said.

Visiting post-revolution Tunisia, U.N. Secretary-General Ban Ki-moon called on all nations to support the coalition effort in Libya. "Thousands of lives are still at stake. We could well see a further humanitarian emergency," Ban said.

Germany, which abstained in the U.N. Security Council vote, took a concrete step Tuesday to underline its reservations, pulling its ships and crews from NATO operations in the Mediterranean to avoid taking part in the operation against Libya,

Ajdabiya, a city of 140,000 that is the gateway to the east, has been fought over for a week. Outside the city, a ragtag band of hundreds of fighters milled about on Tuesday, clutching mortars, grenades and assault rifles. Some wore khaki fatigues. One man sported a bright white studded belt.

Some men clambered up power lines in the rolling sand dunes of the desert, squinting as they tried to see Gadhafi's forces inside the city. The group periodically came under artillery attacks, some men scattering and others holding their ground.

"Gadhafi is killing civilians inside Ajdabiya," said Khaled Hamid, who said he had been in Gadhafi's forces but defected to the rebels.

Ahmed Buseifi, 32, said he was in Libya's special forces for nine years before joining the opposition. He said other rebellious special forces had entered Ajdabiya and Brega, another contested city, hoping to disrupt government supply lines. The airstrikes, he said, leveled the playing field.

"If not for the West, we would not have been able to push forward," he said.

A U.S. fighter jet on a strike mission against a government missile site crashed Monday night in eastern Libya, about 25 miles (40 kilometers) outside the rebel capital of Benghazi. Both crewmen ejected safely as the aircraft spun from the sky during the third night of the U.S. and European air campaign.

The crash, which the U.S. attributed to mechanical failure, was the first major loss for the U.S. and European military air campaign.

By Tuesday afternoon, the plane's body was mostly burned to ash, with only the wings and tail fins intact. U.S. officials said both crew members were safe in American hands.

One of the pilots parachuted into a rocky field and hid in a sheep pen on Hamid Moussa el-Amruni's family farm.

"We didn't think it was an American plane. We thought it was a Gadhafi plane. We started calling out to the pilot, but we only speak Arabic. We looked for him and found the parachute. A villager came who spoke English and he called out, 'We are here, we are with the rebels,' and then the man came out," el-Amruni said.

A second plane strafed the field where the pilot went down. el-Amruni himself was shot, suffered shrapnel wounds in his leg and back. He propped himself up with an old broomstick and said he bore no grudge, believing it was an accident.

The pilot left in a car with the Benghazi national council, taking with him the water and juice the family provided. They kept his helmet and parachute.

Since the uprising began on Feb. 15, the opposition has been made up of disparate groups even as it took control of the entire east of the country. Only a few of the army units that defected have actually joined in the fighting, as officers try to coordinate a force with often antiquated, limited equipment.

In Misrata, the doctor said rebel fighters were vastly outgunned.

"The fighters are using primitive tools like swords, sticks and anything they get from the Gadhafi mercenaries," he said.

Mokhtar Ali, a Libyan dissident in exile who is still in touch which his family in Misrata, said rooftop snipers target anyone on the street, and residents trapped inside have no idea who has been killed.

U.S. Navy Adm. Samuel J. Locklear said intelligence confirmed that Gadhafi's forces were attacking civilians in Misrata, Libya's third-largest city, and said the international coalition was "considering all options" there. He did not elaborate, but Misrata is one of the cities that Obama has demanded that Gadhafi forces evacuate.

Airstrikes overnight into Tuesday hit a military port in Tripoli, destroying equipment warehouses and trucks loaded with rocket launchers. Col. Abdel-Baset Ali, operations officer in the port, said the strikes caused millions of dollars in losses, but no human casualties.

But while the airstrikes can stop Gadhafi's troops from attacking rebel cities — in line with the U.N. mandate to protect civilians — the United States has so far been reluctant to go beyond that. The Libyan leader was a target of American air attacks in 1986.

U.S. Defense Secretary Robert Gates and others said the U.S. military's role will lessen in coming days as other countries take on more missions and the need declines for large-scale offensive action.

Two dozen more Tomahawk cruise missiles were launched from U.S. and British submarines, a defense official said earlier in the day. Locklear, the on-scene commander, didn't give details but confirmed that brought to 161 the number of Tomahawk strikes aimed at disabling Libyan command and control facilities, air defenses and other targets since the operation started Saturday.

Locklear said the additional strikes had expanded the area covered by the no-fly zone.

Asked if international forces were stepping up strikes on Gadhafi ground troops, Locklear said that as the "capability of the coalition" grows, it will be able to do more missions aimed at ground troops who are not complying with the U.N. resolution to protect those seeking Gadhafi's ouster.