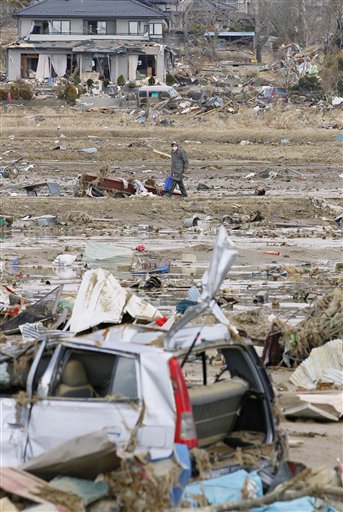 With supplies of fuel and ice dwindling, officials have abandoned cremation in favor of quick, simple burials in a show of pragmatism over tradition. Some are buried in bare plywood caskets and others in blue plastic tarps, with no time to build proper coffins. The bodies will be dug up and cremated once crematoriums catch up with the glut, officials assured the families.

In Higashimatsushima in Miyagi prefecture, about 320km northeast of Tokyo, soldiers lowered bare plywood coffins into the ground, saluting each casket, as families watched from a distance and helicopters occasionally clattered overhead.

"I hope their spirits will rest in peace here at this temporary place," said Katsuko Oguni, 42, a relative of the dead.

In Fukushima, the struggle to stabilize the plant suffered another setback Wednesday after a spike in radiation levels forced officials to pull workers and suspend restoring power to the Unit 2 reactor, a Nuclear and Industrial Safety Agency official said in Tokyo.

The setback showed how tenuous the situation remains nearly two weeks after the March 11 earthquake and tsunami knocked out power to the Fukushima complex, allowing radiation leaks that have seeped into vegetables, raw milk, the water supply and even seawater.

Broccoli was added early Wednesday to a list of tainted vegetables that already includes spinach, canola and chrysanthemum greens.

The nuclear crisis has complicated the government's response to the catastrophic earthquake and tsunami that swallowed up villages along the coast. The number of bodies collected stood at 9,301 at 9 a.m. Wednesday, with 13,786 people still listed as missing, the National Police Agency said.

Hundreds of thousands remain homeless. Schools, gymnasiums and other community buildings in the northeast are still packed with survivors, many of them elderly suffering after days without heat, medicine and hot meals.

In Fukushima, relief after the lights went on late Tuesday in the control room of Unit 3 made way hours later for concern over radiation levels in Unit 2, putting on hold plans to try restarting the plant's crucial cooling system. The sprawling nuclear complex has six units.

In the first five days after the disasters struck, the Fukushima complex saw explosions and fires in four of the plant's six reactors, and the leaking of radioactive steam into the air. Since then, progress continued intermittently as efforts to splash seawater on the reactors and rewire the complex were disrupted by rises in radiation, elevated pressure in reactors and overheated storage pools.

Tokyo Electric warned that time is needed to replace damaged equipment and vent any volatile gas to make sure the restored electricity does not spark an explosion.

"You're going to get fires now as they energize equipment," said Arnold Gundersen, the chief engineer at the U.S.-based environmental consulting company Fairewinds Associates. "It's going to be a long slog."

Radiation continues to leak from the site, though the main barriers appear intact, the U.S. Nuclear Regulatory Commission said.

The operator suspects some damage to an inner containment structure at Unit 2 as a result of an earlier explosion there. Also, spent fuel pools in damaged buildings could be releasing some radioactivity into the air.

"I think we have enough information to determine that there's not large holes or excessive releases from those containments, but we continue to see radiation coming from the site ... and the question is where exactly is that coming from," nuclear safety expert James Lyons said at a briefing Tuesday by the International Atomic Energy Agency.

The Health Ministry ordered officials in the area of the stricken plant to increase monitoring of seawater and seafood after elevated levels of radioactive iodine and cesium were found in ocean water near the complex. Education Ministry official Shigeharu Kato said a research vessel had been dispatched to collect and analyze samples.

Doses detected so far are low and not a threat to human health unless the tainted products are consumed in abnormally excessive quantities, government officials and health experts said.

Radiation levels in the air in Tokyo have been well below the global average for naturally occurring background radiation.