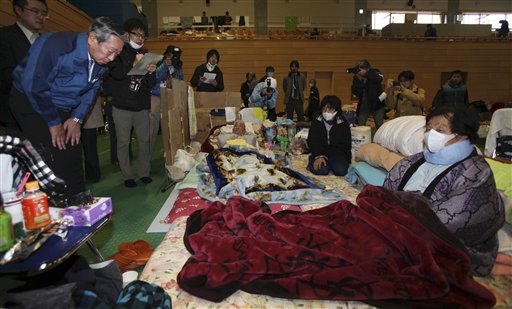 When the massive earthquake and tsunami rocked northeast Japan on March 11, residents who had been prepared by years of drills knew exactly what to do: They scrambled for cover until the shaking stopped, then ran for higher ground to avoid the giant wave.

But when word came that the disasters had left the Fukushima Dai-ichi nuclear power plant leaking radiation, residents were baffled. Should they run? Stay indoors? Drink the water? Eat the food?

Japan, famous for drilling its citizens on how to prepare for all manner of natural disasters, has done far less to prepare those who live near its many nuclear reactors for emergencies. This has left neighbors of the crippled Fukushima power station confused, misinformed and angry in the face of the country's worst-ever nuclear crisis.

"The only time I ever learned anything in school about nuclear stuff was when we studied about Chernobyl in history class," said Chiyo Maeda, a bank clerk who lived only 16 miles (25 kilometers) from the plant before her home was destroyed by the tsunami. "If we had known more before this happened, maybe we could have reacted more calmly."

Japan takes disaster preparedness seriously. Hundreds of thousands of Japanese take part in an annual drill every Sept. 1 — the anniversary of the 1923 Great Kanto Earthquake in Tokyo that killed 142,000 people. The exercise, which usually involves the military and civilians — including the prime minister — has sometimes even seen participation by the U.S. Navy.

And yet, in dozens of interviews with The Associated Press, residents evacuated from the most dangerous areas said they never received any information about how to avoid the radiation threat in an emergency, a basic requirement in some other countries that operate nuclear power facilities.

They hadn't heard of any drills organized by the government or the power company that runs the plant. And they were mystified by the radiation readings and technical language used by officials to explain the crisis.

Yuji Kusano, a maintenance worker at the doomed plant, said staffers were trained for fires and emergencies. "But nothing was done to educate the residents nearby," he said. "I just think no one ever expected this."

Government and utility officials conceded they did not have the resources, nor did they think it was necessary, to distribute pamphlets or conduct a public awareness campaign on what to do in the event of a nuclear emergency, except in the immediate vicinity of the plant.

Fukushima prefecture distributes leaflets in newspapers twice a month to 20,000 households immediately around the nuclear plant with basic instructions, like close the windows and stay inside. But that's only a fraction of the 245,000-or-so people living within 19 miles (30 kilometers) of the plant who have either been told to evacuate or stay indoors since the crisis began.

Takeyoshi Murakami, a prefectural official in charge of nuclear safety, conceded that authorities would have to review the entire public outreach program. "Nobody anticipated it would cover such a large area," he said.

Yoshihiro Amano, a grocery store owner about 3½ miles (6 kilometers) from the reactors, said he never paid much attention to them. "They mainly just said everything was safe" about the reactors, he said.

And though they did hold a drill three years ago at the Fukushima plant, only a tiny fraction of residents in the danger zone participated, while others had no idea it was even held.

"We have no manual on what to do in case of a nuclear accident," said Yukio Nishiyama, a disaster prevention official in Tamura, a city of about 41,000 that lies partly within the zone where officials have told residents to stay indoors. "So far the only thing we can do is just follow instructions from the government."

Other countries have varying requirements for nuclear emergency preparedness.

In the U.S., nuclear plants are required to provide annual detailed emergency plans to residents within the 10-mile (16-kilometer) evacuation zone. The Indian Point nuclear plant near New York City, which has preparedness plans typical of other U.S. nuclear sites, sends manuals to every resident and business in the evacuation zone explaining everything from evacuation procedures to the usefulness of potassium iodide pills in helping prevent radiation-induced thyroid cancer. Residents can sign up to receive warnings by telephone or email and there is a warning siren for those in the evacuation area.

In Britain, plant operators are required to distribute information to surrounding residents, including basic facts about radiation and its effects, and what to do in an emergency.

An internal disaster management plan for Tokyo Electric Power Co.'s Fukushima Dai-ichi plant obtained by the AP outlined contingency plans, coordination with the government and employee education about nuclear accidents. But the 82-page plan devoted only one sentence and four brief bullet points to the subject of public preparedness, including the need to inform people about radioactivity and the special nature of nuclear disasters.

Yuhei Sato, Fukushima's governor, said nuclear accident drills are held once a year, but only for selected local representatives.

"We can't possibly do them for tens of thousands of people," he told the AP.

"Even though we try to provide information regarding nuclear accidents as much as possible, it would have been difficult for most residents to anticipate a crisis like this to actually happen in their neighborhood," he said. "I think we should learn a lesson from what happened and review our contingency plans."

But even the most detailed preparedness can't solve one major problem: Many people simply don't pay attention until disaster strikes.

"Getting people to actually come for a briefing or participate in a drill or whatever is like pulling teeth," said Matthew Bunn, professor of public policy at Harvard University. "People who live near nuclear power plants usually don't know a whole lot more than other people do, about what the risks are or what the procedures would be, if there were a crisis."

Officials did hold a drill at Fukushima in 2008 that involved 4,000 people, including 1,800 residents from nearby towns.

The mock scenario was based on one of the reactors losing its cooling capacity and releasing radiation — similar to the current situation. The exercise was intended to give people more information about how they could protect themselves in an emergency, evacuation procedures and what medical assistance is available for radiation exposure.

In an evaluation report written after the drill, the Nuclear and Industrial Safety Agency said there was a need for better public education. But none of that appears to have trickled down to the people now affected by the disaster.

"Nobody here knows what a microsievert is," said 59-year-old Tomio Hirota, referring to the unit used to measure a dose of radiation. "I had never heard of that until all this happened. We don't understand what's going on, so we worry."

Chiho Watanabe, a teacher in Fukushima, said the school has regular fire and earthquake drills, but had done nothing to plan for a nuclear crisis. Nor did it have any monitoring devices for radiation.

"We had done absolutely nothing to prepare for a nuclear crisis. This experience serves as a lesson for us that we need to be better prepared," Watanabe said. "I hope others around the world who live near nuclear plants will study what happened here and learn from it."

Getting better, clearer information to the public could not come too soon for Yumiko Ogata, a rice and vegetable farmer in Fukushima who is worried that radiation, which has already contaminated water, milk and some vegetables, could destroy her own livelihood growing radishes and lettuce.

"I guess we just trusted the government that the nuclear plants were safe," she said. "What else could we do? The nuclear facilities never instructed us that we needed to be ready for something like this."