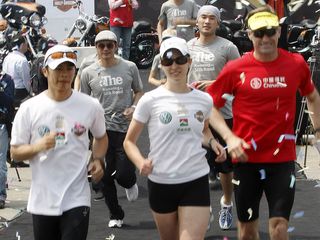 Kevin Lin, a Taiwanese ultra- marathoner who was one of the first modern runners to cross the Sahara Desert, vowed yesterday to complete his latest endeavor that will take him 10,000 kilometers through six countries.

"Even if it means no baths for two or three weeks, plus having to endure unbearable heat, I will complete the race." Lin told reporters in Kaohsiung as he prepared to start the "Running the Silk Road" race.

"Running the Silk Road, " which aims at raising awareness of water shortages in communities along the old Silk Road, is scheduled to start in Istanbul, Turkey on April 20 and to finish in Xian, in China's Shaanxi Province on Sep. 16.

The route will pass through Iran, Turkmenistan, Uzbekistan and Kazakhstan -- places that Lin said are all facing an acute problem of water shortage.

Lin said he is prepared to endure extreme heat on the segment between Uzbekistan and Xinjiang, China.

The surface temperature of Uzbekistan and Xinjiang around summer time can rise as high as 50 degrees Celsius (122 degrees Fahrenheit), according to Lin's sponsors.

The Taiwanese marathoner set off Tuesday on a run from Kaohsiung to Taipei in a symbolic launch of his journey.