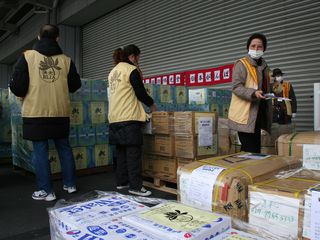 The compassion of Taiwan's people has been made evident in Japan as large amounts of aid from Taiwan began arriving in Tokyo 10 days after a horrific earthquake and tsunami ravaged northeastern Japan on March 11.

A first batch of 26 tons of relief supplies, including coats, masks, blankets, generators and mineral water, arrived at Narita Airport outside Tokyo, while another shipment of instant noodles, 298 generators and 200 heaters arrived at Tokyo's Haneda Airport.

A total of 400 tons of aid from Taiwan is set to be shipped to Japan by both air and sea in the coming days with the assistance of Taiwan's Ministry of Foreign Affairs and the Buddha's Light International Association (BLIA) , which is affiliated with Fo Guang Shan Temple in southern Taiwan's Kaohsiung.

Master Man Jun, director of the Fo Guang Shan Temple in Tokyo who was in charge of taking yesterday's deliveries, thanked the MOFA and Taipei-based China Airlines for their efforts in transporting the goods.

"We hope to quickly get this food and other relief supplies to survivors in the devastated areas who are hungry and fighting low temperatures," she said.

According to the Buddhist master, the doctors' association of Iwate Prefecture, one of the hardest-hit in the catastrophe, has approached the Fo Guang Shan local unit for help.

"We hope that the love and concern of Taiwan's people will help them overcome the difficulties," she said.

Workers at Sagawa Express, the courier hired to deliver the goods to disaster areas, said they were very surprised after hearing that Taiwan would contribute 400 tons of material aid to help Japanese victims.

"This is the largest amount of aid that I have heard about from any foreign country donor, " one of the workers said.

In the meantime, traffic was re-opened on the roadway from Saitama Prefecture to Aomori Prefecture -- one of the four most damaged prefectures in the disaster.