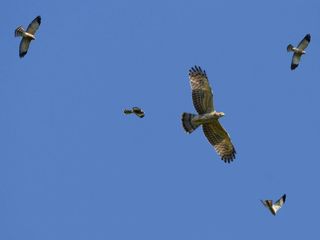 The National Freeway Bureau said yesterday it is working with local communities to protect wildlife as more than 15,000 animals have died after being killed by vehicles on the country's roads over the past two years.

Building on the success of a program in 2008 to protect Taiwan's endangered purple crow butterflies from freeway motorists, the bureau has now launched an initiative to save eagles in southern Taiwan.

It is hoping to reach a consensus with nearby business owners to shut off Freeway No. 3 lights across the Gaoping River at night because the living habits of eagles have been disturbed by excessive light, which has in turn led to more roadkill.

The businesses have objected to the idea because the river is a major tourist attraction that proves to be an even bigger draw when the freeway lights are on.

But the bureau has come up with different proposals to resolve the problem, including shutting down the lights when business is slow.

Although regarded by some as a thankless task, the job is crucial to protecting the lives of both animals and people, said bureau official Lien Hsi-ching.

The bureau first gained recognition for protecting animals in 2008 when it temporarily closed sections of Freeway No. 3 to protect Taiwan's endangered purple crow butterflies during their northern migration.